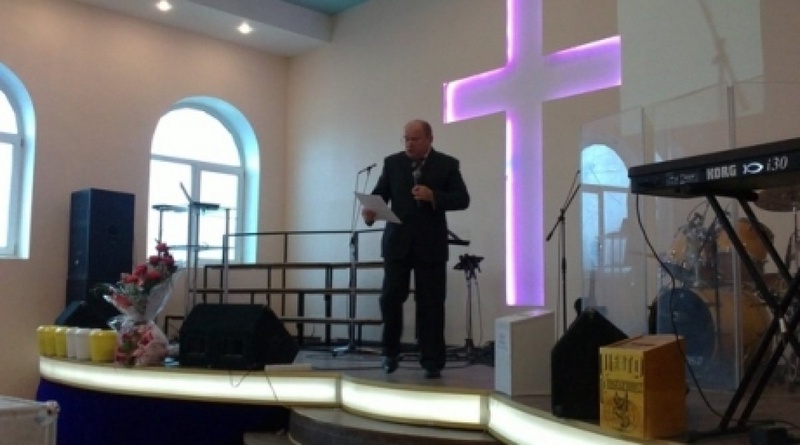 Photo courtesy of vkontakte.ru
Bakhytzhan Kashkymbayev, Pastor of Grace Church in Astana, has been arrested, Interfax-Kazakhstan reports citing the press-service of Astana Interior Department. The former leader of Grace Mission of Astana and currently its pastor was arrested on Friday, May 17, in suspicion of committing a crime worded as "intended infliction of severe harm to human health" in the Article 103 of the Criminal Code of Kazakhstan, the press-service wrote. The police reminded that the criminal case was initiated in October 2012 “after severe damage was caused to mental health of one of the members of the congregation of Grace mission”. The suspect is currently kept in the temporary detention facility of Astana Interior Department. The investigation is underway. Earlier Astana police found that the pastor of Grace church offered a red-colored drink causing hallucinations during his services. After one of such services, a 34-y.o. member of the church from Astana was taken to a psychiatric hospital and was diagnosed with “paranoid schizophrenia with high suicidal risk”. “The pastor of Blagodat religious union gives his parish a red-colored drink during the services. According to the statement of the Medications Testing Center, this drink contained phenolic substance and hallucinogenic ingredients that cause euphoria and relaxation,” Botagoz Akhmanova, inspector of the Astana Interior Department's press-service said. Police discovered in the building of the church and seized samples of the drink and the books supposedly containing the signs of religious feud and inspiring hatred. A psychological-phylological and religious check into the literature was appointed. Besides, a printing house of Umit-Nadezhda publishing office was located in the building. The printing house was used to reproduced the religious literature without obtaining a permit from the Religious Affairs Agency. The pastor denies that accusation and insists that him congregation drank only juice and red-colored karkade tea at church services. And speaking about the incident with the church member he says that she was brought into the state of mental breakdown by her own mother and sister: "That woman was treated at a psychiatric hospital. I saw her three months ago. Her relatives brought her into that condition. We never offered her any psychotropic agents. I walk before God. I cannot possibly do any such thing. We use either juices for the Lord's Supper, or karkade tea." This was not the first time that Grace church attracted attention of Kazakhstan police. A year ago Korean pastor and founder of the Grace Church in Kazakhstan Dr. Kim Sam Seong was arrested in Almaty for trying to illegally export $130 thousand from Kazakhstan without declaring the money at the airport. Later he explained to the police that those money were church offerings.