Mountain slopes left absolutely treeless by the storms of May 17 and June 27 pose serious threat to Almaty: Mayor25 августа 2011, 00:20 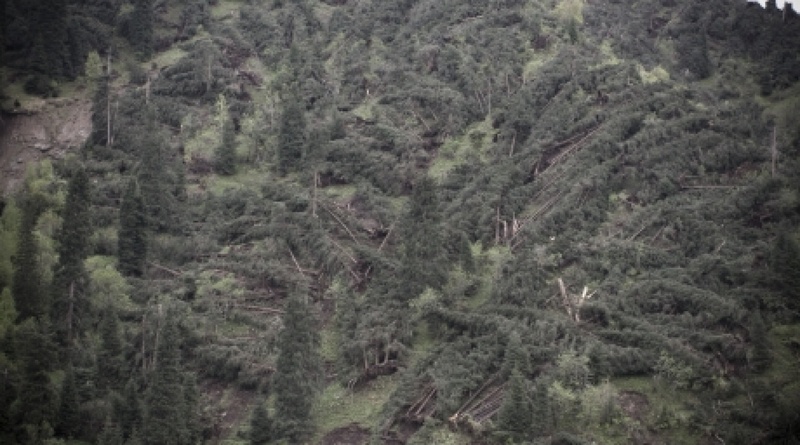 In the wake of the storms. ©Vladimir Dmitriyev
Mountain slopes left absolutely treeless by the storms of May 17 and June 27 are hazardous for Almaty, the largest city of Kazakhstan, KazTag Agency reports, citing Almaty mayor Akhmetzhan Yessimov. “After the clean-up operations [to take down trunks of the fallen trees] the slopes are extremely slippery. I’ve asked Emergency Minister Vladimir Bozhko to set up protective facilities to fence the city off avalanches and mud torrents”, the mayor said in his interview for Vremya newspaper. “Besides, snow can no longer be entrapped on the slopes [to secure soil moistening] (…) This might have a negative effect on the local tourism industry which has been growing at a fast pace. For instance, the city budget revenues from the tourism cluster in the Q1 2011 totaled $11.6 million. Medeo alpine skating rink and Chimbulak ski resort [located in the affected zone] generate most of the amount. Therefore, consequences of the storms must be neutralized within shortest possible time”, the mayor said. “There is a great risk of fires and the fallen trees are a favorable environment for timber worms that can hit alive trees as well”, he emphasized. According to the mayor, “about 90 000 trees were fallen in the upper part of the mountainous area(…) In the lower part of the area the clean-up works are almost complete (…) however, the clean-up teams lack tractors and sawmills. It is not a problem to get new teams organized, but they are unable to proceed without the equipment. In Almaty there are a number of enterprises ready to collect and process the fallen trees. But there is no legislation framework to allow them to do that so that they wouldn’t face charges later on”. Tengrinews.kz reported earlier that the two storms [May 17 and June 27] toppled 10 000 trees within the city, destroyed roofs of 37 buildings, damaged 62 poles of street lightening systems. In the Ile-Alatau National Park about 100 000 trees were toppled. Following the storms, there was an ad-hoc sitting held, with Emergency Minister Vladimir Bozhko among those in attendance. “At that time the Government decided to allocate money out of the state budget to eliminate the consequences of the storms. However, no money has been transferred so far”, the mayor said.
Malians pick new president in crucial run-off