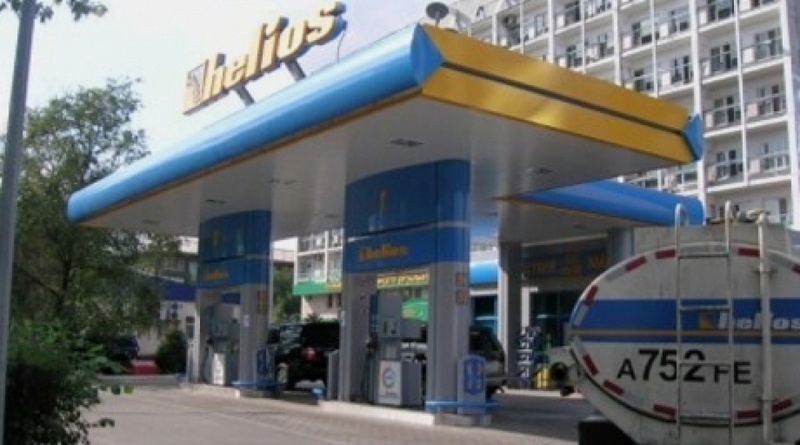 Helios fuel station. Photo courtesy of paritet-pm.org
Without further coordination of prices for diesel fuel and petrol with those in the neighboring Russia Kazakhstan will not be able to tackle fuel shortages, Denis Trandafilov, Marketing Director at Helios chain of gas stations, said in an interview for Novosti Kazakhstan . “In July 56 000 new cars have been registered in Kazakhstan, which means that the market is on the rise. At the same time petrol production for the H1 2011 dropped by 20%, with Russia’s fuel exports to Kazakhstan reducing twofold since the start of the year”, he said. “There is a tangible shortage of fuel (…) the only economic solution could be more favorable conditions for import of fuel as the domestic production capacities cannot meet the demand for high-octane fuel”, according to Trandafilov. “There should be attractive prices for importers … there is no other way to meet the domestic demand … However, prices in Russia and Kazakhstan don’t have to be the same. VAT in Kazakhstan is lower. 10% difference in price for fuel [between Kazakhstan and Russia] would be optimum”. Earlier Mazhit Yessenbayev, Chairman of the Agency for Fair Competition, said that fuel in Kazakhstan is 30-35% cheaper than in Russia. Sales of fuel through fuel stamps in Kazakhstan’s regions close to Russia are designed to prevent Russia’s citizens from buying up Kazakhstan’s petrol. August 22 Kazakhstan’s Ministry of Oil and Gas announced that there would be no petrol price hike in September. Respective statement was issued by the Ministry August 22. According to the Press Service, retail price ceiling will be as follows: $0.72 per liter of AI-92/93; $0.58 per liter of AI-80; and $0.61 per liter of diesel fuel. August 19 Tengrinews.kz quoted KazTag Agency’s report that Kazakhstan’s Government planned to raise retail price ceiling for fuel by 12-14% starting from September 1, with KazTag citing an unnamed source in the Oil and Gas Ministry. It was reported earlier that since the start of the year petrol price had grown by 17.4%, with prices set by oil refineries growing by 23%. Retail prices for diesel fuel have grown by 20% since the start of the year. Besides, Tengrinews.kz reported that In January – July 2011 petrol production in Kazakhstan had dropped 16% as compared to the like period of 2010. According to the stats, production figure for the period made up 1.5 million tons, 15.9% down against the same period of 2010.
Malians pick new president in crucial run-off