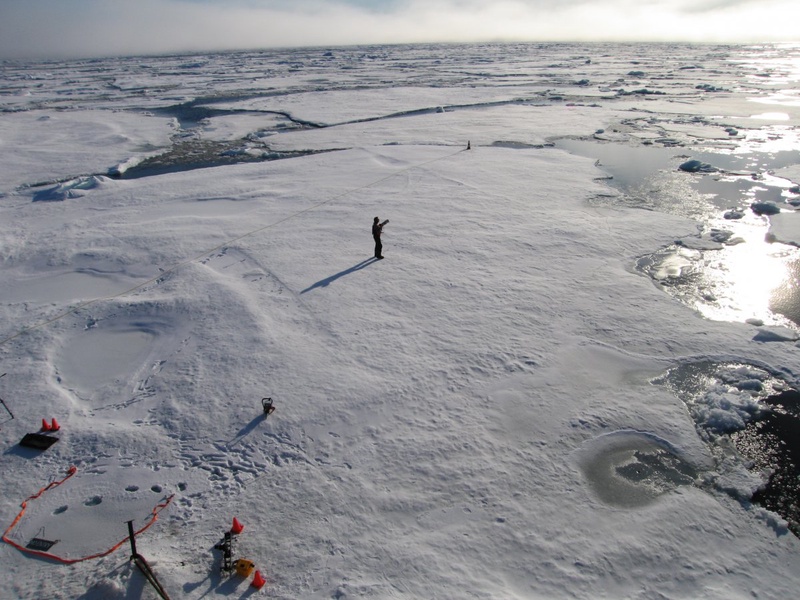 ©Reuters/Stuart McDILL
A vast store of water equivalent in area to Ireland lies beneath Greenland's icesheet, and it may provide answers to one of the big riddles of climate change, AFP reports according to scientists. In 2011, US scientists crossed the southern Greenland icesheet on an expedition to drill ice cores, a benchmark of annual snowfall. They were stunned when they drilled into a layer of compressed snow called firn -- for instead of piercing an icy sponge at a depth of 10 metres (33 feet) as expected, they encountered liquid water and ice granules instead. They carried out another drilling a few kilometres (miles) away, and got the same result when they reached the firn layer at 25 metres (81 feet). Seeking an answer to the liquid mystery, a NASA plane with terrain-mapping radar was brought in to fly over the zone, as well as ground-penetrating radar towed by a snowmobile. Radar returned bright reflections pointing to the presence of a vast reservoir of water beneath the ice. Extending down Greenland's southeastern flank, the hidden water covers a whopping 70,000 square kilometres, or 27,000 square miles. It is found at depths beneath the ice that range from five to 50 metres (16 to 160 feet). World's biggest snow cone? The store is believed to hold melted snow from the previous summer, according to the paper published in the journal Nature Geoscience. It works similarly to an aquifer below the ground, which is a spongey rock that holds water in its air spaces. In this case, the air spaces in the firn are occupied by water, resulting in something akin to the crushed-ice soft drink called a snow cone. "The surprising fact is the juice in this snow cone never freezes, even in the dark Greenland winter," said Rick Forster, a professor of geography at the University of Utah, who led the mission. "Large amounts of snow fall on the surface later in the summer and quickly insulates the water from the sub-freezing air temperatures above, allowing the water to persist all year long." The secret store appears to have been around for some time and was not initiated by man-made global warming, the scientists believe. But, they add, it could provide insights into the fate of the icesheet, a key question in climate science. A mighty slab of ice averaging 1,500 metres (5,000 feet) in thickness, Greenland is suffering unprecedented melt as global warming accelerates. In 2012, the icesheet lost a record 250 cubic kilometres (60 cubic miles) in volume, making it the biggest single contributor to the rise in world sea levels, said Forster. If the icesheet completely melted, it would drive up sea levels by around seven metres (21 feet). This is a doomsday scenario that most scientists discount, but even the loss of a large fraction would still drown vulnerable coastal cities. The discovery of a year-round sub-glacial reservoir sweeps away computer simulations that have tried to calculate this runoff. The simulations usually have water flowing into rivers, lakes or sub-glacial streams that eventually run into the sea, or else runs into the ice sheet through crevasses and gets frozen. The next step is to determine whether the reservoir helps or hinders the survival of Greenland's icesheet. "It might conserve the meltwater flow and thus help slow down the effects of climate change," said Forster. "But it may also have the opposite effect, providing lubrication to moving glaciers and exacerbating ice velocity and (iceberg) calving, increasing the mass of ice loss to the global ocean."