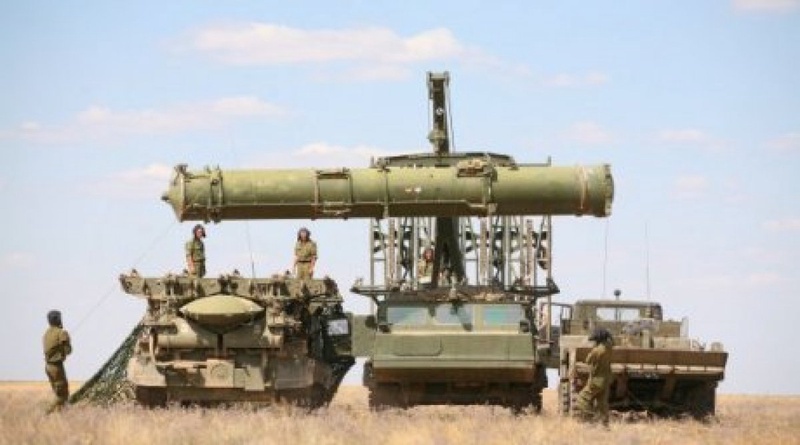 Air Defense drills at Kapustin Yar test site. ©RIA Novosti
Kazakhstan’s politicians and public figures are outraged with Russia's testing of its missiles at the territory of Kazakhstan. They believe that the time has come close the testing sites as the tests negatively affect the people of Kazakhstan,
Continuation
1.
Kazakhstan activists poised to create coalition to close Russian military test sites
Tengrinews.kz reports citing the President of the international anti-nuclear movement Nevada-Semipalatinsk Olzhas Suleimenov, President of Bolatkhan Taizhan Fund Mukhtar Taizhan and the political expert Rassul Zhumaly. In the beginning of June Russia successfully tested a missile with a range of up to 5 thousand km. it was launched from Kapustin Yar site near Astrakhan in Russia and hit the target at Balkhash site in Kazakhstan. “This is outrageous. The territory of one country is used by another country for testing missiles. This is the only case in the world. We have always stood against making Kazakhstan a nuclear waste site and now we will stand against other countries testing their military equipment at our territory,” Suleimenov said. “We have to make a survey, collect facts of moral, physical and material damage done by the tests and submit a request at the state level to review the old Soviet agreements.” Taizhan reported that he just got back from West-Kazakhstan oblast partially bordering Kapustin Yar test site that is used for launching the Russian missiles that land at Kazakhstan's territory. “We talked to the local citizens and with sick people. We have to raise the issue of closing the test sites at the territory of our country. Russia pays only $27 million in rent for 7 test sites in Kazakhstan per year. This is a miserable amount, considering that children are born sick and women become infertile,” Taizhan said. He also linked the tests to the recent waves of mass saiga mortality in Kazakhstan. Taizhan is outraged that Kazakhstan media largely ignores the tests. Orientalist and the political expert Rassul Zhumaly shares his opinion. He was surprised to find out about the missile hitting its target in Balkhash only from the Russian media. “What is out benefit from that? Russia rents many test sites in Kazakhstan and why do we need all that? It is unclear why Russia has to perform the tests at our territory,” Zhumaly said. Testing of the missile is not a lone case. On April 19, a military drone owned by Russia crashed not far from Balkuduk village in Atyrau oblast. The drone’s wreckage was transferred to Russia. After the crash the drone fell into three pieces. It was 12 meters long and had a wing spread of 2.5 meters. Back then Kazakhstan senator Gani Kassymov was expressed his disapproval and asked the Kazakhstan government to deal with the incident. “I understand from the media that a missile carrier with a blank charge crashed and fell into pieces in Atyrau oblast. The Emergency Situations authorities of Kazakhstan collected everything and kindly passed the pieces over to Russia. What is going on? I am asking to create a proper state commission involving the Foreign Ministry and the Defense Ministry to investigate of the incident. Our authorities should study the case and prepare statements and then we will see the reaction of the other party,” Kassymov told Kazakhstan Prime-Minister Serik Akhmetov. According to the Senator, the state commission has to send the results of the investigation to the Russian party so that “they acknowledge it and apologize”. By Roza Yessenkulova