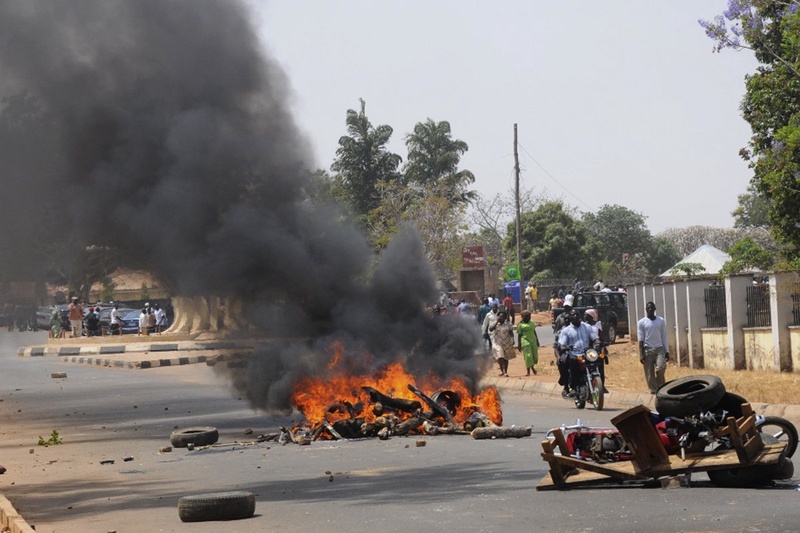 ©REUTERS
A suicide bomber rammed a bus into a church at a military barracks in restive northern Nigeria on Sunday and another detonated his explosives-packed car minutes later, killing 11 people and wounding dozens more, AFP reports. The first bomb attack struck minutes after Sunday mass in the town of Jaji, the latest such attack against Christians in the west African nation where the Islamist extremist group Boko Haram has waged a deadly campaign. A military officer said the first explosion did not cause any casualties, but drew people who were leaving church to the area ahead of the second blast. Those killed included soldiers, but it was not clear how many, a military spokesman said. It was not immediately clear how the bombers were able to enter the military barracks. While civilians are often allowed inside barracks in Nigeria, security has been tightened due to repeated Islamist attacks. "There were twin suicide bombings today at St. Andrew Military Protestant Church," army spokesman Brigadier General Bola Koleoso told AFP. "A bus first ran into the church and exploded about five minutes after service while a Toyota Camry parked outside the church detonated 10 minutes later." He said 11 people were killed and at least 30 had been taken to hospitals with various injuries. "Investigation into the bombings have commenced and the area already cordoned off," he added. A military officer said on condition of anonymity that "the first blast caused no casualties and curious worshippers gathered around the scene looking at the debris... and that was when the second blast happened." Jaji lies some 30 kilometres (20 miles) from the state capital Kaduna city which has been hit in the past by deadly attacks blamed on Boko Haram. The group has often targeted churches in its bloody insurgency, as well as police and other symbols of the establishment in Nigeria, Africa's most populous country which is divided between a mainly Muslim north and a predominantly Christian south. Although no group has claimed responsibility for Sunday's church bombings, the incident was similar to previous attacks blamed on the Islamist extremist group. In another incident on Sunday, two morotcycle-riding gunmen killed a Christian couple and their child in Kano, the main city in northern Nigeria, police and residents said. "Two gunmen on a motorcycle opened fire on the car, killing the woman and her child on the spot while her husband died later in hospital," Kano State police spokesman Magaji Majia told AFP. He said the couple's other child escaped unhurt in the shooting in the Kwanar Masallachi neighbourhood on the outskirts of the city. Residents said the victims were Christians on their way to church for the Sunday service. Last month, at least 10 people were killed and 145 wounded in a suicide church bombing and reprisal violence in Kaduna. Suicide bombings at three churches in Kaduna state in June that were claimed by Boko Haram sparked reprisal violence by Christian mobs who killed dozens of their Muslim neighbours, burning some of their victims' bodies. Muslim groups also formed mobs and killed several Christians. Violence linked to Boko Haram's insurgency in northern and central Nigeria is believed to have left some 3,000 people dead since 2009, including killings by the security forces. It has claimed to be seeking an Islamic state in Nigeria, Africa's largest oil producer. However, its demands have repeatedly shifted and it is believed to include various factions with differing aims, in addition to imitators and criminal gangs that carry out violence under the guise of the group.