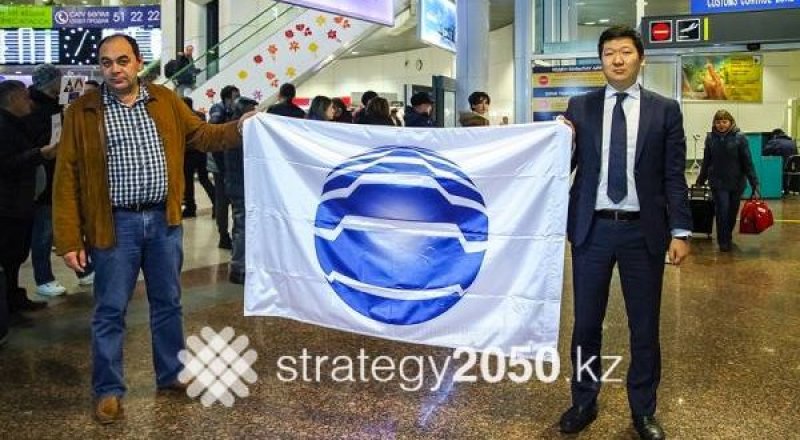 Anuarbek Musin, Commissioner General for the national section at the EXPO 2015, has received the flag for the upcoming EXPO-2017 that is to take place in Astana, Kazakhstan, Tengrinews reports citing Strategy2050.kz.

The flag was passed on to Kazakhstan during the closing of the EXPO-2015 in Italy. President of Italy Sergio Mattarella thanked the participants of the exhibition and expressed confidence in the success of the EXPO-2017 in Kazakhstan.

"We brought the flag of EXPO. It is not just a flag, it’s a symbol of new opportunities for our country. As our President said at the 70th Assembly of the UN in New York, Kazakhstan is ready to become a global hub for accumulation and promotion of green energy technologies. The theme of the EXPO-2017 - Future Energy - is very relevant," Musin said.

According to Musin, Kazakhstan’s national pavilion was named among top 3 pavilions that had developed the theme of the exhibition well and presented exceptional content.

Astana was chosen as the host city of the EXPO-2017 on November 22, 2012 during the General Assembly of the International Exhibitions Bureau (BIE) by 103 countries. The theme of the upcoming exhibition is Future Energy. The exhibition aims to establish an effective dialogue in sustainable energy and increase the body of knowledge in use of power without causing environmental damage.

Along with Astana, Dubai also received the flag of EXPO. Sheikh Ahmed bin Saeed Al Maktoum, Chairman of the Supreme National Committee for Expo-2020 Dubai was given the flag of the EXPO during the closing ceremony in Milan.

The EXPO-2020 in Dubai, the first EXPO in the Middle East, North Africa and South Asia (MEASA) is themed Connecting Minds, Creating the Future. The exhibition calls for collaboration in Mobility, Sustainability & Opportunity to overcome challenges faced by the global community in various spheres of life.

Meanwhile, the biggest international exhibition in Kazakhstan’s history will open from June 10 to September 10, 2017. The EXPO-2017 expects delegates from 100 countries and more than 2 million visitors from all over the world.

So far, according to Strategy 2050 website, “51 countries, 11 international organizations have confirmed their participation in the exhibition and 25 commissioners of national sections have been appointed”.