NATO released photographs Saturday of what it said were suspected Russian tanks in eastern Ukraine, having warned earlier that confirmation of their presence would mark a "serious escalation" of the crisis.
16 июня 2014, 12:42
Новостью поделились: человек
A screenshot from Youtube video

NATO released photographs Saturday of what it said were suspected Russian tanks in eastern Ukraine, having warned earlier that confirmation of their presence would mark a "serious escalation" of the crisis, AFP reports.

The US-led military alliance said the photographs showed Russian tanks stationed close to the Ukraine border in early June, then their subsequent movement, some of them being removed as part of Moscow's troop withdrawal.

On Thursday, it noted that the Kiev government had reported that three main battle tanks and several armoured vehicles had crossed into eastern Ukraine via Dovzhansky, and were later said to have been sighted near Donetsk.

"The tanks do not bear markings or camouflage paint like those used by the Ukrainian military," NATO said. "In fact, they do not have markings at all, which is reminiscent of tactics used by Russian elements that were involved in destabilising Crimea."

It said the images raised "significant questions concerning Russia's role in facilitating instability in eastern Ukraine and its involvement in the movement of military equipment from Russian territory into Ukraine." 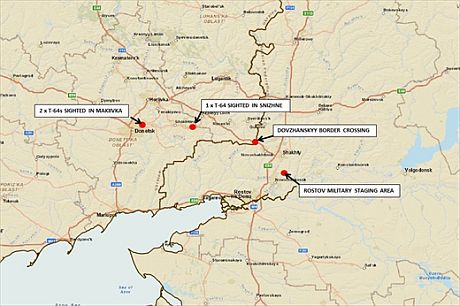 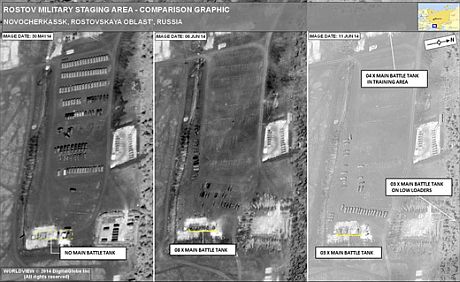 The deployment of a Russian military vehicles. 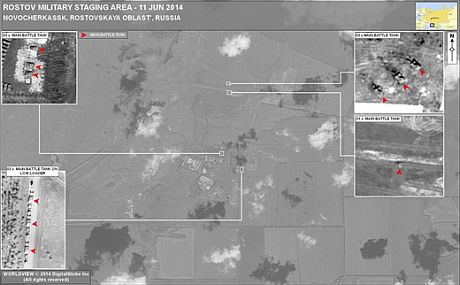 A detailed image of the deployment of a Russian military. 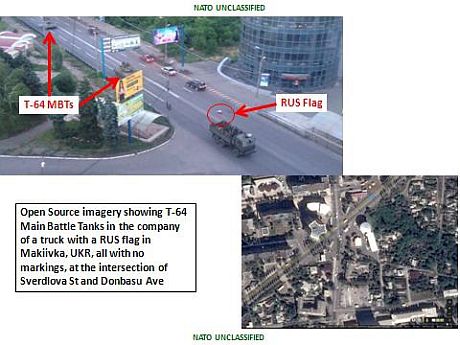 2 T-64 tanks driving through Makiivka, Ukraine at the intersection of Sverdlova St and Donbasu Ave. 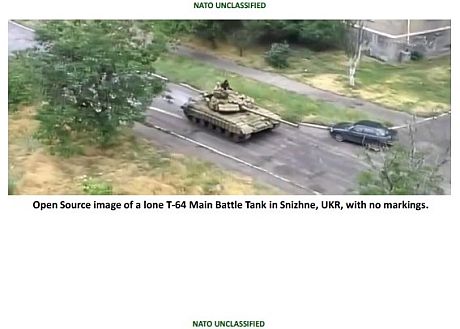 NATO head Anders Fogh Rasmussen had warned Friday that if confirmed, reports of pro-Russian groups in eastern Ukraine acquiring heavy weapons from Russia, including tanks, would mark a "serious escalation" in the crisis which took a turn for the worse Saturday with the shooting down of a Ukrainian military transport plane.

All 49 troops and crew on board died in the biggest single loss of life in the two-month insurgency which has now claimed some 320 dead.

On Friday, the Kremlin for its part claimed that two Ukrainian tanks had crossed into Russia before being intercepted by a border patrol.

Kremlin spokesman Dmitry Peskov, cited by the Interfax news agency, said President Vladimir Putin "told the foreign ministry to contact the Ukrainian side on the issue of the border violation by Ukrainian troops."

The NATO statement and photographs can be viewed here.