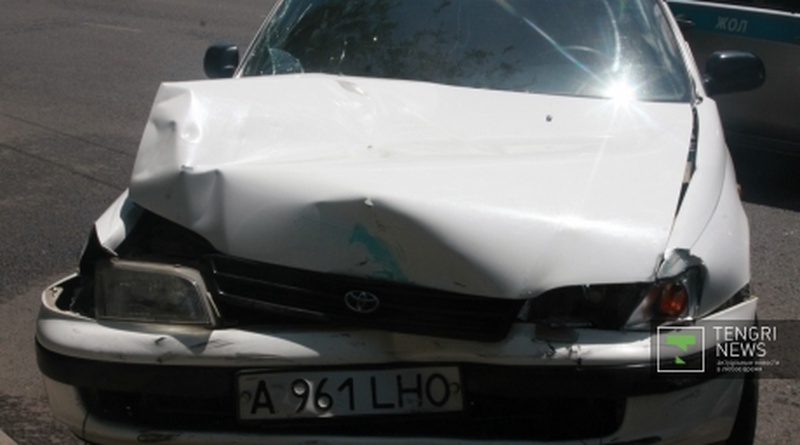 Damaged car at the accident site. Photo by Chingiz Dzhumagulov©
Deputy battalion chief of the Road Police Department Anuar Baitursynov, who was injured in the accident at the crossing of Furmanov and Abai streets on June 1, is in a bad condition, Tengrinews.kz reports citing deputy chief doctor of the Central City Hospital Laura Tastanbekova. “The condition (of the injured) is very bad. A neurosurgery was made. He has a basal skull fracture with haematoma of temporal lobe and a brain contusion. He is in intensive care on mechanical ventilation,” she said. Despite of the successful surgery, the doctors are concerned about the officer's life. “This is just the first day after the surgery. It is unclear what tomorrow is going to be like. It is possible that the brain edema will increase. Any scenario is possible,” Tastanbekova said. The accident involving the official car of the Road Police Department happened at the crossing of Furmanov and Abai streets at 10:42 a.m. The road cameras recorded that the accident was caused by the driver of the bus No.35. Driving West at high speed, Daewoo bus tried to cross the intersection at the restrictive signal and crashed into police Volkswagen Passat car driving in the northern direction. The collision threw the police car to the oposite direction lane where it smashed into two private cars driving south. According to witnesses, before the accident the bus driver was racing againt other bus along Abay street. One of the road police officers said that damage caused to Road Police Department's property may amount to $3-4 thousand. Alcohol tests confirmed that the bus driver was sober. He is currently under investigation.