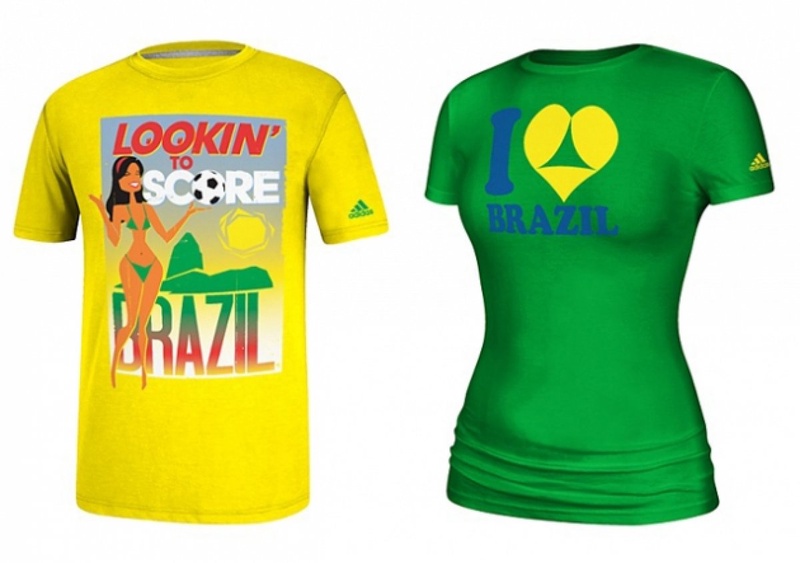 Photo courtesy of feministing.com
Brazil forced the withdrawal of a line of World Cup shirts bearing suggestive motifs seen as harming the country's image, AFP reports. Following a complaint by the state tourist board, official cup sponsor Adidas withdrew the shirts, which had gone on sale in the United States. One of the designs depicts a heart completing the phrase "I love Brazil" but curved to suggest a tanga-clad female backside. Another had a picture postcard view of Rio's Sugarloaf Mountain and a woman in a bikini holding a football with the double entendre strapline: "Lookin' to score." State tourism body Embratur said it "strongly repudiates the commercialization of products linking Brazil's image with sex" and had contacted Adidas to demand the shirts be withdrawn. Brazil's minister of state for women, Eleonora Menicucci, also complained of a "lack of respect towards our country." "It is unacceptable for a multinational producer of sports goods such as Adidas to sell T-shirts bearing images and phrases linking Brazil to sex tourism," she said. Adidas responded by saying it was withdrawing the products, adding: "It is important to stress that this was a limited edition range which was only available in the US." Brazilian President Dilma Rousseff says the World Cup host is happy to welcome foreign visitors -- around 600,000 are expected for the June 12 to July 13 tournament. But she has said the country will not tolerate sex tourism and will boost measures to combat it.