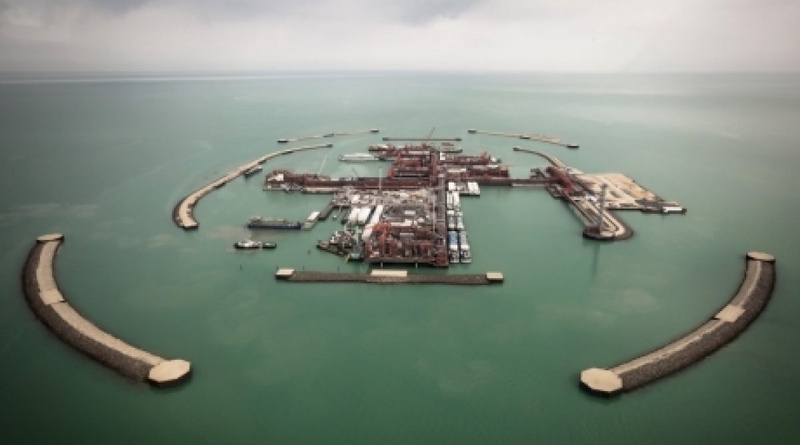 Kashagan oil and gas field, September 2013. ©Reuters
Oil production has started at Kashagan field in Kazakhstan,
Continuation
1.
Kashagan accident won't harm commercial production: Kazakhstan Minister
Tengrinews.kz reports citing the operator of the giant oil and gas field North Caspian Operating Company (NCOC). The consortium has re-activated the first production well and produced the first oil from the field in the North Caspian Sea on September 11, 2013. It was expected that the first oil at Kashagan will be produced on September 9, 2013, but the launch was later rescheduled. Kazakhstan national oil and gas company KazMunaiGas Chairman Sauat Mynbayev said that setting up the commercial production may take about three weeks. Commercial production is expected to stat before October 1, he said. The initial production is expected to be 370,000 barrels per day. It should reach a production rate of 1.5 million barrels per day. After the commercial production reaches the target flat level, Kashagan will become one of the world's key sources of hydrocarbons. On June 30, 2013 Kazakhstan President Nursultan Nazarbayev visited the artificial islands at Kashagan on the occasion of finalization of construction of the production infrastructure. That ceremony completed the preparatory stage of the project. Kashagan is the largest oil field in the Northern Caspian Sea. Its geological reserves are estimated at about 35 billion barrels. The consortium developing Kashagan under a production sharing agreement includes Eni (16.81%), KazMunayGas (16.81%), Royal Dutch Shell (16.81%), Total S.A. (16.81%), ExxonMobil (16.81%), ConocoPhillips (8.4%) and Inpex (7.56%) By Azhar Ashirova