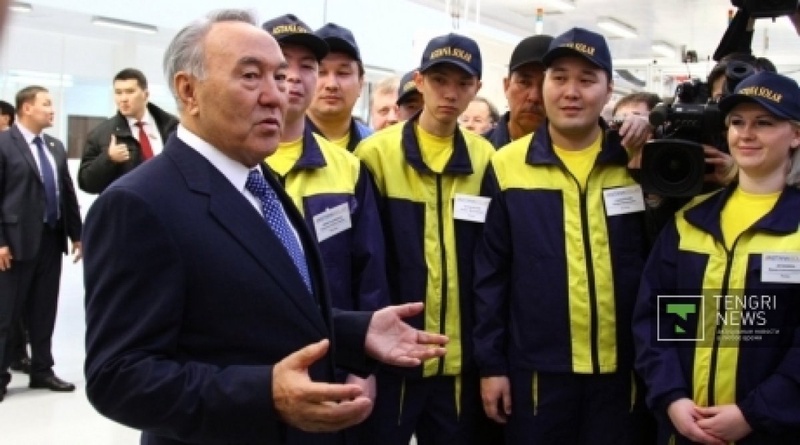 President talking to workers. Photo by Danial Okassov©
A plant for production of solar modules has been launched in Astana. Kazakhstan President Nursultan Nazarbayev launched the production line of
Continuation
1.
Kazakhstan to produce wind generators
2.
$13 million worth of solar batteries produced in Astana
Astana Solar, a branch of Kazakhstan national nuclear company KazAtomProm, Tengrinews.kz reports. “When we talk about industrialization, we first of all talk about innovations. About implementing something new, something that we haven’t done in Kazakhstan before. You are the employees of the very first facility producing solar modules in Kazakhstan. Green economy is our future. We have chosen this subject for EXPO-2017 and are preparing for it. These panels will be used one rooftops and in other locations. I saw similar facilities in South Korea and in the United States. Of course, it will not replace oil, gas and etc. in the nearest time, but we have to strive for it,” President told the plant’s employees. Astana Solar is the final technological chain of KazPV major project aimed at practical implementation of agreements on industrial-innovative cooperation between Kazakhstan and France signed during Kazakhstan President’s official visit to France. The project involves creation of a fully integrated production line for production of renewable energy sources Kazakhstan. The new plant will be producing solar batteries based on 100-percent Kazakhstan-made silica. The plant is equipped with automatic equipment of last generation. The nominal capacity of the produced solar modules will make 50 megawatt with a planned expansion to 100 megawatt. The President stressed that companies using such energy will become the most advanced. “If we start using these solar panels and wind energy, it will be very beneficial for Kazakhstan. It will enable us to used less cables and install less power lines. This is a big thing, a revolution. The future belongs to innovations. Innovations are made by science and new class experts: you are this kind of experts working on clean energy. There is no coal, smoke or gas here,” the President said. According to the press-service of KazAtomProm, the plant will reach its production capacity in the first quarter of 2013. The company will provide 175 jobs for Kazakhstan professionals. Some of them were being trained abroad. Production of the branch of the national nuclear company will be aimed both for local and foreign markets. Astana Solar has already signed several contracts with Kazakhstan-French company KATCO (uranium-producing joint venture of AREVA and KazAtomProm) to supply its produce to AREVA companies in France. KazAtomProm is Kazakhstan’s national operator of export of uranium and its compounds, rare metals, nuclear fuel for nuclear power stations, special equipment, technologies and dual purpose materials. The company’s main directions include: geological exploration, production of uranium, etc. The President was accompanied by Prime-Minister Serik Akhmetov, head of the President’s Administration Karim Massimov, deputy chairman of Samruk-Kazyna National Welfare Fund Kuandyk Bishimbayev, Kazakhstan Minister of Industry and New Technologies Asset Issekeshev, Astana Akim (Mayor) Imangali Tasmagambetov and chairman of KazAtomProm Vladimir Shkolnik at the event. Astana Solar was established in 2011 for implementation of the joint Kazakhstan-French project on development of solar energy technologies and creation of integrated production line for production of solar modules in Kazakhstan. By Gulnara Zhandagulova