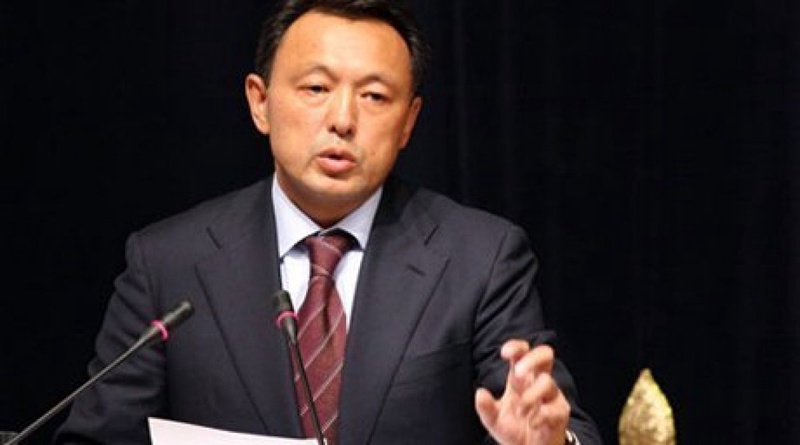 Mynbayev. Tengrinews.kz stock photo
Sauat Mynbayev, KazMunaiGas National Oil Company Head, believes production will be resumed at the giant Kashagan oilfield in the second half of the year. “I am not sure if the failed gas pipeline will be fully replaced with a new one; the findings of the investigation will only be available by the end of March. It’s too early to talk of any specific figures, estimated expenses related to repairs of the pipe (…) Production is likely to be resumed in the H2 2014, but we should be cautious when it comes to probability estimates(…) I wouldn’t voice any comments”, Mr. Mynbayev said. He emphasized that production estimates would be only clear after the findings are announced. Kazakhstan plans to get 2.5-3 million tons of oil at the giant Kashagan oilfield in the H2 2014, Tengrinews.kz reported March 3, citing the country’s Economic Affairs Minister Yerbolat Dossayev as saying in the country’s Majilis (lower chamber). “We hope the production will be resumed in the second half of the year, with the production output reaching 2.5-3 million tons of oil. We are looking forward to findings of the investigation [into the causes of pipes failure]”, he said. He emphasized that Kashagan is believed to be the most challenging oil production projects in the world. Commercial production at Kashagan started September 11, 2013. However, it was suspended 2 weeks later due to a gas leakage. The production process was resumed shortly. However, another leakage was detected in October. The Kashagan field, named after a 19th century Kazakh poet from Mangistau, is located in the Kazakhstan sector of the Caspian Sea and extends over a surface area of approximately 75 kilometers by 45 kilometers. The reservoir lies some 4,200 meters below the shallow waters of the northern part of the Caspian Sea and is highly pressured (770 bar of initial pressure). The crude oil that it contains has high ‘sour gas’ content. The development of Kashagan, in the harsh offshore environment of the northern part of the Caspian Sea, represents a unique combination of technical and supply chain complexity. The combined safety, engineering, logistical and environmental challenges make it one of the largest and most complex industrial projects currently being developed anywhere in the world. According to Kazakhstan geologists, geological reserves of Kashagan are estimated at 4.8 billion tons of oil. According to the project’s operator, the oilfield’s reserves are estimated at 38 billion barrels, with 10 billion barrels being recoverable. Besides, natural gas reserves are estimated at over 1 trillion cubic meters. “We expect Kashagan to come on stream shortly. The volume of crude to be produced hinges on the period of repairs currently under way. Our estimates stand at about 2 million tons for 2014”, Tengrinews.kz reported mid-January 2014, quoting the country’s Oil and Gas Minister Uzakbai Karabalin as saying at a press-conference following the sitting of KAZENERGY petroleum association.