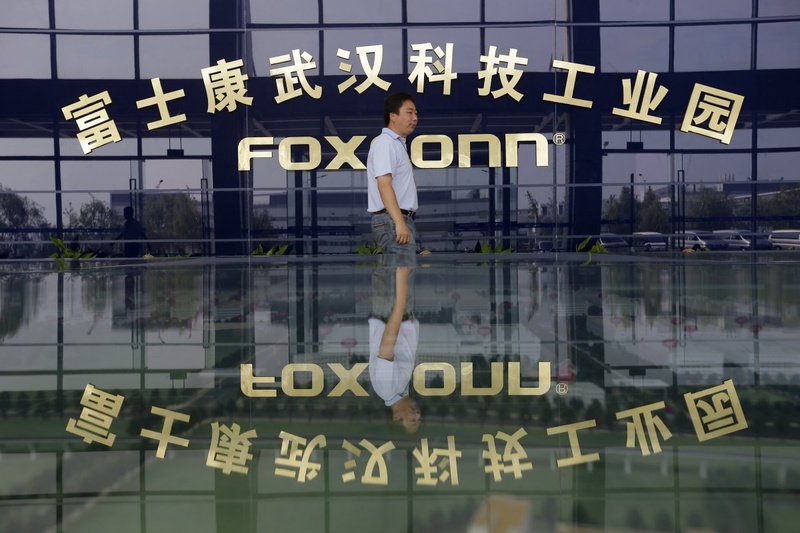 ©Reuters/Stringer
Taiwan's Foxconn, the maker of iPhones, iPads and other electronics in China, said Thursday it would invest $40 million in the United States to ramp up manufacturing of high-end products, AFP reports. The world's largest contract electronics maker will create around 500 jobs in Harrisburg, Pennsylvania as it puts $30 million into a plant to build precision tools, cables for electric cars and other advanced technologies, officials from the company and the state government said. Foxconn, also known as Hon Hai Precision, will commit another $10 million at Carnegie Mellon University in Pittsburgh, also in Pennsylvania, for research and development in robotics. Terry Guo, the company's chairman and founder, said he welcomed President Barack Obama's talk of a US manufacturing "renaissance" and picked Pennsylvania in part because the company already has small operations in Harrisburg, the state capital. Guo decided to discuss individual contracts but indicated that Foxconn did not intend to shift to the United States production of iPhones or iPads, designed by iconic US company Apple but assembled overseas. "We don't want to move the hand-to-hand worker jobs, we want to move the intelligent jobs -- the skilled labor jobs," Guo told reporters after a ceremony with Pennsylvania officials in Washington. Obama has vowed to put a top priority on reviving US manufacturing, which has steadily declined and cost millions of jobs in recent years as factories move to nations with cheaper labor. The president frequently hails the creation of some 500,000 manufacturing jobs since the sector's low point in 2010, but he faces an uphill task in fulfilling a goal declared in his re-election campaign to create another one million manufacturing jobs by the time he leaves office in 2017. Foxconn has come under a spotlight over labor unrest in its Chinese plants. At least 13 workers in China died in 2010 in apparent suicides, which activists blamed on tough working conditions. The company has denied the accusations but raised wages by nearly 70 percent at its China plants in 2010.