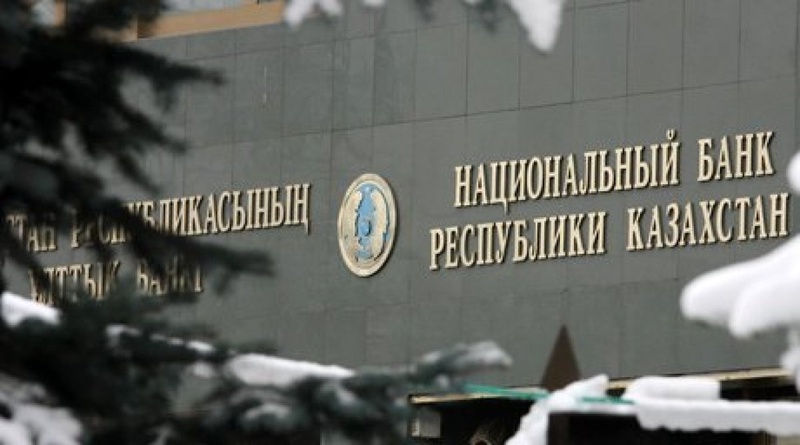 Kazakhstan’s Central Bank. © Yaroslav Radlovsky
Starting from February 11, 2014 Kazakhstan’s Central Bank decided to stop supporting the tenge exchange rate, decrease currency interventions and stop interference with shaping the tenge exchange rate, the Central Bank announced. The new exchange rate is expected at 185 tenge for 1USD (up from 155 tenge for 1 USD). Given the high importance of the currency exchange rate, the National Bank has been maintaining the rate at 145-155 tenge for 1USD. It enabled to maintain economic stability. The country’s GDP grew by 6% in 2013, with the inflation rate hitting record low of 4.8%. The Central Bank elaborated that Kazakhstan’s economy is closely integrated into the global economy and the National Bank should take into account the situation in the global financial and commodities markets. Among the reasons behind the decision the Bank cites the lingering uncertainty of the Russia’s rouble. Back in 2013 the rouble weakened by 7.1% against the US Dollar, with the downward trend persisting in January 2014. Another reason was the state of the Kazakhstan’s balance of payment. Despite the current account surplus, there has been an increase in imports, including imports of consumer goods. Besides, Kazakhstan has been facing high devaluation expectations. To prevent excessive volatility, the National Bank has had to intervene in the currency market. To further slash down the inflation rate to 3-4%, the National Bank plans to shift to inflation targeting, with the measure calling against tight regulation of the tenge exchange rate. Not to allow destabilization of the financial market and the overall economy, the National Bank sets a new fluctuations corridor at 185 tenge for USD1 plus/minus 3 tenge with some measures to level fluctuations in the short term. In the longer run, the tenge exchange rate will be defined by macroeconomic factors, the statement reads.