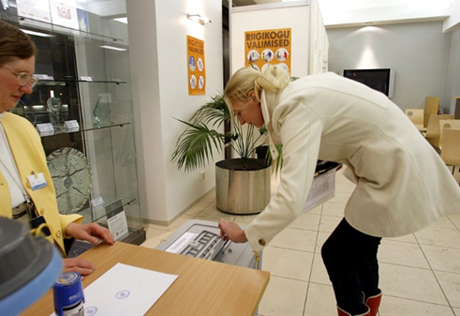 ©AFP
Estonia's center-right government won a fresh mandate in a general election Sunday, as voters gave it the thumbs up for steering the Baltic state out of a breathtaking recession.

"The voters have had their say," Ansip told reporters.

The coalition did not suffer ballot-box punishment for the biting austerity drive it launched as the global economic crisis struck the nation of 1.3 million.

Ansip's Reform Party won 33 seats, up three on its 2007 general election tally. Its junior governing partner the Pro Patria and Res Publica Union jumped from 19 to 23.

Now the two parties were preparing for potentially tough talks on how to share out the ministerial portfolios, a post-election tradition in Estonia.

Gaining a majority had been a key goal for the coalition, which was originally made up of three parties in 2007.

But after the left-leaning Social Democrats walked out in a 2009 revolt over the anti-crisis budget cuts, the government had to struggle on with a minority of 49 seats.

The Social Democrats' also made gains Sunday: austerity-weary voters boosted their share of parliamentary seats from nine to 19 seats.

"People have started to understand that it is their state and they need to have their say," said Social Democrat lawmaker Eiki Nestor.

But Estonia's left-leaning Center Party remained the main biggest opposition force, although their 26 seats haul was two less than in 2007.

It taps support from the working class and Estonia's 300,000-strong Russian-speaking minority: only a third of them however are Estonian citizens and thus able to vote.

But during the election campaign that party faced claims of shady Russian financing, which it denied, dismissing the accusations as mudslinging.

"I'm glad we kept in second place, despite the brutal attacks against us," said Center's leader Edgar Savisaar, who is mayor of the capital Tallinn. "Some forecast we'd suffer disaster, but they were wrong."

Ansip has been prime minister since a 2005 reshuffle, a year after Estonia joined the European Union.

In 2007, he was the first Estonian premier to be returned to office in a general election since independence from Moscow.

Estonia shifted rapidly to a free market after independence.

Ansip has been at the helm as it swung from boom to slump and then to recovery.

In 2009 the economy shrank by a massive 14.1 percent in what was one of the world's deepest recessions. By 2010 however it recorded 3.1 percent, and this year's growth forecast is for around 4.0 percent.

Even before the crisis, the government's conservative policies brought in budget surpluses and the lowest debt in the 27-nation EU.

With recession, it opted for a tough austerity plan that the opposition attacked, accusing him of not taking into account its social consequences.

Unemployment for example had risen five-fold to almost 20 percent by early 2010.

Ansip's administration has replied that today, the jobless is down to just over said 10 percent, even if some experts say that figure excludes those not registered as unemployed or who have simply given up job-hunting.

A key aim of the austerity drive was to ensure Estonia met financial criteria for adopting the euro -- it did so on January 1.

Turnout was 62.9 percent Sunday, up from 61 percent four years ago, official figures showed.