The United Nations has recognized desertification as one of the global environmental problems. Kazakhstan has joined the efforts to fight desertification but there is a long way to go and many obstacles to overcome.
03 октября 2014, 17:09
Aral Sea dry bottom ©RIA Novosti/Alexei Kulikov

"Desertification is one of the most alarming global environmental degradation processes. According to the United Nations General Assembly, almost a third of the planet is currently endangered with desertification; over a billion people may find themselves practically in the middle of a desert. Each year, desertification and drought lead to loss of agricultural production worth around 42 billion dollars," the press release of the first international scientific-practical conference on desertification in Central Asia reads.

Just recently the NASA published its satellite photo of the Aral Sea. It showed that a big portion of it disappeared for the first time in centuries, leaving behind a desert of dust, salt and chemicals.

The event was designed to identify trends of desertification in Central Asia and methods of dryland management.

The project was organized by the United Nations Development Program (UNDP), the Institute of Geography of the National Scientific and Technological Holding "Parasat" of the Ministry of Education and Science of Kazakhstan, and the National Geographic Society of Kazakhstan under the auspices of the Nazarbayev University.

Around 120 experts attended the event, including representatives of research institutions and universities, ministries and departments of Kazakhstan, China, Mongolia, Azerbaijan, Kyrgyzstan, Tajikistan, Uzbekistan, Russia and Turkmenistan. The problem of desertification is more than relevant in Kazakhstan, where 62.2% percent of all the territory is natural semi-deserts and deserts. In fact, the country is the one most susceptible to desertification among the Central Asian countries.

Rates of soil degradation in Kazakhstan are alarming. ECOSOC Annual Ministerial Review showed that in 2008, of 182.8 million hectares of pasture land in Kazakhstan, 26.6 million hectares were under a high degree of desertification. Another 169,700 hectares "had undergone a change of use in the course of construction works, processing of extracted substances or geological exploration", the Review said.

Drylands in Kazakhstan are widely used in agricultural production but of the 90 million hectares of farmland about a third is subject to erosion and deflation, including the territories of steppes and forest steppes. Due to the fact that it is in the dry and arid regions where the bulk of all agricultural produce in Kazakhstan is made, desertification in these regions poses a real threat to the food security of the country. Abdulla Saparov, a fellow at the Uspanov Kazakh Research Institute of Soil Science and Agrochemistry, wrote that more than 75% of the territory of Kazakhstan is subject to soil degradation and desertification. In addition, over 14% of pastures reached an extreme degree of degradation or are completely degraded, making their usage impossible.

According to Saparov, the desertification of huge territories is accompanied by soil contamination and an overall decrease of its biological capacity. Preliminary evaluations show that the damage caused by the land degradation and desertification along with erosion of arable land and soil salinity makes around $6.2 billion.

“The influence of anthropogenic factors is seen almost in all the natural landscapes, especially in the Aral Sea region, where degradation and desertification processes are becoming more widespread,” he wrote.

The conference was organized to address precisely these issues. "It is no secret that starting in the 1960s the territory prone to desertification in Kazakhstan has grown by 10-12 percent to date,” director of the Institute of Geography Ahmetkal Medeu said at a briefing as part of the conference.

He noted that while desertification predominantly affected arid and sub-arid areas, that is the semi-desert and desert areas, and areas overly intensively used for agriculture, the desertification processes have been gradually moving towards the north into forest-steppe and steppe zones where Kazakhstan’s major grain-producing areas are located.

National Coordinator of the Program for Sustainable Land Management of UNDP Yerlan Zhumabayev said that the most problematic areas in Kazakhstan were the Balkhash region and Aral region. The problem of desertification should not be confused with the natural desert areas that constitute ecosystems of their own with their natural flora and fauna. But it is necessary to focus on the problematic areas by putting economic efforts and encouraging agriculture there, he said.

For Medeu, managing the process of desertification requires solving a set of complex problems. “This set of works includes involvement of individual, regional and country-specific projects. In this respect, all three directions lead to concrete actions to prevent and reduce negative desertification," he said.

According to the director of the Institute of Geography, a state program was implemented in Shetsky District of Karaganda Oblast to address decertification. In addition, works are underway in the degraded dried bottom of the Aral Sea and in the area of intense land degradation in Mangistau Oblast. "Focal projects are there, but in order to undertake specific activities, of course, it is necessary to carry out appropriate research," he added.

Previously the press-service of Kazakhstan Environmental Protection Ministry said that a special National Center would be created to attract non-governmental and international organizations, local communities and business structures to fight against desertification.

“A Central Asian regional center for countering desertification will be created in Kazakhstan by the International Commission on Sustainable Development of Central Asian Countries,” the Ministry stated.

According to the authority, the national action plan on countering desertification was to be brought into compliance with the 10-year strategic plan of the UN Convention to Combat Desertification.

Kazakhstan ratified the UN Convention to Combat Desertification on July 7, 1997 and in 2005 adopted a National Action Program 2005-2015 as part of its efforts to combat desertification. 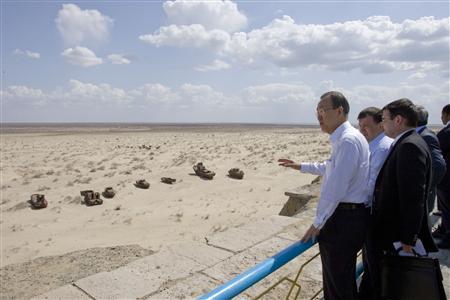 Last year, the Ministry informed that the first phase of the project on regulation of Syrdarya water level and preserving the northern part of the Aral Sea was completed. The level of the Aral Sea’s northern part reached 42 meters, three meters above the previous level.

This decreased the salinity of water and helped restore the biological diversity of the sea's flora and fauna. With less dust and salt lifted by the winds form dried up sea bottom, negative impact on the environment was reduced.

The Global Bank was implementing a project on preservation and adding forest area in the country. Saksaul was planted on 25,383 hectares of the dry bottom of the Aral Sea.

Hopefully, the Program will continue bearing results as there is only one year left before it ends. Obviously, another comprehensive program will have to be introduced to consolidate the progress achieved so far and to continue helping our environment.