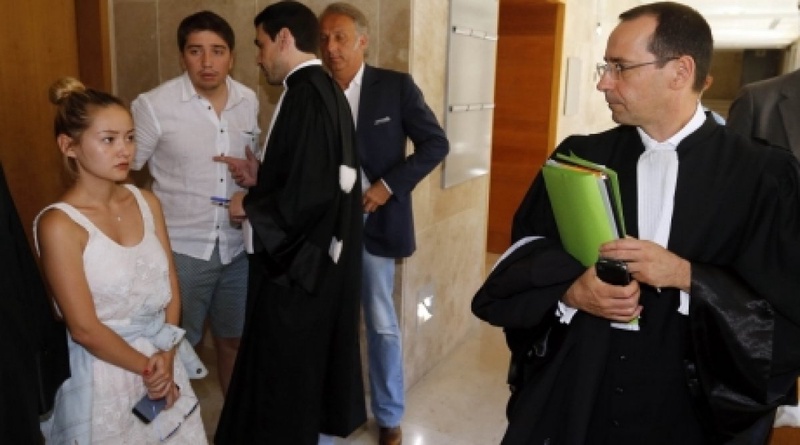 Mukhtar Ablyazov's daughter Madina (L), her husband Ilyas (2nd L) and Mukhtar Ablyazov's lawyer (R) after the court hearing. ©Reuters
French court has decided to leave Mukhtar Ablyazov in custody until the decision on his extradition is made,
Continuation
1.
Ablyazov appeals demanding to dismiss his extradition case
2.
French court urged to extradite Kazakhstan tycoon Ablyazov
3.
Kazakh tycoon to appeal French extradition order
Capital.fr writes. This went against best hopes: according to Ablyazov's lawyer, his client opposes the extradition to either Ukraine or Kazakhstan. “He has been remanded in custody,” Ablyazov’s lawyer Bruno Rebstock said after the hearing in Aix-en-Provence. The judges ruled that Mukhtar Ablyazov could not provide enough guarantees to be released on bail pending the decision on his extradition. A judge in the Aix-en-Provence court interviewed Mukhtar Ablyazov Thursday morning. The judge notified him that he was the object of an extradition request from Ukraine. Ukraine now has 40 days to provide all the required documents to substantiate his extradition from France. Ablyazov's French lawyer explained why the extradition request came from Ukraine: “Ukraine is a friendly country, while Kazakhstan came under a lot of pressure over expulsion of his (Ablyazov's) wife for possession of fake passport,” Charles Bavier told Reuters. Another source close to the case said that Ukraine was chosen because the BTA bank had important interests (it is suing Ablyazov in London court for embezzlement of over $6 billion from the bank). There is no extradition treaty between France and Kazakhstan, interference of Russia would be subject to limitations, so this leaves Ukraine as the best choice. According to Charles Blavier, Ablyazov was arrested "by a score of policemen who did not hesitate to break into his house, masked and armed." Almost two months before that Ablyazov's wife blamed Italian police for mistreatment accusing them of allegedly calling her a "bitch". Ablyazov continued the blaming of European nations for his misfortunes by saying that his life had been in danger since he left Kazakhstan and his security was not guaranteed if held in a British prison. Mukhtar Ablyazov was arrested not far from Cannes. An official representative of the Regional Service of France’s judicial police in Marseille also confirmed that the exile Kazakhstan tycoon was arrested. According to him, Ablyazov was arrested on July 31 in Mouans-Sartoux not far from Grasse. The official said that French authorities received the extradition request from Ukraine. He added that the Kazakh ex-banker would most likely be transferred to Paris where the court will decide on his extradition. Ablyazov is wanted in Kazakhstan for embezzlement, fraud, money laundering and siphoning off BTA bank's funds through dummy companies and illegal financial schemes. BTA bank is pursuing Mr Ablyazov in London’s court for misappropriation of at least $6bn from the bank. FT called this case "one of the biggest and most complex fraud cases in banking history".