A new wave of feminism has taken hold in Britain this year: young, irreverent, and fuelled by social media. Three online projects founded in 2012 -- a website for submitting experiences of sexism, a campaign against topless women in newspapers and a blog satirising women's portrayal in the media -- have won tens of thousands of supporters. They have earned national press coverage and admiration from veteran feminists who thought their cause had faded into the background. "Initially we just made it for our friends and we didn't really think that it would take off," said Rhiannon Coslett, 25, a co-founder of the Vagenda blog. She and Holly Baxter, 23, impoverished flatmates who had studied together, started the blog after a wine-soaked evening ridiculing women's magazines. It went viral on its first day with a post of "Stock Photos Of Women Looking Remorseful After Sexual Encounters". 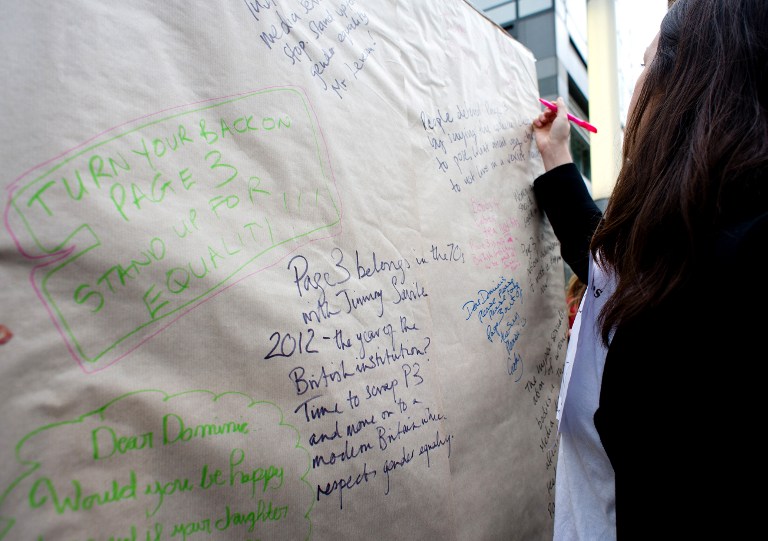 A feminist campaigner rights a note on a banner during a protest. ©AFP

Nine months later, the Vagenda has 30,000 readers each day, while the two have given up their day jobs and have a book deal. This week [NOVEMBER 18] they were among 600 people at a London theatre for an anti-sexism stand-up comedy night on the 42nd anniversary of Page Three, the page dedicated to topless models in Rupert Murdoch's tabloid newspaper The Sun. The audience were treated to a "feminist burlesque" and a rap history of feminism, while comedian Viv Groskop pointed out that with 26,241 female nipples having appeared in The Sun to date, "it's kind of not really news". Behind the event were No More Page 3, a campaign asking The Sun to remove the feature, and Everyday Sexism, which compiles accounts of discrimination and harassment. Both were started this year. More than 57,000 people have signed the No More Page 3 petition, while 11,000 submissions have been made to the Everyday Sexism website and Twitter feed. Comedian Lucy Porter told the audience how she was groped by a well-known colleague in the 1990s, "in an era when you were told to laugh things off". 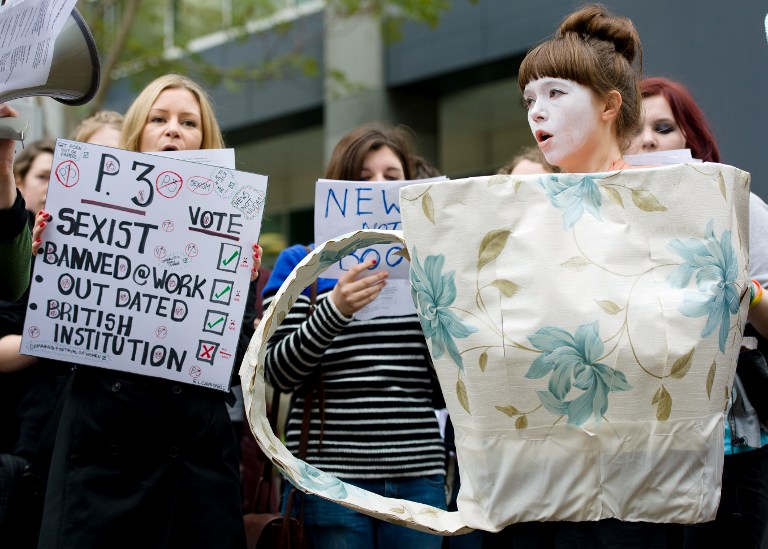 "If it happened now I could tweet about it," she added. Young feminists credit social media with bringing people together and creating space for views that might be mocked elsewhere. "We get a lot of messages from teenage girls who come from small towns and feel like they're the only feminist in the village," said Coslett. Everyday Sexism founder Laura Bates, 26, said: "I think women feel a real sense of relief about being able to talk about these things and be taken seriously. "A disabled girl wrote that since she was seven she'd had constant jibes about women driving as she moved around in her mobility scooter, and a woman in her 90s wrote to say exactly the same thing." Natasha Walter, the 45-year-old author of "Living Dolls: The Return of Sexism", wrote in the Times this month: "It's fantastic to see how these online communities have breathed life into struggles we thought were over." Despite huge advances in the 20th century, British women are underrepresented in politics and business, while earning about ten percent less than men. Campaigners also speak of a pervasive culture of sexism. Yet so far this century, feminism has been a minority pursuit. "We have always felt a bit reluctant to wholeheartedly jump in with the feminist movement that exists on the Internet, because I think a lot of it can be quite alienating to young women -- it's very academic, it's theoretical, a lot of it's really angry, it's extremely po-faced," said Coslett. 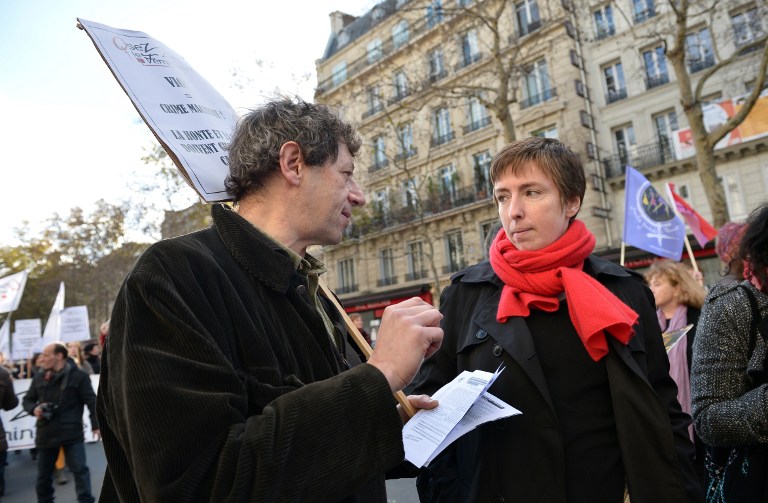 She credits Caitlin Moran, whose book "How to be a Woman" -- part comic autobiography, part polemic -- became a bestseller this year, with reaching "thousands and thousands of women who wouldn't call themselves feminists". Women's rights campaigners still face hostility, especially online: when Bates set up Everyday Sexism she received hundreds of abusive messages a day, culminating in specific threats that led her to call police. But the site has now drawn numerous submissions from men angered by the experiences of women close to them, while others say the site has made them re-examine their own behaviour. Lucy Anne Holmes, 36, founder of No More Page 3, finds women and men keen to join her battle against the topless photo that is "the largest female image in the country's best-selling newspaper". When No More Page 3 held a protest outside News International, the Murdoch subsidiary which publishes The Sun, the company called the police -- who arrived and promptly signed the petition. Neither the Vagenda writers, nor Holmes and Bates, were involved with activism before this year, but all say there is much more to be done. "A mum wrote in to say her little girl had asked if she could be turned into a boy so that she could go into space," Bates said. "As long as even one little girl is growing up thinking she has to change who she is to be what she wants to be, the fight isn't over." by Judith Evans from AFP