In a sweltering training camp on a tropical Thai island, sweaty tourists wearing oversized gloves and baggy shorts slam their fists, knees, elbows and feet into a row of heavy bags. Welcome to the latest craze in extreme fitness -- Muay Thai boxing. With worries growing about the world's bulging waistlines, many foreigners are flocking to Thailand to spend their holidays not on the beach, but following a punishing regime of training in Muay Thai and other martial arts. Some are going to even more extreme lengths, quitting their jobs to spend weeks or months training in an effort to win their long battles with obesity or hone their skills in the hope of becoming professional fighters. Jordan Henderson, 26, left behind his London lifestyle of long work days, parties and overeating after the doctors warned him that he faced looming heart problems due to his weight of nearly 184 kilograms (29 stones, 406 pounds). 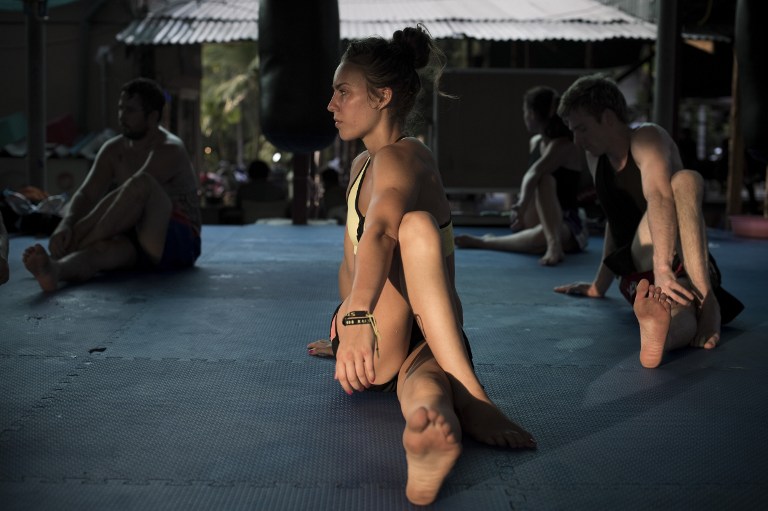 After one month at a training camp in Phuket off Thailand's southern Andaman Coast, he had already shed about 20 kilos. "You're in an environment where it's hot all the time, surrounded by people doing fitness," he said after an early morning workout. "It's about taking yourself out of the box that you live in and just focusing on one thing, and that's to train and lose weight." The first few days were far from easy. "It was horrible -- the heat and the training, the aches you get and the dramatic diet change," Henderson said. "I've gone from eating whatever I liked to grilled chicken, steamed vegetables and brown rice -- hungry for weeks," Henderson added.

But despite the gruelling regime, he never considered packing his bags and leaving early. 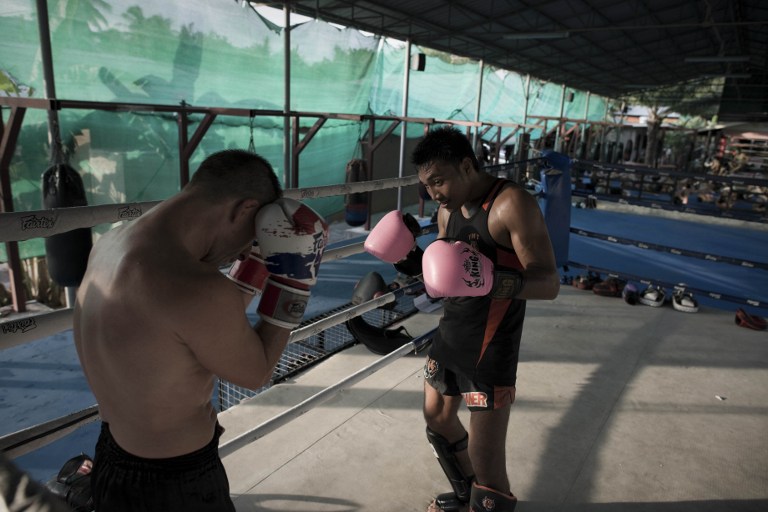 -- 'The Art of Eight Limbs' -- Thailand is home to a flourishing Muay Thai training industry welcoming thousands of guests every year, thanks in part to the popularity of mixed martial arts (MMA) which combines striking and grappling techniques. "Mixed martial arts is the fastest growing sport in the world and Muay Thai is an integral part of that," said Will Elliot, director of Tiger Muay Thai, one of more than a dozen such training camps in Phuket. "It's definitely extreme to travel halfway across the world," said Elliot, whose camp welcomes hundreds of guests each month paying up to about $100 per week for group training. "But we're in the tropics. It's hot. We're in Thailand, the birthplace of Muay Thai, so it's about immersion," he said. Muay Thai, Thailand's national sport, is known as the "Art of Eight Limbs" because it combines punches, kicks, elbows and knee strikes. Anyone thinking about signing up should be prepared for the challenge. "It's very physically intensive. At the end of a workout you're going to be exhausted. So if you can maintain that twice a day in combination with a diet, your fitness is going to increase rapidly," Elliot said. It worked for James Mason, 29, a former used car salesman from Britain who weighed 200 kilos when he arrived in Thailand a year and a half ago, but has since lost more than 100 kilos. 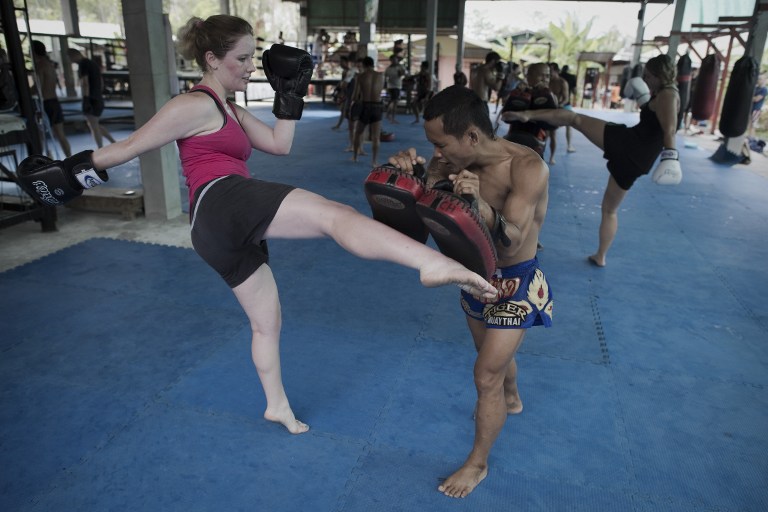 "The doctor told me that if I didn't do something drastic to change my life in five years' time I would be dead," he said. "When I first got here I couldn't walk 200 metres without my back hurting. I had to sit down and take a breath. I'd be dripping with sweat because of the heat and the humidity." Three months into his training in Thailand he caught a flesh-eating bacteria and required three operations, narrowly avoiding having his leg amputated. But he recovered and returned to his regime, and recently completed a 900-kilometre (560-mile) charity bike ride from Phuket to Bangkok. -- 'You're meant to duck!' -- At the Tiger camp, about 20 students from countries including Australia, Britain, Egypt and Russia sweated their way through a recent beginners' class under the close watch of muscular former Thai professionals. "One, two, duck, body punch," shouted one of the instructors as the students, of varying levels of fitness, practised their moves. After warm-up exercises involving jogging, stretching, star jumps and shadow boxing, the students paired up to spar, punching the air within a whisker of their opponents' ears. "You're meant to duck!" one girl reminded her friend after a near miss. The main goal of most of the trainees is not to become a boxing champion but to lose weight, said instructor Phirop Chuaikaitum, better known as Ajarn (Master) Dang. "They run for a long time, stretching, punching in the air for a long time -- that makes it easy to lose weight," he said. 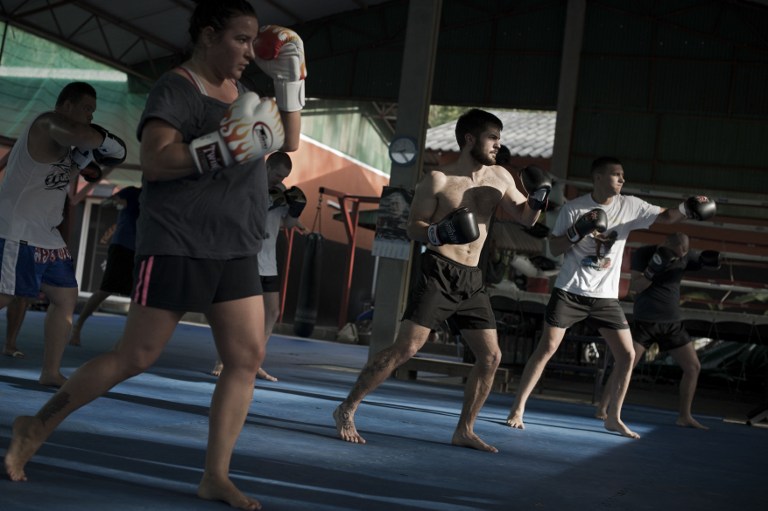 "But we don't make it hard because they will get hurt. We do it slowly but non-stop for two-and-a-half hours. They only have a three-minute break." There is no slacking off, even for royalty. "There was one guy who was a prince from Dubai," Phirop said. "He came for the beginner class. I hit him with a stick and he told me that he was from a royal family. Whether you're a construction worker or member of a royal family, when you come for boxing training you are all equal." As the session neared an end, sweat dripped from the students' foreheads and they grimaced with pain. And the knock-out blow -- 100 push-ups to finish, for those with the energy left. "It does hurt. You're sore everywhere. Sometimes it's tough to walk," Henderson said. "You're dripping in sweat but once you get back, have a shower, a swim in the pool -- you can't buy that feeling."

by Denial Rook from AFP