Swiss democracy in its purest form in Appenzell

Swiss democracy in its purest form in Appenzell

Steffan Millius grips his sword and makes his way through the throngs of people crowding into Appenzell's central square to take part in Switzerland's famous direct democracy in perhaps its purest form. Every year, voters from across the northeastern demi-canton, or region, of Appenzell Innerhoden flood into the Landsgemeindeplatz to elect their local leaders and judges -- not by casting ballots but by raising their hands. "I love it!" Millius shouts above the cheers of onlookers as a marching band and procession of politicians in traditional ceremonial garb make their way towards the roped-in area in the central square -- known as "the ring" -- where the voting will take place. "I think it's the best way to live democracy, because it's really direct," he says, straightening his sword, which he, like most of the other men, carries instead of a voting card. The tradition of the Landsgemeinde, or open-air assembly, dates back to the 14th century, and in Appenzell is held every year on the last Sunday in April. 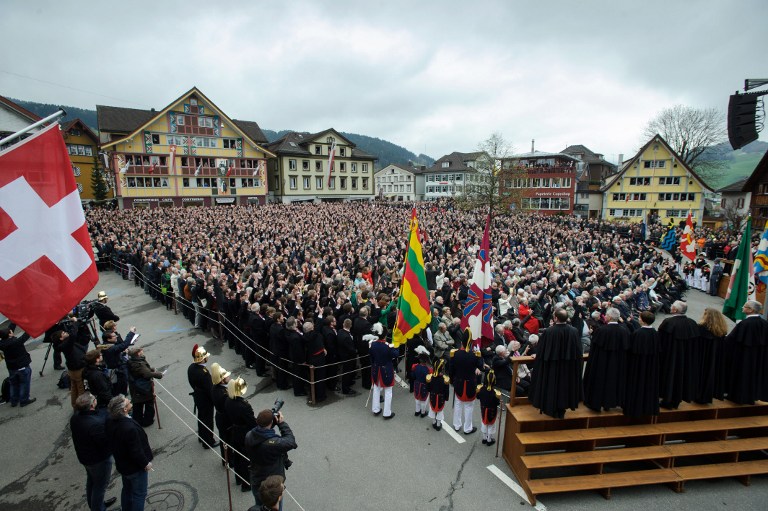 People gathering to vote during the annual Landsgemeinde meeting in the square of the town of Appenzell. ©AFP Historians say that back then, only men willing to go to battle to defend their community were allowed to vote -- a right they for centuries have demonstrated by carrying a side-arm into the voting ring. "This is the only place in the world, I think, where a weapon serves as voter ID," says Rudolf Keller, the second secretary in the Appenzell cantonal government, showing off his own sword, which has his name engraved in the glistening steel. Only Innerhoden Appenzell and another canton, Glarius, vote this way. The women flocking through Appenzell's narrow and windblown streets meanwhile carry their yellow voting cards with as much pride as the men carry their swords. Appenzell Innerhoden, considered Switzerland's most conservative canton, only allowed women to vote in 1991, a full 20 years after women were permitted to vote in Swiss federal elections. And women might still be standing on the outside if Bern had not found the situation so embarrassing that it made the almost unheard of move of ordering Appenzell men to let their mothers, wives and daughters into the ring. Vreni Inauen, a tourist guide who herself could not vote when she first became an Appenzell citizen 26 years ago, says times have changed a lot since then. "Some old men may still not be really happy that women were allowed in, but the younger generations are happy to have the women there," she says, stressing that even before 1991, women made their views known. "Many women went to watch the Landsgemeinde and made sure their husbands voted according to their opinions," she laughs. Now, as then, curious onlookers crowd every window in the colourful wood-painted buildings that surround the Landsgemeindeplatz, and restaurant terraces are overflowing with tourists braving the icy winds whipping the square to see democracy in action. -- 'Direct democracy in its loveliest form' -- Voting in Appenzell requires a large dose of patience. The more than 3,900 people crowded into the ring remain standing -- only the elderly and handicapped are provided with seats -- for more than three hours. Early in the process, an ocean of hands wave cantonal vice president Daniel Faessler in to replace outgoing chief Carlo Schmid, who leaves the government after 29 years. But filling Faessler's vacated seat proves more difficult: even after three attempts, it is impossible to see which of the two candidates has the most hands. 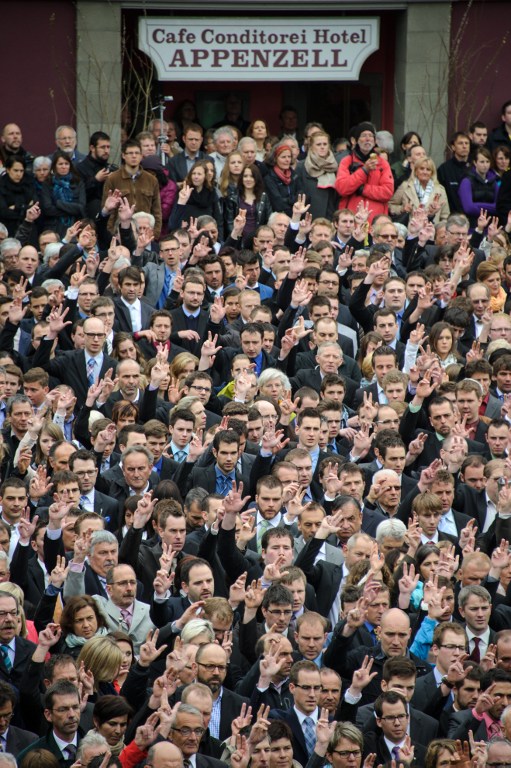 People raising their hands to vote during the annual Landsgemeinde meeting in the square of the town of Appenzell. ©AFP "This is a very special occasion," whispers a woman standing outside the circle: "They will count the votes!" -- something that hasn't happened for the past decade. For the count to happen, the crowd slowly splits into two currents and trickles out of the ring through two separate exits, each representing a candidate. Four counters at each exit click their buttons for each person who walks by. A rope marking the rear of the crowd gradually advances as the circle empties to ensure people re-entering the ring cannot exit, or vote, twice. In the end, Roland Inauen, who directs the cantonal court and the local museum, wins with just 33 more votes than his opponent Josef Schmid. The Landsgemeinde is not yet over though. Voters go on to re-elect the other government members and judges, give their blessing to a 7.0-million Swiss franc (5.7-million-euro, $7.5-million) rail project and reject a proposal to limit government member terms to 12 years. "This is direct democracy in its loveliest form," says Claude Chappuis, who has come from his home in the French-speaking Swiss town of Nyon near Geneva, to see "true democracy" in action. "It takes a lot of courage to raise your hand and say your opinion in front of everybody," he says. But some others are worried by the lack of secrecy. "It's a little dangerous to rhapsodise too much about the democratic nature of the Landsgemeinde," says Clive Church, a British historian and Switzerland expert, pointing out that "if you take an unpopular stand, you are exposed and can possibly be pressured". Voter Millius acknowledges that "there can be problems with every system". But, he says, "this is the purest system, and it's working for us". by Nina Larson from AFP