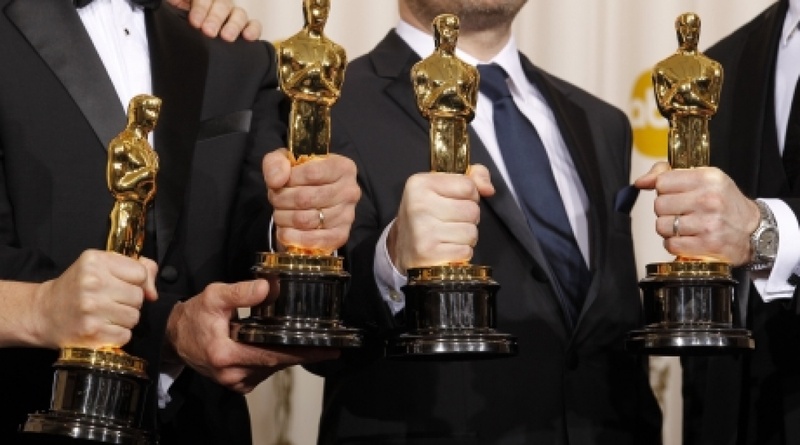 Oscar magic is brewing in a gritty Chicago factory where the statues soon to be hoisted in victory by the stars of the silver screen are born in a bubbling vat of britannia.

The pewter-like alloy is poured slowly into a mold and cools quickly. But it takes 40 hours of precise and delicate work before Oscar is ready for the bright lights of Hollywood. 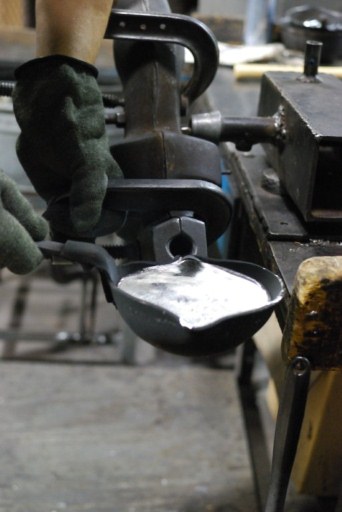 Molten britannia is poured into a mold for an Oscar statuette at the R.S. Owens factory in Chicago. ©AFP

The heart of the trophy -- with its iconic square jaw, broad chest and sword -- is swiftly hammered out in preparation for careful polishing.

Once every blemish is erased and Oscar shines like a mirror, the statue is hand-dipped in electrically-charged tubs of molten copper, nickel, silver and 24-carat gold.

Then it's on to more polishing and a blinding lacquer before Oscar is finally screwed into his heavy base and carefully boxed using white gloves.

Hand-casting is a dying art, but one the Academy is willing to pay dearly for as it jealously guards the reputation of one of the most sought-after and recognized trophies in the world. 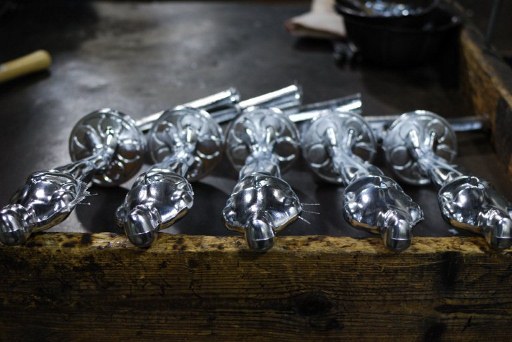 The perils of seeking cheaper alternatives were on display at the Golden Globes last year when Robert De Niro showed up empty-handed in the press room after receiving a lifetime achievement award.

"The top fell off," he told reporters. "They'll have to solder it back on."

R.S. Owens -- which has been making Oscar since 1982 -- is the last trophy manufacturer left in the United States.

Most of the cheap trophies handed out at kids' sports tournaments are now made in China.

R.S. Owens has fought to hang on by focusing on "prestige" awards -- like the Oscars, the Emmys, MTV Music Awards, and the London International Advertising Award -- and the corporate market. 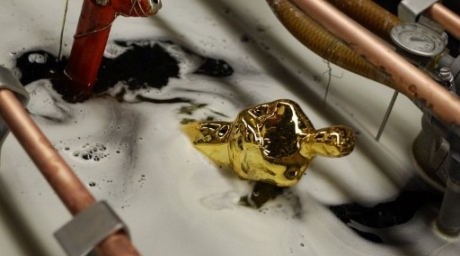 An Oscar statuette is dipped in an electrically charged tub as it is plated with gold at the R.S. Owens factory. ©AFP

Its display cases are filled with familiar figures like the Jolly Green Giant, the Planter's Peanut, the Pillsbury Doughboy, Tony the Tiger and a crystal, sunglass-wearing Starkist Tuna.

But it had to lay off around a third of its staff after the 2008 economic crisis took a huge bite out of the "employee recognition" market as it was already struggling to stem a slow, but steady loss of its "prestige" client base.

"In the past, many of the prestigious awards (contracts) that we lost didn't care that they were made in China," said Scott Siegel, whose father founded R.S. Owens in 1938.

"They only cared about price, especially when the recession hit, that became even more important. I'm starting to see signs of that turning around. People are more interested in protecting jobs in the United States." 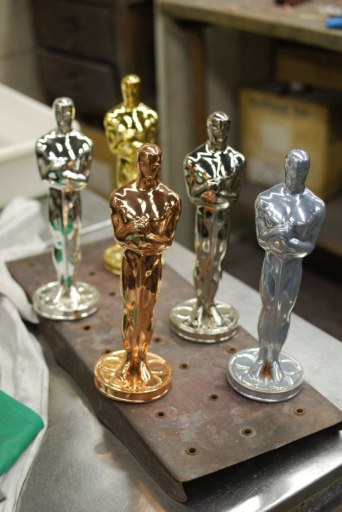 Some clients are coming back because of quality concerns -- especially after the R.S. Owens tested a competitor's award that was handed out to children and found it was made of lead with no protective coating.

Others are coming back for ease of service, Siegel said. Shipments arrive sooner, as do repairs.

Siegel takes particular pride in how his company responded when a shipment of 55 Oscars was stolen just weeks before the awards ceremony.

They worked day and night and managed to make replacements in just 10 days -- a process that usually takes about six weeks.

The stolen statues were found in a dumpster just days before the ceremony, but the Academy held on to the extras -- and a handful more -- to make sure it never gets caught empty-handed again.

Nominations for the 84th Academy Awards will be announced Tuesday at 1330 GMT. The awards ceremony will be broadcast worldwide on February 26.

By Mira Oberman from AFP