Her body begins shaking as she mumbles an ancient shaman mantra to the beat of a double-sided drum, coaxing snake spirits out of a young Nepali man who has "lost his soul".

Iron bells around Parvati Rai's white shirt ring as she jumps and writhes in a trance, her head-dress of peacock feathers waving wildly as she flings her arms over her patient.

In the background, awestruck Westerners watch the animistic ceremony performed not high in a mountain pass, but in a comfortable modern property in suburban Kathmandu.

"The boy has lost his soul and we are helping him find it," says Mohan Rai, founder of the Shamanistic Studies and Research Centre Nepal, as he helps the ethnic Kirati healer complete the age-old ritual. 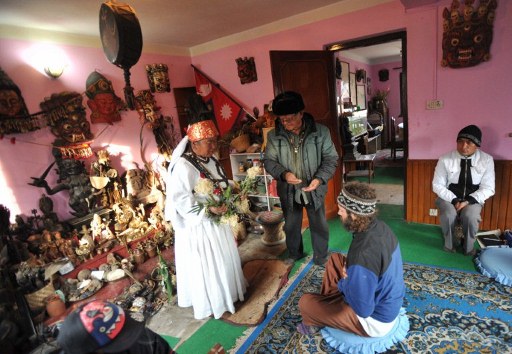 After decades of modernisation when witch doctors were almost wiped out, "urban shamans" are enjoying a renaissance among Nepal's metropolitan middle class and Westerners looking to be healed, cleansed or spiritually awakened.

Mohan Rai, 80, has been on the frontline of the revival since setting up his centre in 1988 to breathe new life into a practice he says has been "left behind" by science, technology and the big world religions.

"Shamanism is 75,000 years old. But it is dying out in the villages and I want to keep these traditions alive," said Rai, who is critical of the mainstream religions and governments he believes have plotted to kill off shaman practices.

"I have thousands of students a year and, more and more, they are Westerners looking for something else where Western medicine has failed. Some of my students are also medical doctors looking to integrate shamanism into their own work."

Shamans, known in Nepal as dhami-jhankris, claim to find the lost souls of the sick by travelling between three worlds connected by an upside down tree called Kalpa Vriksha, the "tree of immortality". 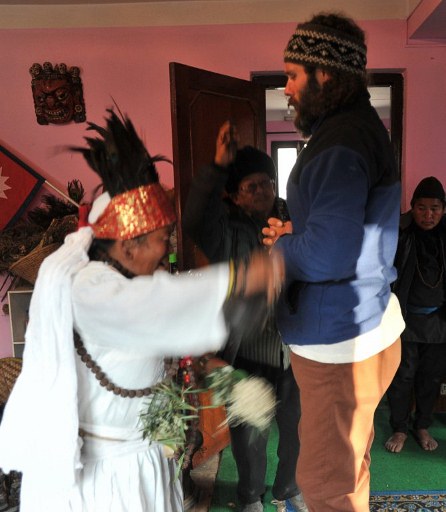 They say they commune with the deities and spirits -- both benign and malignant -- inhabiting each world.

Tobias Weber, 33, a German farmer travelling in Nepal, said he was drawn to shamanism after becoming interested in healing but disillusioned with Western medicine.

"Shamanism can complement what doctors and nurses in the West are able to do," he told AFP.

"If you have broken your arm you go to a hospital but there is also so much you can get from the spiritual side of healing which people never experience."

Rai, who is married to two sisters and speaks English, German, Spanish, French, Sherpa, Tibetan and Hindi, has enjoyed a colourful life.

Born into a Bhutanese farming community, he grew up helping his father, "a powerful and well-known shaman" with healing rituals for the sick in his village.

After a stint in the British army as part of Nepal's legendary Gurkhas and time as a trekking guide and mountain rescuer, he was led back to shamanism via working with foreign anthropologists locating witch doctors among the country's indigenous tribes.

He realised the healing art was of great interest to the developed world and set up his research centre to spread the message, employing shamans from Himalayan mountain communities.

In his centre sits a photograph of a six-year-old German boy whom Rai says he healed after the youngster, riddled with cancer, was given just two years to live.

He also relates the story of a paralysed man he helped to walk within just a few healing sessions.

Australian Laura Martino is taking a course at Rai's centre and wants to help people in her home town of Melbourne reconnect with their spiritual side.

"I came here with a totally open mind, which I had to because of some of the amazing experiences I've had here, like trips to the mountains and sleeping in graveyards," she said. 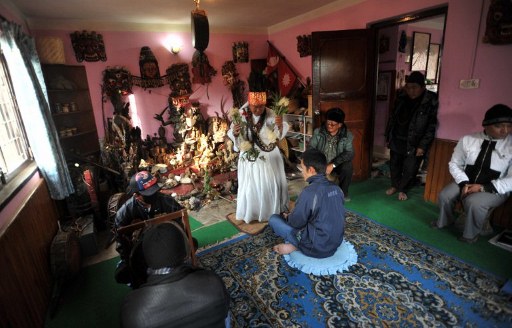 "I think the Western world has lost something in its approach to healing and we really need to get in touch again with nature."

Shamanism has had its critics, however, in a country where ancient superstitions can have a devastating effect.

Last week villagers in southern Nepal beat a neighbour and burned her alive because their shaman had told them she was a witch.

The crime caused widespread revulsion, with Prime Minister Baburam Bhattarai appealing to Nepalis not to listen to the accusations of shamans.

"In villages especially, faith healers are from the local community while western medicine practitioners are from cities and towns and are often regarded as outsiders," said Ravi Shankar, a professor at the Manipal College of Medical Sciences in Pokhara, Nepal's second city.

Many academics in the West believe that shamans rely on the "placebo effect" -- the tendency of any treatment, even an ineffective one, to cause improvements in health simply because the recipient believes it will work.

Even doctors who distrust Nepal's shamans have in the past relied on their services, training them to use rehydration salts to treat diarrhoea and administer antibiotics in pneumonia cases.

"There is the negative aspect where diseases like epilepsy and mental illness are regarded as entirely due to supernatural causes and modern medical treatment is neglected," said Shankar.

"But then this was the case in the West also about 150 years ago."

By Frankie Taggart from AFP