In a poor but fertile corner of southern Morocco, illiterate Berber women are tapping the surge in global demand for argan oil, a "miracle" product they grind from a special nut, that is helping to lift them out of poverty.

Sometimes known as "liquid gold" or "miracle oil" for its rich cosmetic, culinary and medicinal properties, the exclusively Moroccan export has caused a sensation in the West, where it is touted as a unique hair care and anti-ageing skin potion.
The rolling countryside between Essaouira and Agadir, resort towns better known for their Atlantic surf, is covered with argan trees, and distinguished by the bizarre sight of goats perched in their branches munching away on the pulp of the nut.
Another striking feature of the landscape is the profusion of cooperatives that employ Berber women to produce the oil, from the tree to the bottle, and sell it as far afield as Canada and Japan, sharing the profits.
Indigenous, non-Arab Berber people make up a large portion of the local population.
Zahra Knabo, who runs the Ajddigue cooperative, one of the very first, says there are now 137 of them, and hails the "evolution" they have brought to the region's Berber women who suffer from widespread illiteracy, poor health care and stifling social mores. 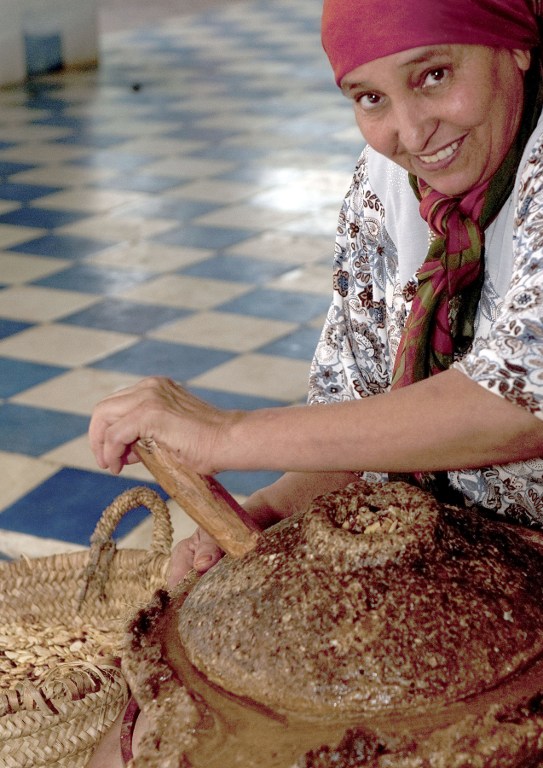 A woman grinds nuts from the Argan tree to extract the kernel. ©AFP
"In this rural area, women would traditionally herd the animals and gather wood from the forest. They were the first to wake up and the last to go to bed," says Knabo.
"Now most of the women working in the cooperative have money in their pockets. Some have completely financed their houses. They've been able to get electricity, televisions and fridges," she says.
When it opened in 1996, Ajddigue had 16 employees and produced 200 litres (52 gallons) of oil monthly.
But around 60 women now work there, Knabo says, and monthly production has risen to 1,000 litres, with an annual turnover last year of four million dirhams (360,000 euros, $460,000).
Reflecting argan oil's growing popularity in the cosmetics industry, the group's two biggest clients are French and Italian, while the nearby Kaouki cooperative says its main customer, a British firm, started buying the oil in 2009. 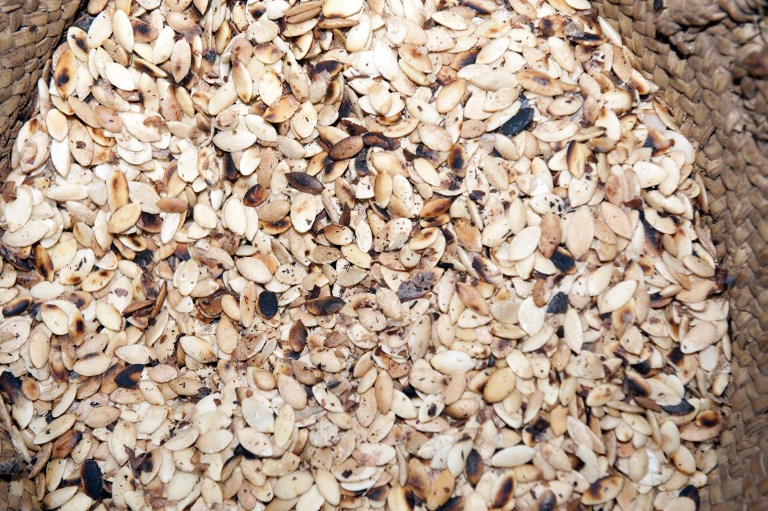 The kernels of the Argan tree. ©AFP
Scientific proof of the oil's unique healing properties is elusive, but leading aromatherapists argue that, with its richness in fatty acids, antioxidants and vitamin E, it is a highly effective treatment for damaged skin and dry hair.
The economic crisis has taken its toll on demand this year, with both cooperatives seeing their big European clients cutting by half their orders of the luxury commodity, which sells for between 250 and 400 dirhams a litre.
Competition from the growing number of producers has, meanwhile, left smaller associations like the Tawount cooperative, which opened in July and employs 15 Berber women, struggling to sell their products.
-- Reaping the rewards --
Colourfully dressed women sit on the Tawount shop floor, cracking open the nuts and sorting them into baskets, with stone grinding tools used to crush the kernel and extract the oil, as they lack the machines that others use to do so.
Argan products range from cooking and cosmetic oil, to hand cream, honey and "amlou" -- a sweet, nutty paste made with almonds -- while the pulp is used as nutritious animal feed, and the shells burned as fuel for cooking.
Karima, a 28-year-old assistant at Tawount, remains optimistic that business will pick up. But she is adamant about the cooperatives benefiting the marginalised women of the area, who she says were often unable to reap the rewards of their labours.
"Before, they worked at home roasting and crushing the nuts and giving the oil to their husbands to sell. Now, by working together, they are able to earn money for themselves, to support their children and their families."
Another threat to the Berber groups' success is now making itself felt, according to Ajddigue's Knabo and others familiar with the market, from companies "disguised" as cooperatives looking to cash in on the trend.
In the heart of Essaouira's medina, Khadija, 21, runs a small shop selling bottles of the golden liquid on behalf of five women producer groups, one of many argan oil outlets in the historic port city targeting the tourist trade. 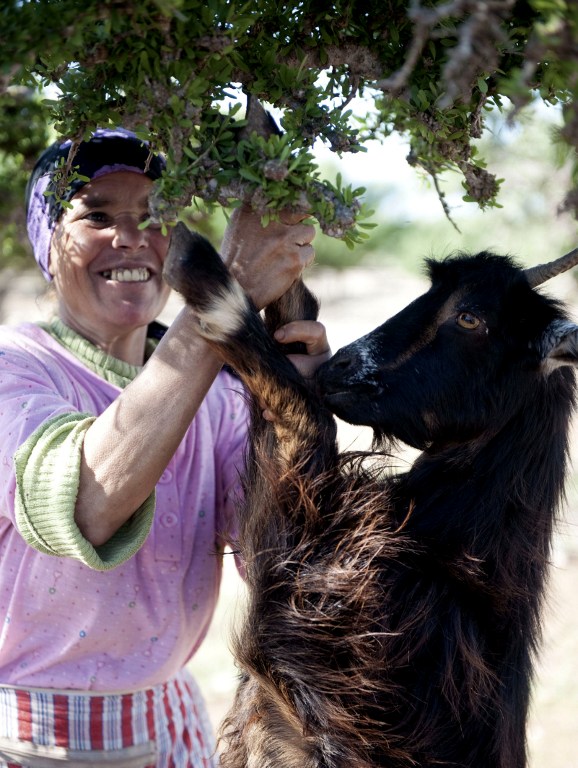 A goat jumps up as a woman collects the nuts of the Argan tree. ©AFP
"Unfortunately, a lot of false cooperatives have been set up recently, working with businesses in Casablanca. They lie about their activities" to get the official certificate of approval, she charges.
"We need the state to stop giving certificates to these false cooperatives. There are dozens of them in the region of Essaouira, and they are undercutting our business."
But the argan oil boom is in its relative infancy and hopes remain high.
Its positive impact on the environment has also been hailed as a success story, spurring conservation work to reverse the over-exploitation of the endemic tree, now found only in southern Morocco and parts of Algeria.
The cooperatives have carried out reforestation projects backed by the government, and millions of euros in EU support, that also encourage the Berber women to appreciate the importance of the tree for future generations.
UNESCO, which designated 10,000 square miles (26,000 square kilometres) of the argan region a "biosphere reserve" in 1998, has highlighted the tree's function as a buffer against desertification, as well as its rich yields for the local community.
by Simon Martelli from AFP