Rays of the winter sun bounce off gleaming mirrors on the tiny lake of Colignola in Italy, where engineers have built a cost-effective prototype for floating, rotating solar panels.

"You are standing on a photovoltaic floating plant which tracks the sun, it's the first platform of its kind in the world!" said Marco Rosa-Clot, a professor at Florence University, proudly showing off his new project.

Rosa-Clot and his team say they are revolutionising solar power and that their floating flower-petal-like panels soaking up the Tuscan sun have already attracted a lot of interest from international buyers. 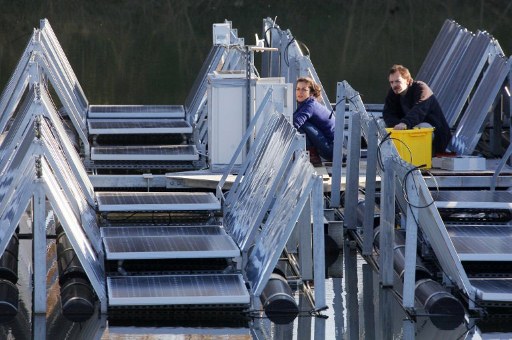 Standard solar panels on buildings or in fields have been criticised for taking up valuable agricultural land, being unsightly and losing energy through overheating -- issues the floating plants would resolve.

While the water keeps the panels at low temperatures, reflectors are positioned to maximise solar capture at different times of day, making it more efficient than a traditional installation, Rosa-Clot said.

The head of Scintec, a small family business which produces a variety of renewable energy and industrial devices, Rosa-Clot said the pilot plant set up on the lake near Pisa, Tuscany, was a model of efficiency.

"It's a small-scale design, 30 kilowatts, which would suffice for a dozen or so families. The standard is set at 3kW per apartment," he said.

The flat panels are winged by reflectors and sit on raft-like structures which are anchored to the lake bed with a pylon. 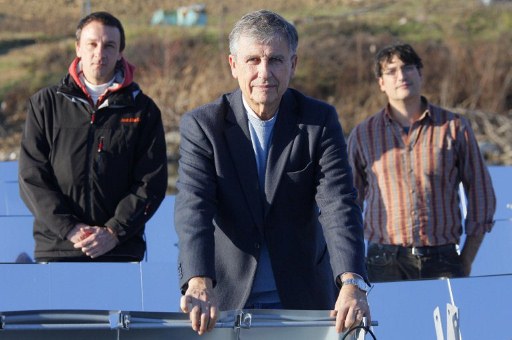 Head of ScienzaIndustriaTecnologia engineer Marco Rosa-Clot (C). ©AFP
Decked out in jeans and jacket, the engineer explained the benefit that a place like sun-kissed Sicily with its 75 square kilometres (29 square miles) of artificial reservoirs and lakes could draw from the system.

"If we covered just 10 percent of that area with floating photovoltaic panels, we would have one gigawatt of power installed," he said -- enough to power 10 million 100-watt light bulbs.

Engineer Raniero Cazzaniga, who works on the project, said that some people think classic solar installations are spoiling the landscape.

"Our system is designed for low-lying quarries. The installation is only about a metre (three feet) high and usually you can't see it until you get to the water's edge. It is not at all intrusive," he said.

Rosa-Clot said: "Reactions from abroad have been very positive. Some Koreans came to Pisa to see us and we signed a three-year contract giving them a license to build this sort of installation in South Korea." 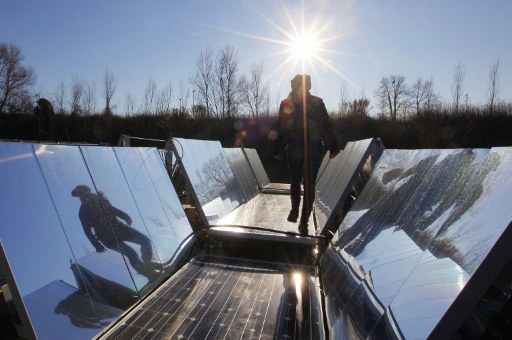 The Korean company Techwin has built a floating photovoltaic plant using the FTCC technology, and in Italy the Terra Moretti group has installed one on an irrigation reservoir at its winery near Livorno.

Rosa-Clot and his team are in talks with "Germans, French and Italian companies" hoping to stay ahead of the curve on water-based solar energy.

"There is no miraculous solution to the energy problem," he said. "Our project will make it possible to have a far greater number of photovoltaic installations at an ever lower cost."

by Sonia Logre from AFP