It gives no degrees and the teachers and pupils often do not share a common language, but India's Barefoot College has been transforming the lives of rural women for four decades.

Located in Tilonia village, 100 kilometres (60 miles) from the capital of the western desert state of Rajasthan, Barefoot is a collection of environmentally friendly dome-shape buildings.

Inside, about a dozen teachers give classes in subjects ranging from the basics of solar engineering, dentistry, mechanics or public health, to radio DJing. 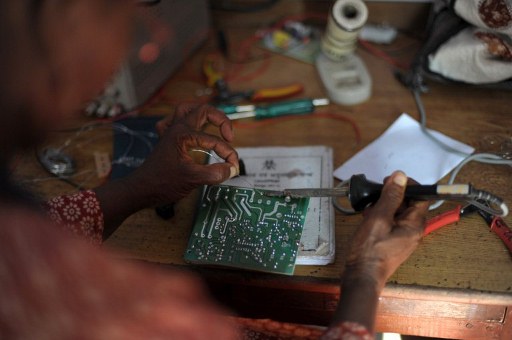 A woman working on some soldering during a workshop to learn how to integrate circuit boards. ©AFP

All the pupils sitting on the floor or leaning on old desks are women, some of them illiterate grandmothers from remote villages. Almost everyone is poor, many are unable to read or write, and some come from as far away as Tanzania.

Barefoot was started by social entrepreneur Sanjit "Bunker" Roy in 1972 and has been breaking taboos ever since, educating women who are often second-class citizens discouraged from getting an education.

Magan Kanwar, who teaches solar engineering, remembers being told by her father-in-law she should focus on knitting sweaters rather than dreaming of attending the school.

"But I just wanted to do something more than cooking and producing babies. This college gave me a chance to find the purpose of my life," she told AFP.

Lots of the women at the school have heavy-drinking and abusive husbands, she says, meaning their studies give them some independence and crucially can secure an income and a future for their children. 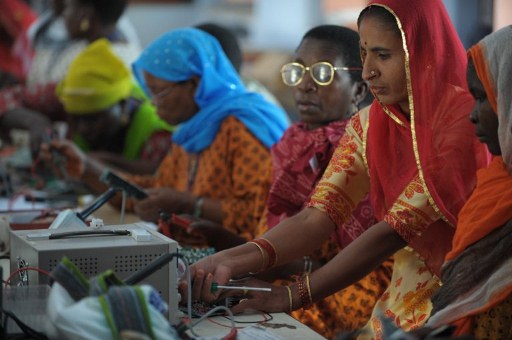 "If there's no food for their kids at least the women can work and look after them, educate them, run the household," she explained.

One of her pupils, 47-year-old Masamba Hameez Makami from Tanzania, will return home to install solar-powered lanterns in her village, which has no electricity, giving her neighbours lights at night for the first time.

Her stay at Barefoot is funded by the Indian government, which provided 28 scholarships last year for women from Africa to do the six-month solar engineering training programme.

"Very soon I will be able to electrify my whole village," says the mother of seven from Zanzibar.

To overcome the language barrier, Kanwar uses sign language and colour-coded circuits to explain the solar process to Makami, who speaks Swahili, an east African language.

"We women have our own code words," Kanwar says wryly as she solders electric wires to a circuit board.

Barefoot's founder Roy, named as one of Time magazine's 100 most influential people in 2010, believes that the key to improving living conditions in poor areas is empowering rural women -- the theme of this year's International Women's Day on Thursday.

Training older women rather than focusing on men is the key, he said.

"Men are very restless, compulsively mobile. The moment you give them a certificate they leave their villages," Bhagwat Nandan, a senior coordinator at the college, told AFP.

"We deliberately confer no degrees," he explained. "People are obsessed with the idea of getting degrees, certificates and recognition but we recognise the hands-on, learning-by-doing process."

The model has been copied in 17 states across India and emulated in 15 countries in Africa and several more in Asia and South America.

Courses typically last between six to nine months and are free for students, thanks to funding from a range of donors including the Indian government, international agencies, and private and corporate foundations.

An estimated 10,000 women students have passed through the college's doors, while alumni are running more than 800 night schools across India providing a multiplier effect as knowledge gets passed on by word of mouth. 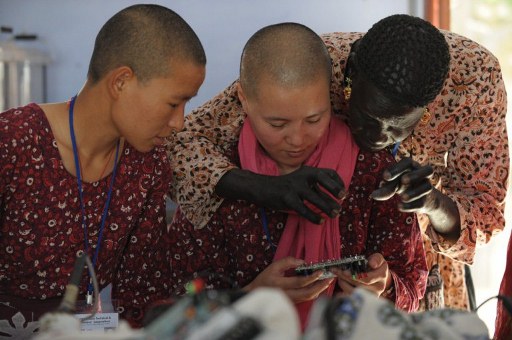 Nyayen Chol of South Sudan (R) instructs how to integrate circuit boards for solar lights at the Barefoot College. ©AFP

The establishment is a model of grass-roots cooperation and frugality.

No one working there earns more than $150 a month but everyone receives a living wage. Living conditions are simple, with many classes taken on the floor.

The institution, powered entirely by solar energy, also makes sure nothing is wasted.

"We keep getting these reports that no one reads, so we decided to put them to some use," Gopal said. "We use the World Bank paper to fight poverty and social problems in our own style."

by Rupam Jain Nair from AFP