In Iceland, hunters and watchers battle over whales

In Iceland, hunters and watchers battle over whales

A slick black head breaks the surface, drawing delighted shrieks from whale watchers in a growing, and lucrative, activity that some say should replace Iceland's controversial whale hunt.

Since their meagre beginning in the 1990s, whale safaris in this island state have grown to attract tens of thousands of visitors each summer. But its proponents tensed up when Iceland reintroduced commercial whaling in 2006, and the two sides remain uneasy bedfellows.

"Whaling is bad for our business," lamented Hoerdur Sigurbjarnarson, 58, of the family-run North Sailing tour company based in the tiny northern fishing village of Husavik.

"And it's useless," he exclaimed, hunched over a long wooden table in the galley of one of six large oak boats his company uses for whale-watching tours.

He insists "there's no market for whale meat," a stance that Iceland's Whale Commissioner heartily disputes.

Watching and hunting whales "work perfectly together" in a look-and-cook combo of tourism and gastronomy, Thomas Heider said last week on the sidelines of the International Whaling Commission (IWC) forum on the British Channel Island of Jersey. He said many tourists "go to restaurants afterwards to taste the whale meat".

But Arni Gunnarsson, the chairman of the Icelandic Travel Industry Association, feels like Sigurbjarnarson that whaling only stigmatises the country and contributes little to its crisis-hit economy.

Iceland and Norway are the only two countries in the world that authorise commercial whaling, under a much criticised exemption within IWC rules. Japan officially hunts whales for "scientific purposes", though the whale meat is sold for consumption. 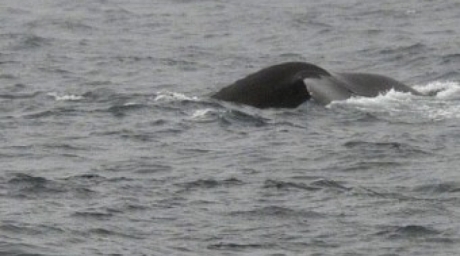 The tail of a whale appears off the coast of the tiny northern fishing village of Husavik, Iceland. ©AFP

"It's simple: you get more revenues out of watching the whales than out of hunting them," said Gunnarsson, stressing that with no international market, the hunts bring in little to no foreign revenue.

Icelandic whalers insist their financials are sound, but admit they are serving a tiny market comprising only a fraction of the country's 320,000 inhabitants as well as some customers in Japan.

And this sole export market collapsed after Japan was struck by multiple disasters in March.

"Demand has really shrunk (but) it will pick up," said Kristjan Loftsson, the 68-year-old head of Iceland's largest whale-hunting company, Hvalur.

-- Foreigners flock to see the whales --

Sigurbjarnarson, meanwhile, says whale-watching is booming. And foreigners account for more than 90 percent of the 30,000 clients his company takes out each year from April to October, when whales migrate to Icelandic waters.

Typical was a recent day when 20 tourists, including nationals from Austria, France, Germany, Italy and the Netherlands, braved freezing rain, towering waves and bad visibility to board one of North Sailing's five daily rides into the whale-rich Skjalfandi Bay. 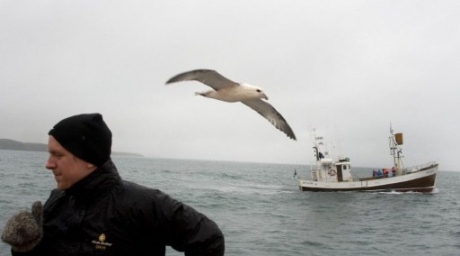 A tourist stands on the deck of a whale-watching boat off the coast of the tiny northern fishing village of Husavik, Iceland. ©AFP

All shouted with joy when a slick humpback suddenly showed its head then dove back in, slamming its massive tail on the stormy surface. It was followed by two more humpbacks and a school of dolphins during the three-hour tour.

"It was worth it, I think," said green-faced French national Katia Groh, 29, despite a bout of sea sickness on the lurching vessel.

An advantage in Iceland is the success rate, according to Sigurbjarnarson who says 98 percent of his own tours actually sight whales. And that, he contends, is largely because there is no whale hunting in Skjalfandi Bay.

Hunter Loftsson, like the government, insists that North Atlantic whale populations are abundant and rejects anti-whaling arguments that whalers are depleting what environmentalists say is a dwindling resource.

Estimates, Loftsson said, show Icelandic waters in the summer hold around 20,000 fin whales and some 40,000 minke whales. "So if we take 150 a year, that's nothing," he said, referring to Iceland's annual quota for fin whales.

Sigurbjarnarson, however, says such estimates are "highly questionable". "Whales migrate. They are hard to count and they shouldn't be hunted," he said.

A few whale watching companies straddle the issue, taking tourists -- as Heider told the IWC forum -- to see whales then taste them back at port.

The anti-whaling International Fund For Animal Welfare (IFAW) insists that such tastings account for a large portion of Iceland's domestic whale market, saying 40 percent of tourists try whale thinking it's a traditional Icelandic dish whereas only five percent of Icelanders regularly eat whale.

Their slogan "Meet Us Don't Eat Us" was briefly displayed at Iceland's Keflavik international airport before, according to the IFAW, the powerful whaler lobby -- who defend hunting as part of national heritage -- pressured for its removal last month.

"We want the tourists to realise they can be part of the problem or the solution," said IFAW's Sigursteinn Masson.

By Nina Larson from AFP