They shake, rattle and roll alongside flashy cars on streets lined with skyscrapers, but Hong Kong's retro-look trams are as much part of life in the glitzy city as they were a century ago.

Known as "ding-dings" for the sound of their bells, the iconic double-decker trams are beloved of tourists and are being celebrated in a city exhibition -- but for thousands of commuters and shoppers they remain daily workhorses.

Office worker Eric Lee says they have a special place in his heart and he often chooses a tram over the quicker and more comfortable public-transit options in the modern metropolis, including a super-efficient subway system.

The "ding ding" sound stopped Lee from crying when he was a child -- much to his mother's delight -- and later set him on a path to becoming a collector of tram memorabilia, some of which are on show at the exhibition. 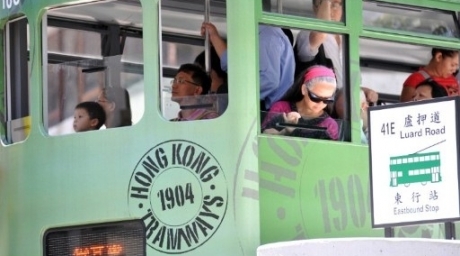 A woman looks out the window while traveling by tram in Hong Kong. ©AFP

"When I was young, I was always crying," the 26-year-old office worker told AFP as he settled into a seat on a trolley's upper deck, giving him clear views of Hong Kong's teeming urban landscape.

"My mom brought me to the tram stop. When I heard the ding-ding sounds from trams, I stopped crying. I can't explain why. But it's such a good memory."

Lee has designed a tram-shaped wrist rest for computer keyboards, published a tram photobook and turned a tramcar into a coffee shop as part of the exhibition of some 300 items displayed at Victoria Peak, a tourist attraction overlooking the city and harbour.

Not all Hong Kong residents are quite so taken by the former British colony's 107-year-old system, the largest of its kind still in operation, which has survived despite heavy competition from cars, buses and subways.

But at HK$2.30 (29 US cents) for a ride anywhere on the 118-stop system, which traces much of Hong Kong's old shoreline along a 30 kilometre (18-mile) track, it remains popular while trams have disappeared from most major cities.

Apart from the price, a whiff of nostalgia blowing through the open windows in the sealed and air conditioned city also draws passengers to the teeth-chattering and often crowded rides on one of the 163 trams.

"It has become a part of Hong Kong, and it's our heritage," said local lawmaker Pan Pey Chyou.

"I just couldn't imagine what Hong Kong island would look like without the trams being there."

British tourist Rupert Shield, 38, figured the system was "definitely worth two dollars and thirty (cents)", despite the lack of air conditioning.

"A bit hot, a bit crowded, but you know you get a good view from up top," he said. 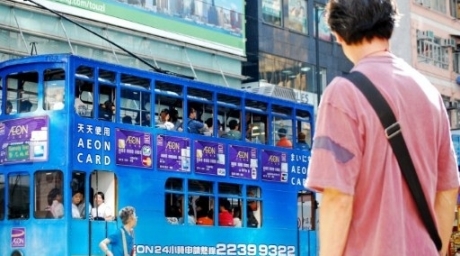 "I'm surprised many people still use it other than tourists," he added.

In many European and North American cities, tram systems had disappeared by the mid-20th Century as critics dismissed them as too rigid and vulnerable to delays caused by a single accident.

But now some large urban centres, including Paris and Auckland, are taking another look, as they restore, upgrade or even expand their electric-powered streetcar system, citing its environmental and cultural heritage value.

French utility giant Veolia, which took over management of Hong Kong's tram service in 2009 and bought the system outright in 2010, is upgrading the city's system with more comfortable seating, while keeping the cars' heritage facade.

"No one can say forever. But personally, I think that (the tram system) will stay here for a very, very long time," said legislator Pan.

"I think for the next century, probably it will still be there."

By Kwanwoo Jun from AFP