Daniel Minkoh flashes a smile as he stands alongside his wife and three kids, proud of his middle-class status in the equatorial west African state of Gabon.

"Of course I consider myself middle class," the 33-year-old transport logistics worker says at his home in the capital Libreville. "I earn a civil servant's salary, and I became a homeowner 10 years ago."

With monthly wages of about 900 euros ($1,165), Minkoh typifies the emerging middle class in this oil-producing nation that is often associated with massive income inequality.

Even though Gabon is sub-Saharan Africa's fourth-largest oil producer, 33 percent of the country's 1.4 million people live below the poverty level, according to the United Nations Development Programme, based on the latest available figures from 2005.

Minkoh's Libreville home is a far cry from the cliches of grinding African poverty, boasting a satellite dish, a flat-screen TV and a laptop. On the outskirts of town, dirt roads are being paved and new houses are under construction.

"We've especially felt it over the last two years," says general contractor Eric Ngabouna, 40, who is currently busy at about 15 construction sites.

Like Minkoh, Ngabouna also considers himself middle class and he too owns his home. His salary fluctuates but he has earned as much as 1,500 euros a month.

A recent report by the African Development Bank defines the middle class as anyone living on two to 20 dollars a day, which is not a huge amount in Libreville, considering that it is the world's seventh most expensive city. 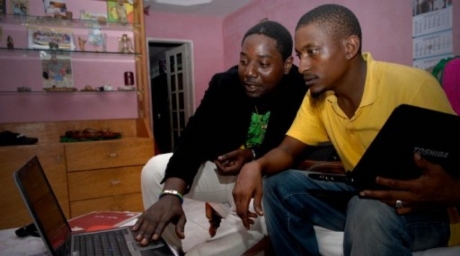 Daniel Minkoh (R) and his buisness partener work on a project. ©AFP

Even on his relatively good salary, Minkoh says it can be hard to make ends meet. To boost his income, he has gone into business with a friend and sells bracelets decorated with Gabon's national colours: green, yellow and blue.

He became a homeowner thanks to Gabon's former long-serving president Omar Bongo Ondimba -- one of only two presidents since the country gained independence from France in 1960 -- who gifted the house to him during his 2005 presidential campaign. Bongo, who died in 2009, was well known for such "gifts" to citizens as a way of countering criticism that he was mismanaging the nation's oil wealth.

Gabonese sociologist Anacle Bissielo said that although the former French colony has an emerging middle class, it would be an oversimplification to assume things are functioning well in the country or across Africa as a whole.

Signs of poverty still abound, as do trophies of a better-off elite such as expensive four-wheel drive vehicles and high-end phones.

Gabonese officials keep few figures about the nation's middle class, and the last census was in 1993. The country is seen as one of the more stable and prosperous on the continent, thanks to a small population, many natural resources, considerable foreign support and a developing tourism industry. Much of the middle class comes from the nation's 70,000 or so civil servants, about 25 percent of whom earn upwards of 500 euros ($645) a month.

Bissielo said that to live more comfortably, many of these civil servants rely on "informal strategies".

"The most frequent way to compensate income is by corruption," he said. "The civil servant will make people come back two, three, even four times to make it clear, without saying openly, that 1,000 (CFA) francs (1.50 euros) might get you what you need."

This, Bissielo said, is the "informal strategy" to boost income when above-board attempts to negotiate better salaries have failed.

Compensatory perks also come with some jobs to keep workers happy but belie their actual economic status, said the sociologist, pointing to fancy office cars that can be seen parked each night in working-class districts of the capital that still lack reliable running water or electricity.

Ngabouna, the contractor, says the middle class wants to be less reliant on the state, but the private sector mainly generates poorly paid and unskilled positions.

Oil sales generate some 60 percent of state revenues, and with oil production dropping dramatically, it remains to be seen what the future has in store for Gabon's emerging middle class.