Despite fierce storms, a deadly bomb attack and growing competition from electronic media, a Christian charity still sails the seas on a mission to offer cheap books while promoting family values.

The Logos Hope, which docked in Manila Bay last month, is the latest in a fleet of converted ferries that have been selling books in harbours of mostly poor nations for the past four decades.

"What we hope happens is that people get excited with reading," ship captain Pat Tracy told AFP during a tour of the 132-metre-long (433-foot) vessel that inside resembles a bookshop in an upscale mall.

"We want to encourage people to get into reading but we want to make the books available to all people, not just people with a lot of money."

The ship carries at least half a million books, with stocks being constantly replenished during port calls, according to Tracy.

It is run by GBA Ships, a German-based Protestant charity, that relies on a volunteer crew of 400 people and donations to meet running costs drawn from a global church network. 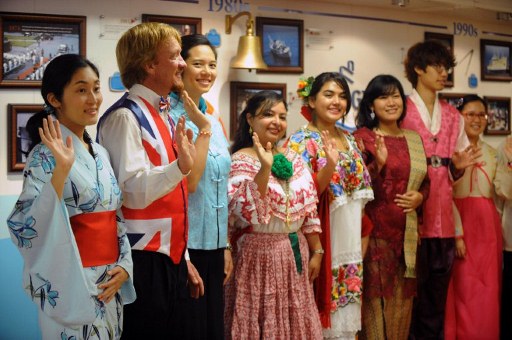 In the air-conditioned aisles of the floating shop, children's books featuring popular characters such as Bob the Builder share space with the works of Shakespeare and Dickens.

Another section is devoted to technical books on engineering and biology, which Tracy said were particularly popular in poor communities.

"Everything can be found in our books, from brain surgery to bridge construction," he said.

There is also a large selection of books on nurturing family life and developing leadership skills, as well as other lifestyle genres including education, health, handicrafts, home repair and cooking.

Many of the books dealing with personal development and relationships have a distinct Christian slant and even the fiction titles are largely wholesome and uplifting.

The magic-themed "Harry Potter" books and the vampire-romance series, "Twilight", are absent. Instead, there are the Christian-inspired "Narnia" series as well as "Hardy Boys" and "Nancy Drew" titles.

"The books we sell have to fit our values and framework," said Logos Hope managing director Gian Walser. 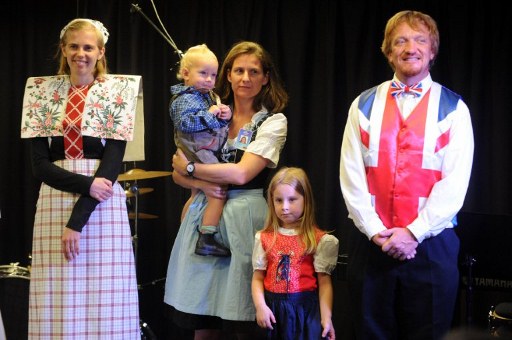 Tracy and other crew members said the sales of the books were just enough to fund the shop itself, while the other costs of running the ship required support from the global church network.

All of the crew members, most of whom are aged in their 20s, are volunteers who sign up to work for two years for free. Usually, a local church also sponsor a volunteer's trip to help defray the vessel's costs.

Although bookstores on land have run into tough competition from online sellers in recent years, Logos Hope staff said the ship continued to enjoy strong demand.

Logos Hope has sold over three million books to roughly 2.5 million visitors from the 42 countries and territories it has visited, according to the ship's records.

Arelene Santos, a Manila businesswoman in her 30s, said as she was browsing the aisles that she brought her entire family to see the ship after reading about it on the social media website Facebook.

"We're here for the books but the novelty of going on a ship to buy them is an added attraction," she said.

Retired civil servant Adelaida Valencia, 82, said she liked the selection of books with a positive outlook.

"It's about loving your children, how to live longer and eating healthy foods. That is something you don't see enough of."

GBA Ships began its mission of selling cheap books in poor nations in 1970 when its original vessel, the "Logos" -- meaning 'the word' in Greek -- took to the seas.

The ship sold more than five million books before it ran aground in bad weather in Chile in 1988 and had to be abandoned.

Another of its vessels, the Doulos, was the target of a bomb attack in 1991 when it visited the southern Philippine city of Zamboanga, which has long had a reputation as a hotbed of Islamic militancy. 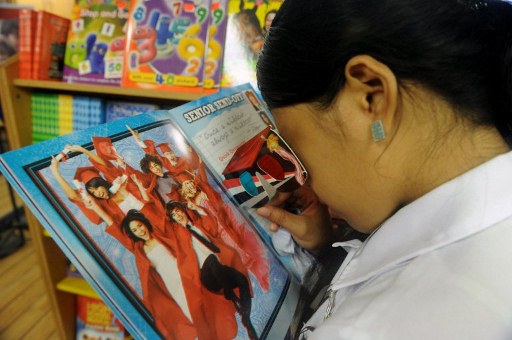 A Filipino student looks at a book on board the Logos Hope. ©AFP

Two young female volunteers died in the blast and many others were wounded, said Gian Walser, the Logos Hope's managing director.

The government blamed the bombing on the Abu Sayyaf, an Islamic extremist group linked by intelligence agencies to the Al-Qaeda network which has been blamed for the worst terror attacks in the Philippines.

"It was a crisis moment, a defining moment," Walser said, recalling the fear and uncertainty that followed.

He said the group decided to press on although it made security adjustments. Its vessels no longer visit the troubled southern Philippines and also by-passes other ports around the world that are deemed dangerous.

The ship's officers said they also made efforts not to ruffle local sensibilities, usually by working through a local church or charity group to prepare for their arrival.

This sometimes requires adjusting the books on display and the group's cultural presentations to avoid any culture clashes. 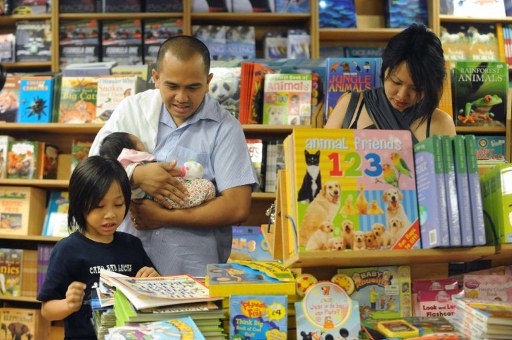 A Filipino family looks at books on board the Logos Hope. ©AFP

"We are here to bless people. We don't want to offend people. We want to do what is right and appropriate," Walser said.

And although GBA Ships is open about its Protestant background, its vessels have been welcomed in countries that are non-Christian such as India, Sri Lanka and several Middle Eastern countries.

After the Philippines, the "Logos Hope" will travel to Indonesia, the world's most populous Muslim nation.

In the meantime, GBA Ships is looking to acquire another vessel, confident that readers will continue to be drawn to its unique concept in an increasingly high-tech world.

by Mynardo Macaraig from AFP