The crumbling oval skeleton of the House of the Bulgarian Communist Party perches like a deserted flying saucer atop Mount Buzludzha in central Bulgaria, visible from miles around.

It is one of a number of enormous communist relics still standing more than two decades after the toppling of the regime they glorified, putting the Bulgarian authorities in a quandary since they can neither maintain nor dismantle them.

"This monument is unique in Europe and, if restored, it can attract tourists, especially Western, and bring money," said Boycho Bivolarski, the Socialist (ex-communist) party chief from the nearby city of Stara Zagora.

Neglect has left the once imposing structure in ruins. Thieves have stripped its roof of most of its panelling, leaving only a hammer-and-sickle emblem hanging sadly at the centre of a ceiling riddled with holes.

A wall mosaic depicting Bulgaria's communist dictator Todor Zhivkov has been destroyed, while those of communist heroes Marx, Engels and Lenin were damaged but still recognisable.

Most of the letters have fallen off the verses of the left-wing anthem "The Internationale" flanking the main entrance of the memorial, inaugurated in 1981, where a graffiti artist has scrawled in huge letters, "Forget Your Past." 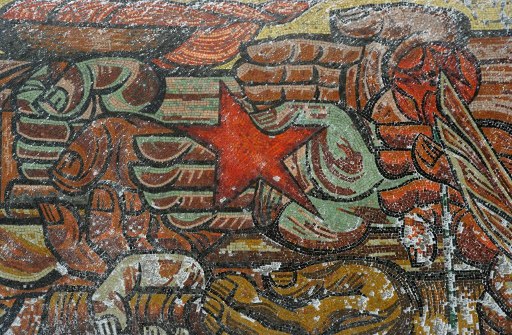 A fresco mosaic in the crumbling oval skeleton of the House of the Bulgarian Communist Party. ©AFP

Still, destroying it would amount to "vandalism" according to National Academy of Art professor Chavdar Popov.

"The monument could interest the young who otherwise ignore socialism," he said, adding that some of Bulgaria's best artists from the era designed the concrete and stone mega-monuments still dotting the country.

But finding an estimated 30 million leva (15 million euros, $20 million) to repair the Buzludzha memorial to its former glory was impossible, according to Stara Zagora's right-wing governor Nedyalko Nedyalkov.

"Let them take care of it if they're so proud of it," he said.

But the BSP managed only to safeguard the entrances of the building against intruders and install warning signs about falling debris to prevent accidents.

Only a handful of the scores of other gigantic monuments from communism have had a better fate.


One example is a 200-tonne stone Soviet soldier standing 17 metres (55 feet) tall in Bulgaria's second city Plovdiv. Nicknamed Alyosha, it was on the verge of being dismantled in 1996 but opposition from the Russian embassy kept the figure in place. 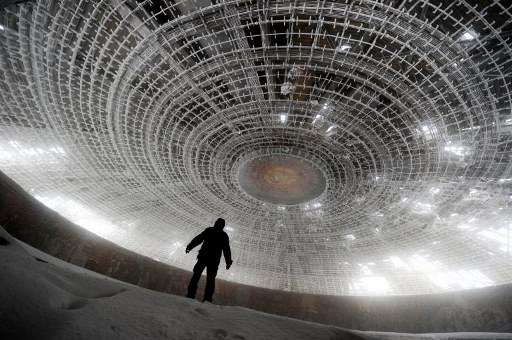 The crumbling oval skeleton of the House of the Bulgarian Communist Party. ©AFP

"The question of whether to keep it has been resolved. For us the monument symbolises also all our soldiers who lost their lives in World War II," Plovdiv mayor Ivan Totev said.

In an example of one of the ways in which these monuments can escape the wrecking ball, he said an additional commemorative plaque is due to be placed next to the monument to honour the 30,000 Bulgarians who died in that war.

But while Alyosha has been saved, controversies flare up occasionally around another key monument to honour the Soviet army in downtown Sofia.

The caption "Abreast With the Times" adorned the short-lived creation that drew crowds before being slammed by the Russian embassy as "an outrageous act of vandalism" and cleaned within days.

Sofia's Socialist Art Museum chief Bisera Yosifova said she appreciated "the sense of humour" of the unknown painters who "alienated the monument from its ideological context." 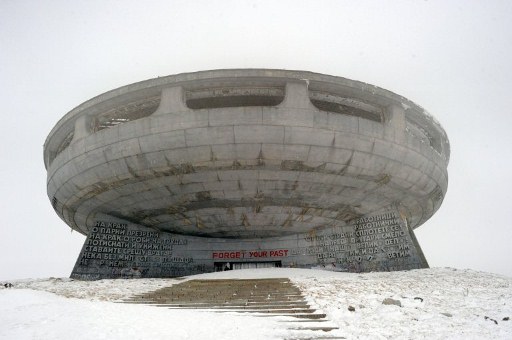 The crumbling oval skeleton of the House of the Bulgarian Communist Party. ©AFP

But she nevertheless advised them to leave the original alone, while adding a copy of the wittily re-painted frieze at its side.

Anti-communist organisations have kept pressing for the monument to be demolished but art historians are opposed.

In 1999, Sofia blew up its mausoleum of communist leader Georgy Dimitrov, built in 1949 on the model of Vladimir Lenin's mausoleum in Moscow.

The building was one of the few of its kind in the world at that time and tearing it down was "a mistake" and "a lack of perspicacity," Yosifova said.

"It could have been transformed into a Socialist art museum," she regretted.

by Vessela Sergueva from AFP