China is making its formidable presence felt at Rio's famed Carnival, supplying much of the synthetic fabric used to make the lavish costumes and accessories worn by samba dancers, musicians and revelers during the five-day extravaganza.

As the mega-event's prepares to start on Friday, local samba schools put the finishing touches to the glittering costumes they will show off during the parades at the Sambadrome, the "temple of Samba," Sunday and Monday. 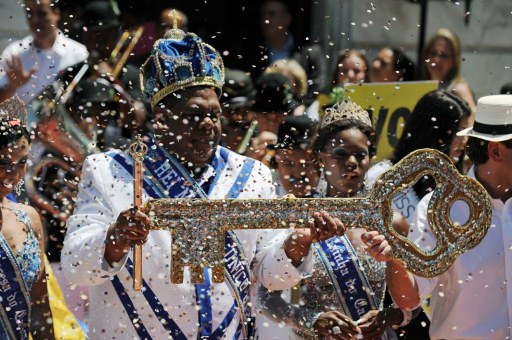 Carnival King Momo (L) gets from Rio's mayor Wduardo Paes the keys to the city during the official launching of the 2012 Carnival. ©AFP

Thousands more scrambled through the narrow streets of the central Rio garment district to buy mascara, disguises, hats, wings and sunglasses for use during the wild street parties that will attract hundreds of thousands of people.

Carnival costumes and disguises are hand-made and for the most part produced in Brazil, but the raw material comes from China, said Jonatan Schmidt, the president of Brazil's association of textile importers (ABITEX).

"In Brazil, we produce only 15 percent of the synthetic fabric needed for the Carnival, the rest is imported mainly from China," he told AFP.

"The number of imported ready-made costumes is negligible. What is important is the raw material that we import," he said. 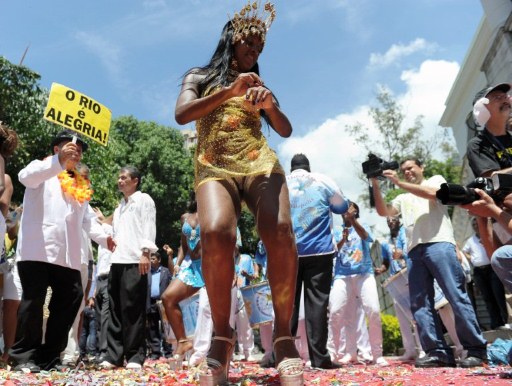 A dancer of Beija Flor samba school performs during the official launching of the 2012 Carnival. ©AFP

In 2011, Brazil's textile production fell nearly 15 percent and imports shot up 53 percent to $1.085 billion compared with the previous year. The main supplier was China, according to Brazil's Institute of Geography and Statistics (IBGE).

China "has the biggest industrial park with competitive prices and good quality," Schmidt said, noting that Brazil has to rely on imports because it does not have major domestic synthetic fabric producers.

"There are just a few small factories with foreign capital that produce to meet their own demand," he said.

At Silmer, one of Rio's major Carnival costume stores, business is brisk. In the past days nearly 1,500 people have been coming in every day to buy, said employee Claudio Muniz. 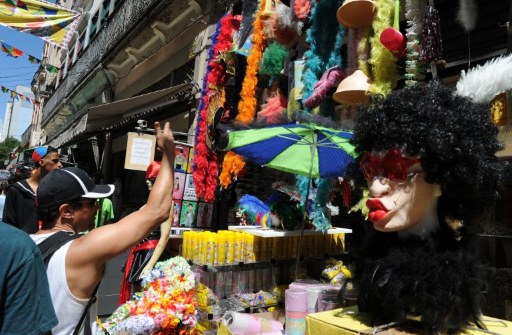 "Fifty percent of our products are imported from China, and they are 20 to 25 percent cheaper than those from Brazil," Muniz said. "The other 50 percent are Brazilian."

The costumes are not imported, but "90 percent of them are made with Chinese-made fabric," he said.

"Brazilians want something cheap, disposable, light, which does not require washing or ironing. It has to be practical and material like cotton and silk won't do because they are expensive and not practical," Schmidt said.

Customers are not always happy with the prices, which like everything else in Brazil, are high.

A 28-year-old lawyer who said she will disguise herself as a fairy during Carnival bought some wings at Silmer for less than eight dollars, but found a costume, priced at 47 dollars, too expensive.

"I'll try to get one cheaper elsewhere," said the woman, who did not give her name.

According to Brazil's foreign trade association AEB, the country posted a $3.40 billion deficit in its textile trade between January and November 2011, $830 million more than the previous year. 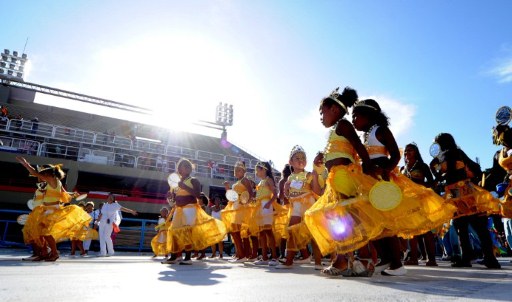 Beijing is now also the largest investor in the South American nation, with Brazil enjoying a trade surplus of some $11.5 billion.