Not yet named but much loved by watchful parents, a newly born baby boy is a small symbol of change: a birth, not a death for Somalia's key war hospital. After more than two decades of bloody civil war, Somalia remains a very dangerous place, but security has slowly improved, with Islamist fighters linked to Al-Qaeda on the back foot despite launching a deadly bombing campaign. For the surgeons of Medina hospital, whose specialised war wound operating theatres were set up shortly after the collapse of the government in 1991, that gradual reduction has meant they can start to focus on more everyday health problems for the first time, and not just bomb blasts or bullet wounds. "Medina... is the thermometer of the temperature of the security in the city," said hospital director Mohamed Yusuf Hassan. 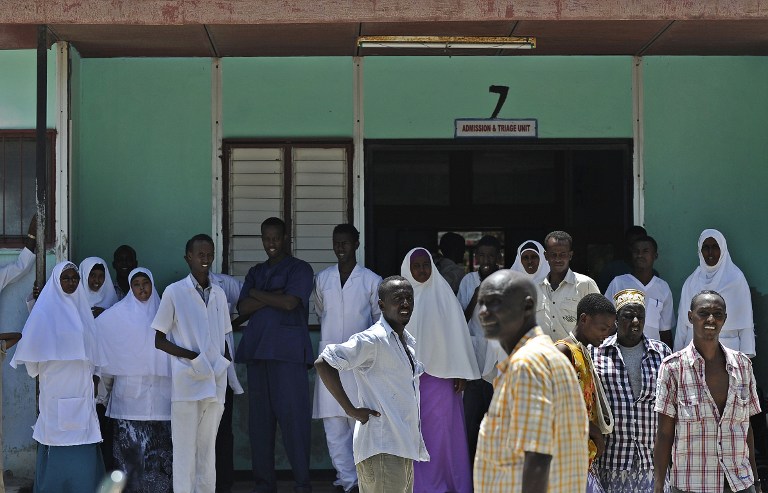 The medical staff at Medina hospital in Somalia's restive capital. ©AFP Surgeons now are tackling elective surgeries -- scheduled operations, not emergencies -- and the decrease in war wounds the Mogadishu hospital treats shows how the "situation has improved", he added. While the war wounded last year made up almost all of the hospital's cases -- 95 percent, Hassan estimates -- that has now eased to around three-quarters. "Step by step security is improving," Hassan said, adding he hoped that in the year ahead elective surgeries could rise to as many as half the hospital's cases. In Somalia, however, improvements are relative. In the emergency ward, a government soldier rests by the bedside of a colleague, shot in the belly last week. Beds crowd even the corridor, with more than a dozen people all shot or wounded in recent attacks by Shebab Islamist extremists, or clashes between rival groups within the often violent city awash with guns. 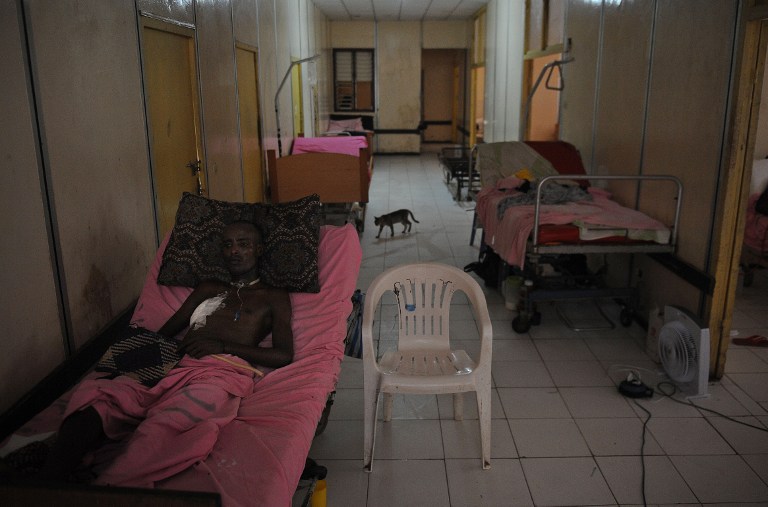 ©AFP But in the obstetrics ward, Shurkri Abdi recovers from a Caesarean section performed to deliver her seventh baby -- and her first child born inside a hospital. "I was living in the bush and I didn't expect to come to the hospital," Abdi said, her still unnamed child sleeping in a cot beside her. "But I fell down and my baby was in danger so they took me here." For Nimo Abdi Hassan, the doctor who delivered the child, such cases signal a shift in Somalia's fortunes. "War-wounded patients only used to be received here," she said. But since the number of cases involving gunshot wounds or shell injuries has fallen, staff are treating a greater variety of cases, she explained. "If peace continues, we could transfer from an emergency hospital to a general hospital for all cases," she said. -- 'I don't know how long it will take to become a normal city' -- Always busy, overstretched surgeons rarely had time for cases that emergency rooms in less-violent cities would tackle, meaning many doctors simply had to drop procedures that are routine in other parts of the world. Now, as the cases of war wounds diminish, doctors in Somalia are for the first time able to start tackling common conditions like appendicitis, ovarian cysts or hernias. "We need training... but in terms of the actual surgical skills, well we have that," Hassan said, adding his doctors are hugely experienced, even if they are not necessarily up to date with the latest techniques or know little but basic operating wards. "They have surgeon's hands... completing surgery after surgery with so much experience," he added. The World Health Organisation is supporting efforts to train doctors like them in Somalia in the skills needed to treat these everyday health problems often ignored during the years of conflict. But there is still a long way to go. Even as the hospital director speaks, the sharp rattle of multiple rounds of rifle fire echoes close by. Shortly after, a man with gunshot wounds is rushed into the hospital for the surgeons to try to patch up. "Before, when there was fighting close by, stray bullets would even injure people inside the hospital, bullets coming through the roof," Hassan said, on a rare break from his work, resting in the shade of a tree in the grounds of the sprawling hospital compound. "It's better now, but still, I don't know how long it will take to become a normal city." Still, those improvements in security have also meant people can reach the hospital more easily, meaning the doctors in Mogadishu are busier than ever. 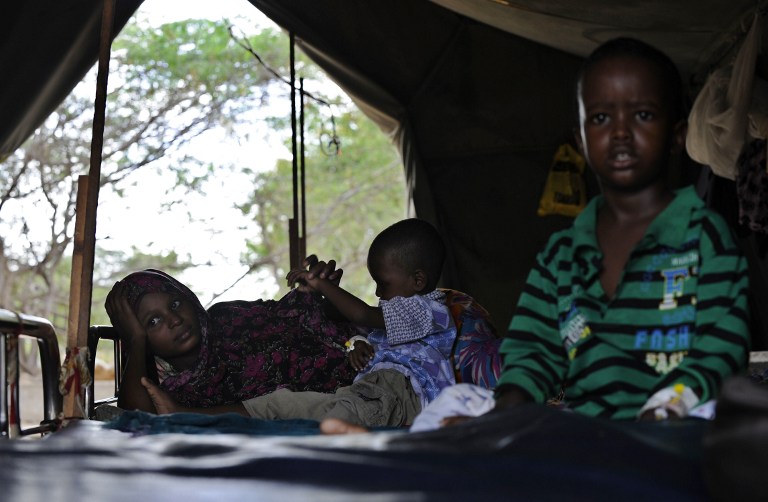 A woman with her sick infant waits at a medical camp. ©AFP In 2011, heavily fortified trenches and sandbag walls cut the city in two, marking the slow street-by-street progress of the African Union (AU) and Somali government troops creeping forward to wrest territory from the Shebab. Today, those frontlines are gone, after the overnight pullout of fixed positions by the Shebab in August 2011. Student doctors once filled the medical school at Mogadishu University, but the compound is now overgrown with thick bushes, the buildings in ruins or inhabited by displaced people, and the main grounds occupied by sandbagged positions of Burundian troops from the AU force. "So much was destroyed in this city during the years of fighting, it will take a long time to return to what Somalia once was," said Abdi Shuib, a former history lecturer at the university, now working as a translator for the Burundians. In the school's place, AU military doctors provide a clinic for locals in need of healthcare. "Things have changed in Somalia, but I still dream of the university opening again, and training returning," Shuib said, on a break between translating for Somalis receiving medical support in a basic army tent.

by Peter Martell from AFP