The isolated kingdom of Bhutan is one of the most expensive holiday destinations in the world and a haven for celebrities and the well-heeled. In 2012, it will become even more costly.

Foreign tourists are required to book through licensed tour operators, who charge a minimum high-season price of 200 dollars per day per person for an all-inclusive package including accommodation, food and transport.

The pristine Himalayan kingdom of snow-capped mountains and gushing mountain streams pursues a policy of "high-end, low-impact tourism", deliberately keeping out the hordes who might spoil its untouched environment.

From the start of 2012, the high-season daily fee will rise to $250 per day per person, meaning a stay in one of the basic hotels as part of the package will cost a travelling couple at least $500 a night. 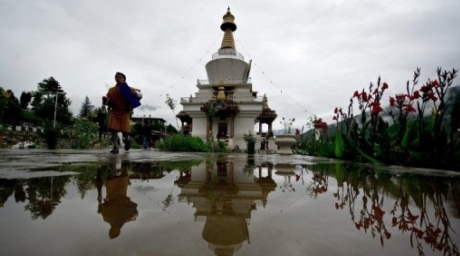 The Choeden Memorial, built in memory of the late third King Jigme Dorji Wangchuk in the capital city of Thimphu. ©AFP

"It may not make economic sense now to be high end, but Bhutan will be preserved for future generations of visitors," the director general of the Tourism Council of Bhutan, Kesang Wangdi, told AFP in an interview.

"If we opened up, our revenue would go through the roof, but at what price? We restrain ourselves from going wantonly along the economic development path without considering the social impact and the environment."

Nevertheless, next year the council hopes to boost visitor numbers by more than 50 percent to 100,000 by offering new types of holiday and improving flight links to cities such as Hong Kong and Singapore.

Bhutan famously follows an economic development doctrine known as "Gross National Happiness", which takes into account the mental well-being of its nearly 700,000 citizens instead of simply measuring financial gain. 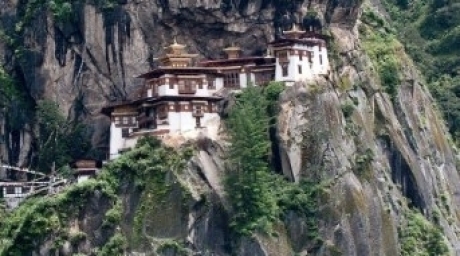 The Taktsang Monastery, popularly known as the Tiger's Nest, stands on a hillside near Paro. ©AFP

The remote and reclusive country, never colonised despite its position between India and China, puts protecting the environment and preserving its unique culture at the heart of its policy decisions.

Citizens have to wear national dress when visiting government offices and many choose to sport the elegant woven outfits in every day life out of national pride.

Bhutan's decision to keep out the masses -- backpackers looking for cheap holidays in the Himalayas head for neighbouring Nepal -- makes it an appealing destination for anyone wanting to escape it all.

Hollywood stars Leonardo di Caprio and Keira Knightley are among those to have recently stayed at the ultra-high-end Uma Paro resort, one of a number of luxury hotels catering to wealthy travellers in the country.

Staying at a luxury hotel is an additional cost on top of the basic $200-a-day visiting package, meaning a night in an Uma Paro suite costs upwards of $1,000 a night.

Ravi Nischal of the Taj Group, the Indian-owned chain of luxury hotels with a property in Thimphu, says Bhutan has a "snob value" because not many people have been to the country and most can only dream of visiting.

"The destination has connotations of luxury," he said. "There is also a lot of mysticism that surrounds Bhutan. It's known as the last Shangri-La," he added, referring to the Himalayan paradise described in the 1933 novel Lost Horizon by James Hilton. 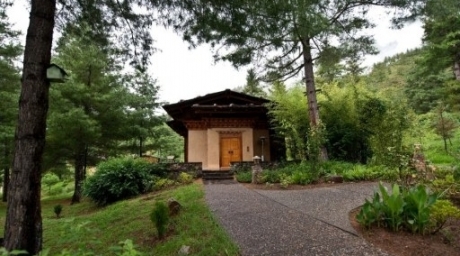 A general view of the Luxury Suite villa at the Uma Hotel in Paro. ©AFP

The "Land of the Thunder Dragon", as it is also sometimes known, had no roads or currency until the 1960s and allowed television only in 1999 in a bid to shield itself from foreign influences.

Nicole Feerbrucker, a 56-year-old therapist from the Netherlands, told AFP that she had wanted to visit since seeing a photo spread of the former king's coronation in National Geographic magazine in 1974.

She says the daily tariff and the costly flight on the only airline linking the country to the outside world -- state-owned Druk Air -- made the holiday expensive for her and her husband and daughter.

"But I think coming here and having to pay such an amount of money keeps the country the way it is. The influences of outside have been diminished by that," she says.

The target of 100,000 visitors next year is causing unease for some in Bhutan who fear the impact of a sudden influx. 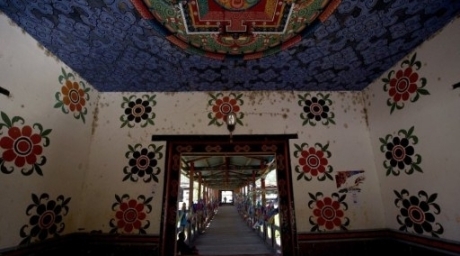 Traditional painitings are seen at a bridge ovelooking the weekend market in the capital city of Thimphu. ©AFP

Karma Tshiteem, the influential head of the Gross National Happiness Commission, an agency that vets government policy, says the new tourists can be easily absorbed with minimum harm.

"The key part of our strategy of reaching 100,000 without any of the accompanying negative impacts is spreading the number throughout the year and throughout the country," he told AFP in an interview.

At present, almost all tourists arrive in spring and autumn for week-long cultural holidays in the three valleys that are easily accessed from the town of Paro, where the country's only international airport is located.

The Tourism Council wants to attract visitors for spa-type "wellness" holidays, conferences, and adventure tourism -- though mountaineering will remain off-limits because Bhutan's peaks are considered sacred.

By doing a better job of marketing Bhutan overseas and increasing flight links, tourism officials hope more people will visit but without disrupting one of the world's most protected countries.

By Adam Plowright from AFP