After the ash, Iceland volcano rakes in tourism cash

After the ash, Iceland volcano rakes in tourism cash

Iceland's volcanoes gained notoriety last year for their ash-spewing ability to ground airlines and make a mess. But they also pay their dues, drawing tourists eager to see the source of the chaos.

"People are really interested. They want to stand in the crater of the volcano that made them lose their flight," laughs Arsaell Hauksson, in his 30s. He runs a campground at the base of the Eyjafjallajoekull glacier that encompasses the notorious Eyjafjoell volcano, whose eruption in April 2010 stranded more than eight million travellers.

The possibility of scrambling up an active volcano -- Iceland has around 130 of them -- has long been a tourist magnet for the North Atlantic island state. But last year's Eyjafjoell eruption offered unbeatable advertising.

"We all know someone who was affected... This is the eruption people will be talking about for years to come," said Hauksson. His own business is bustling despite an icy start to the summer. 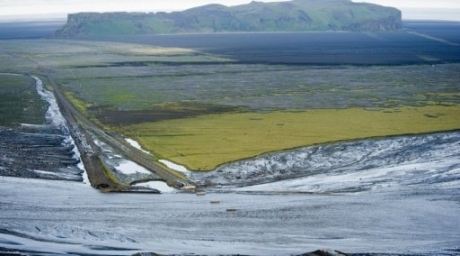 Destroyed bridge near Vik after a massive flood of meltwater poured out of Iceland's Myrdalsjoekull glacier. ©AFP

Things weren't quite so rosy when the peak began erupting last year, spewing nine kilometres (5.5 miles) into the sky.

By Icelandic standards, Eyjafjoell was puny -- the Grimsvoetn volcano which erupted this May spat out more ash in one day than Eyjafjoell did in 40. But strong winds pushed Eyjafjoell's output towards Europe and caused the biggest air space shutdown since World War II.

"I had my best booking ever for May last year ... and nobody showed because of the ash," laments Unnar Gardarsson. The 49-year-old heads Oebyggdaferdir, or Ice Safari, which for the last five years has offered tours of Iceland's desolate highlands.

Sixteen months later, his mood has changed as he stands gratefully at the edge of Eyjafjoell's still fuming crater: the eruption is paying off.

"It has done a lot to let people know Iceland is on the map. And it has been really good for my business," he says.

"Eyjafjallajoekull was always very beautiful and now it's famous!"

Gardarsson began offering trips up the glacier in May this year and has already taken some 50 tourists up to the crater, each dishing out a whopping 39,000 Icelandic kronur (250 euros, $350) for the experience.

To reach the top, Gardarsson leads small groups on quad bikes up the rugged landscape, which starts with spongy yellow-green moss broken by jagged black lava rock and bubbling streams. 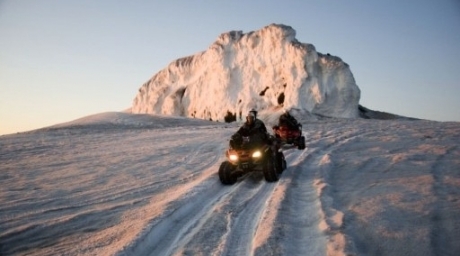 Tourists are driven up the side of the Eyjafjoell volcano to reach the crater. ©AFP

Once they hit the ice, the all-terrain vehicles are swapped for bright red belted quads that effortlessly climb the steep snowbanks, still sprinkled with last year's ash making the glacier look like a gigantic charcoal sketching.

Along with helmets, the group wears padded, water-tight jumpsuits and boots that can withstand temperatures down to minus 90 degrees C (minus 30 degrees F), provided by Gardarsson.

"It's pretty incredible," exclaims Nancy King, a 36-year-old advertising executive from New York standing at the edge of the steaming, black crater. A steep, rocky riverbed created by last year's massive meltwater flood stretches down below.

"I've never seen anything this enormous before," she says, gazing at the breathtaking view of mountain ranges, massive rivers and the island-specked Atlantic in the distance.

"In New York, I spend most of my time sitting in front of a computer ...This is definitely a different day."

According to Icelandic Travel Industry Association chief Arni Gunnarsson, volcanoes and other natural phenomena are the main tourism draw to the country.

"That is what tourism to Iceland is all about: the extraordinary nature you see here, the glaciers, the volcanoes," he says.

"And last year's eruption really put the country more on the map as such a destination."

With a tiny population of only 320,000 inhabitants, Iceland has already had a record 206,000 tourists visit in the first half of this year alone, recent statistics showed. This is an increase of more than 20 percent from 2010, and while the figures didn't show how many visited volcanoes, Gunnarsson says it was likely "a large portion".

Despite volcanoes' tourist draw, experts warn they are not without risks.

"It's problematic, because volcanoes are exciting and people want to see them and get close to them. But it's not good to have many people in the wrong place when an eruption happens," cautions Magnus Tumi Gudmundsson, a geophysicist at the University of Iceland geophysicist.

While no one was hurt in Iceland's recent eruptions and Eyjafjoell today is believed to be safe, its northeastern neighbour Hekla is seen as "a prime example of dangerous volcano tourism."

Hekla is one of two Icelandic peaks that began rumbling earlier this month and which experts say could go at any time. It "gives a very short warning. You are taking a real risk hiking near the top now," Gudmundsson says.

But Gardarsson, who has a tourist lodge at the foot of Hekla and also offers quad tours up that volcano, isn't worried.

"I'm not that unlucky," he insists, conceding he always checks online volcanic activity measurements before heading up.

And seeing what the Eyjafjoell eruption is doing for his business, Gardarsson wouldn't mind if Hekla blows too.

"An eruption would be ok," he jokes, "as long as the wind blows away from me."

By Nina Larson from AFP