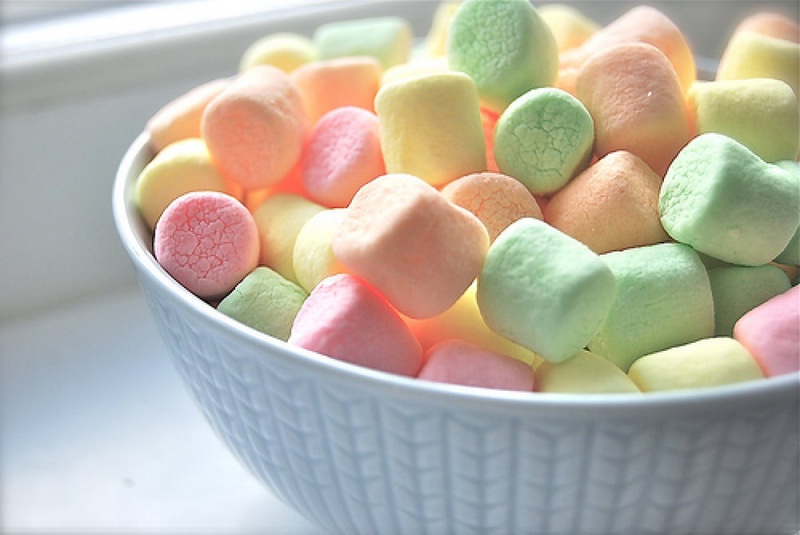 Marshmallows roasted over a campfire may be a staple of American childhood, but few realise the pillowy treats were invented in 19th-century France, where they are bouncing back into foodie fashion.

Sweet or salty, flavoured with fruit, flowers, vegetables -- even fish -- classic versions and novel takes on the puffy pastel-coloured cubes are winning a new fan base.
"Sales have been booming of late. And we are not selling just to kids!" said Julien Merceron, pastry chef at the 250-year-old Parisian confectionary "La Mere de Famille" whose best-seller is a pale green pear-flavoured marshmallow.
Star French chef Alain Ducasse recently dug out the traditional recipe for "guimauve" -- as the cottony sweet is known in France -- promptly declaring his own marshmallows "the best in the capital".
At the Fauchon luxury confectioner's in Paris a young sales attendant said she was selling bucketloads of the treats, priced at nine euros (11 dollars) for a packet of a dozen. 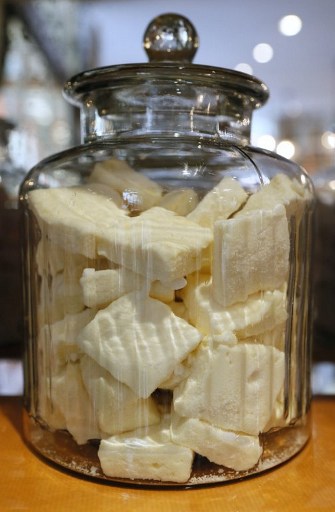 A jar with marshmallows. ©AFP
"Our customers are mostly elderly people and children -- and among them there are a lot of Japanese. They love that it melts in the mouth and that it feels so home-made."
"They are more and more in fashion," agreed Merceron, who dates the start of the craze to around two years ago. "When times are hard, people tend to look to the past. Marshmallow is linked to childhood, and that's clearly part of the explanation."
When it comes to marshmallows as comfort food, France's answer to the campfire experience is a chocolate-coated pink teddy bear -- bite off the head first, then wolf down the body -- a staple of every French childhood.
That is certainly true of Parisian schoolteacher Nicole Bermann.
"When I was a little girl, my grandmother would always give me marshmallow bears. Nowadays, whenever I feel down, I eat a whole packet," she told AFP.
Sign of its enduring appeal, the little teddy -- born 50 years ago in a factory in northern France -- has a cult following and its own Facebook page.
-- Anyone for squid marshmallow? --
The very first marshmallows date back as far as ancient Egypt whose people boiled up an extract of the marshmallow plant, Althaea officinalis, into a chewy medicinal paste sweetened with honey and used to soothe sore throats.
Cut to 19th-century France, where the country's confectioners developed a version of the recipe intended purely for pleasure -- called "pate de guimauve" or "guimauve" for short. 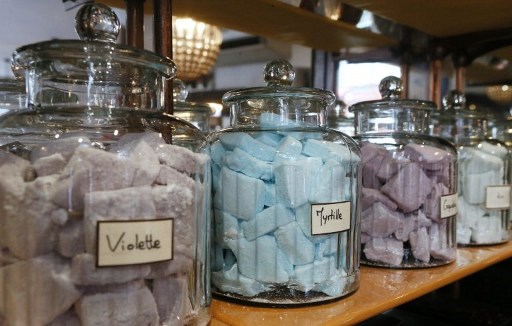 Jars with marshmallows. ©AFP
Made with egg white meringue and often flavored with rose water, guimauve was a direct ancestor of today's marshmallows -- which get their gooey texture from gelatin instead of the marshmallow plant.
Industrial marshmallows made their appearance in 1948, when Alex Doumak, the founder of the US confectionary giant Doumak Inc, patented a process allowing long cylinders of the sweet to be mass-produced at low cost.
But small confectioners -- along with amateur cooks on both sides of the Atlantic -- have continued to boil up the sweets too.
High-end outfits like "La Mere de Famille" use all natural-flavourings and simple recipes miles away from their additive-laden industrial counterparts -- but Merceron does admit to using artificial colourings "within reason".
Yannick Conraux and his partner Florence, a couple of patissiers from eastern Lorraine, wanted to take things one step further.
"My husband had a childhood dream, to make a completely natural marshmallow with egg whites, sugar and natural food colouring," said Florence Conraux.
Pina Colada marshmallow and marshmallow jam are the proudest creations of the pair, who are poised to start exporting over the border to Germany. 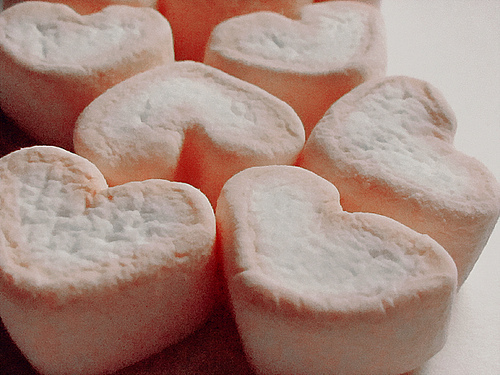 Marshmallow hearts. Photo courtesy of cutestfood.com
Eaten toasted on a stick, or popped straight in the mouth, strawberry, orange, bergamot, aniseed and orange-flower are the most sought-after flavours from today's French marshmallow-lovers.
At Fauchon the puffy sweets come in blackcurrant, orange or raspberry. But why stop there?
Patrick Jeffroy, a chef from the Finistere region of Brittany, serves up marshmallow flecked with seaweed, whipped with lobster coral, Thai curry or squid ink, to diners at his restaurant in Carantec.
"I work marshmallow together with seafood, you get new flavours from the combination of fish and gelatin," explained the Breton chef, unafraid of taking marshmallow into bold new territory.
by Isabelle Toussaint from AFP