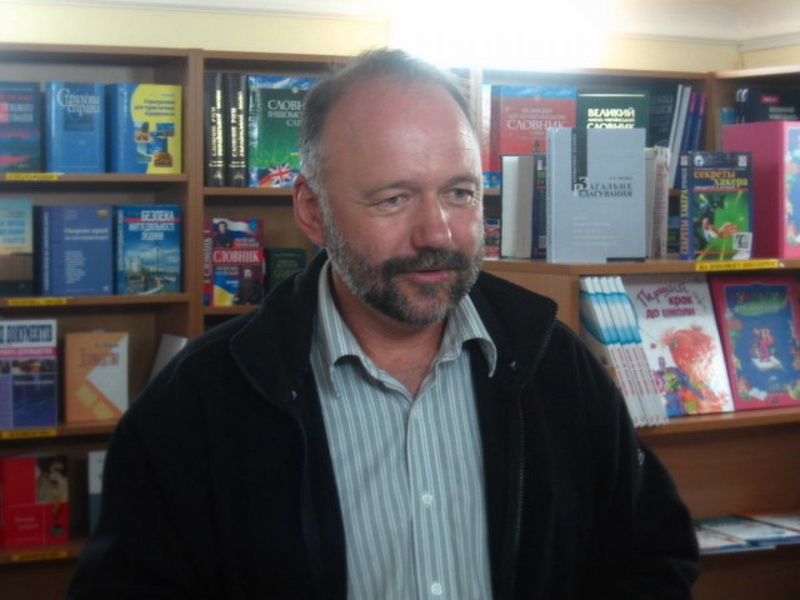 Andrey Kurkov. Photo courtesy of wikipedia.org
The long-running opposition protests on Kiev's central Independence Square are becoming a "school for revolution" as the country's leaders lose touch with society, top Ukrainian novelist Andrey Kurkov told AFP. The 52-year-old is one of the most-read authors of the former Soviet Union, with his satirical Russian-language novels, notably "Death and the Penguin," translated into many languages. He said he regularly goes to Independence Square, known as the Maidan, which protesters have occupied since Ukrainian President Viktor Yanukovych in November scrapped a rapprochement with the European Union under pressure from Russia. "The Maidan is a school for revolution. There are a lot of crazy people and colourful characters here, but there are also plenty of people who are consolidating their activism," he said. Kurkov was also a firm supporter of the 2004 Orange Revolution, which took place on the Maidan. The protest led to a rerun of rigged polls claimed by Yanukovych, bringing pro-Western opposition leaders to power. The writer's involvement in the Orange Revolution prompted a dramatic fall in the print runs of his books in Russia. 'A social explosion' Kurkov, who has a British wife and three children, is known for his darkly comic style. The hero of his novel, "Death and the Penguin," writes obituaries in advance for a local newspaper, only to find his subjects rapidly meeting premature ends. Kurkov was on the jury of the 2009 Man Booker International Prize which picked Canadian short story author Alice Munro. In 2010, when President Viktor Yanukovych came to power amid disillusionment with the squabbling Orange Revolution leaders, Kurkov said that in his view, one "can only know one Maidan in a lifetime." But he said he has now completely changed his mind, and believes there could be a "third Maidan, then a fourth and so on." This form of protest "is now rooted in the consciousness of the people," he said. Hundreds of thousands of Ukrainians have taken to the street in the latest protests, particularly after riot police violently dispersed activists, in what Kurkov called a "social explosion," The protests have "shown that half the country will never agree to live according to (the authorities') principles," he said. Ukraine's most hated politician Kurkov was deeply critical of the Ukrainian leadership, saying: "the behaviour of Viktor Yanukovych and his allies is absolutely not in line with the times." "No Ukrainian politician has gathered so much hatred in the country or been so little respected abroad," he said of Yanukovych. For Yanukovych, receiving a $15 billion bail-out from Russia as a reward for scrapping the EU deal was a "very serious psychological defeat," he said. "From now on he is dependent on the mood" of Russian President Vladimir Putin, the writer said. Yanukovych has misjudged the strength of the pro-European mood in Ukraine, where civil society "has developed much more quickly than in Russia," Kurkov said. "Western Ukraine, on the border of Europe, has become virtually European, while eastern Ukraine is close to Russia but has ceased to be part of Russia." "It is only in Crimea (which formally became part of Soviet Ukraine in 1954) that the pro-Russian mood is still strong. In the Donbass (the Russian-speaking industrial region that is Yanukovych's heartland), no one wants to unite with Russia," he said. As for Yanukovych himself, he has "nothing in common with the European mindset."