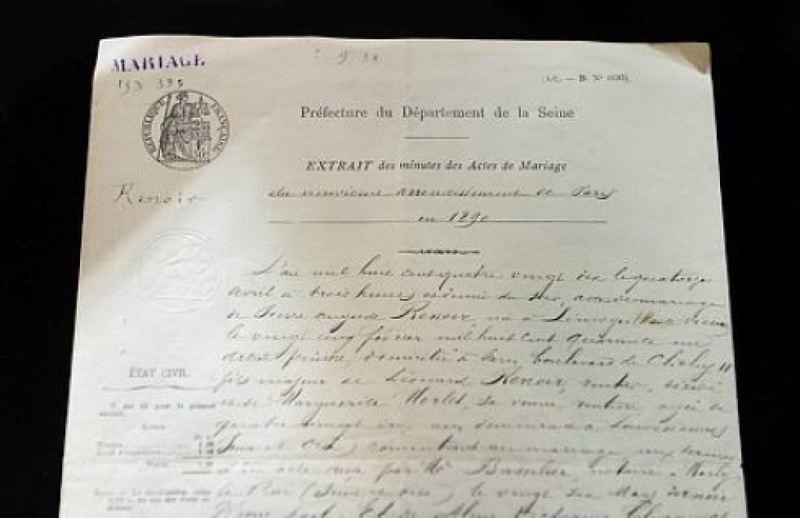 Photo courtesy of nst.com.my
A collection of over 100 letters, photos, plasters, drawings and personal items that once belonged to Pierre-Auguste Renoir were sold at auction Thursday in New York, despite protests from the Impressionist master's great-grandson, AFP reports. Sale organizer Heritage Auctions, which billed it as the largest collection of Renoir memorabilia, said the items earned nearly $1.3 million in total -- far short of the hoped-for $3 million. Renoir's glasses, his signature polka-dot scarf, his marriage certificate and letters written to him by friends and contemporaries such as Claude Monet, Edouard Manet and Auguste Rodin all went under the hammer. The entire collection belonged to one of Renoir's grandsons, Paul, who moved to the United States and sold the belongings before his death in 2005. In France, Jacques Renoir, the artist's great-grandson, denounced the "dismembering of Renoir's private life by publicly selling family memorabilia... including personal objects, personal letters and photographs including Renoir on his death bed." In an open letter to French Culture Minister Aurelie Filippetti, the Orsay Museum in Paris and the Renoir Museum in the southeastern French city of Cagnes-sur-Mer, he expressed his desire for the two institutions to buy some of the items. The sale generated "huge" interest, according to Brian Roughton, managing director of fine arts for Heritage Auctions. "Various museums have been here, French museums mainly," he said, refusing to name exactly which ones, but saying "that the most major of all have been here to go through the collection." The items were purchased from Paul Renoir by Rima Fine Arts gallery, in the southwestern state of Arizona. Heritage has not named the seller, but Rima Fine Arts has advertised the event on its Facebook page. Jacques Renoir's anger did not go very far with Roughton, who said the artist's possessions unquestionably belonged to Paul Renoir and his wife. "There has never been a dispute that they owned it. They first consigned it as one lot -- they wanted to sell the whole thing. At that point, if Jacques Renoir wanted to buy it, he should have bought it, it would be his," he said. Most of the letters -- some of the most controversial of the items up for sale, including ones written to the artist's wife, Aline, about his art -- sold for well above their pre-sale estimates. The priciest to his wife ended up going for $12,500, while the highest bid for a letter to his son, fellow painter Jean Renoir, was $7,000. Also part of the sale was the painting "Les Becasses" (The Woodcocks) completed only a few hours before the artist's death at age 78 on December 3, 1919. It sold for $125,000, just over its estimated value of $80,000 to $120,000. But a number of sculptural plaster maquettes -- created during Renoir's final years with the help of a young assistant Richard Guino, at the painter's home in Cagnes-sur-Mer -- did not sell and several others went for well under their estimates. And one of the items anticipated to fetch the most money, the "Grande Venus Victorieuse," a large, 1.8-meter (5-foot-11-inch) sculpture, sold for $545,000, just around half the estimated value of $900,000 to $1 million.
Malians pick new president in crucial run-off