In a show of outrage Afghan War veterans, representatives of Great Patriotic War veterans [World War II equivalent in the post-Soviet countries], veterans of Chernobyl and participants of the December Riots “Zheltoksan” publicly stabbed with a weapon and then burned a copy of the lastest issue of Anyz Adam: Zhuldyzdar Otbasy magazine that featured Adolf Hitler on its cover, Tengrinews reports.

Such actions were directed against the magazine’s perceived glorification of the Nazi Germany leader and the position of the main editor Zharylkap Kalybai on the issue.

“Why should we propagandize Hitler’s personality here in Kazakhstan? Is he an example for us? The magazine’s editorial staff has committed a grave mistake, especially it issue came out days before the Victory Day celebrations [that take place on May 9 to commemorate the victory of the Soviet Union over Nazi Germany in post-Soviet countries]. How can we stand them writing that 'Hitler was not a fascist'?” chairman of one of the veterans unions Serikbaev Kim spoke in outrage. He also lamented the fact that only a couple of pages were devoted to Kazakh heroes of the WWII, who, in his opinion, should be on the cover, not Hitler.

Granddaughters of general Panfilov of the legendary 316 Rifle Division had joined the rally in support. One of them, Aigul Baikadamova said: “We are deeply outraged by the publication that glorifies Hitler. We believe that the magazine should be closed and the editor prosecuted". 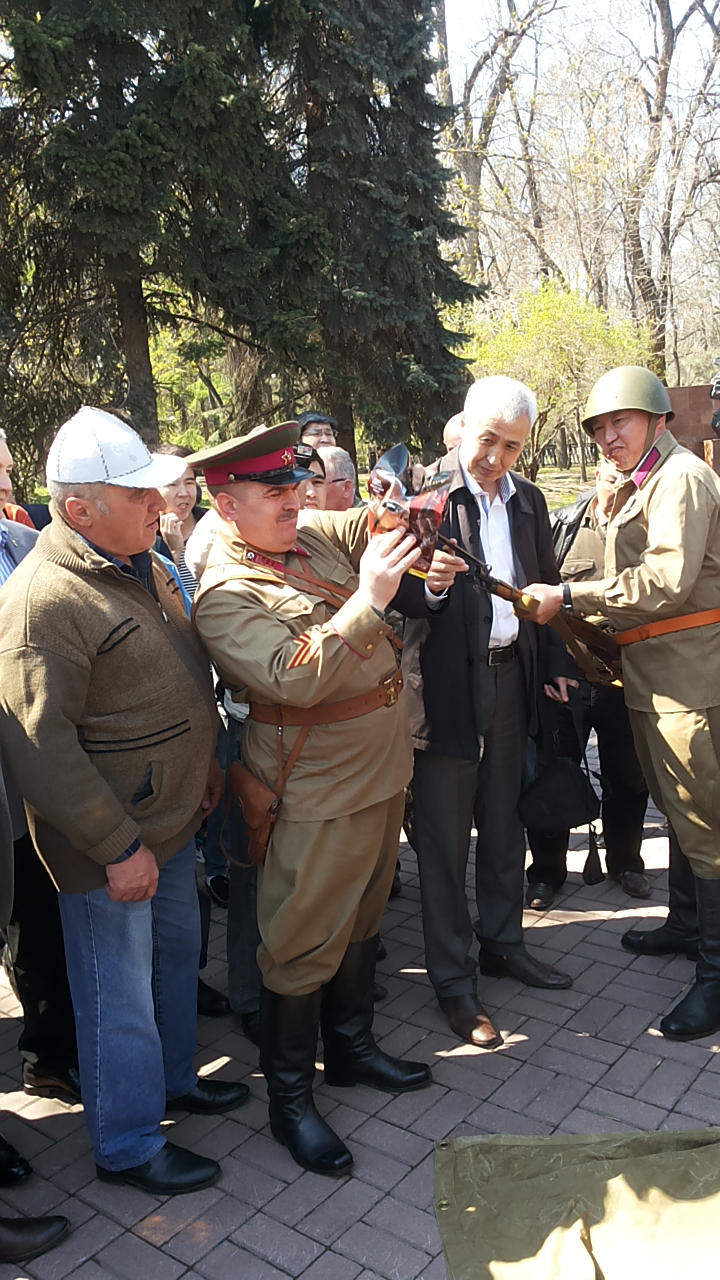 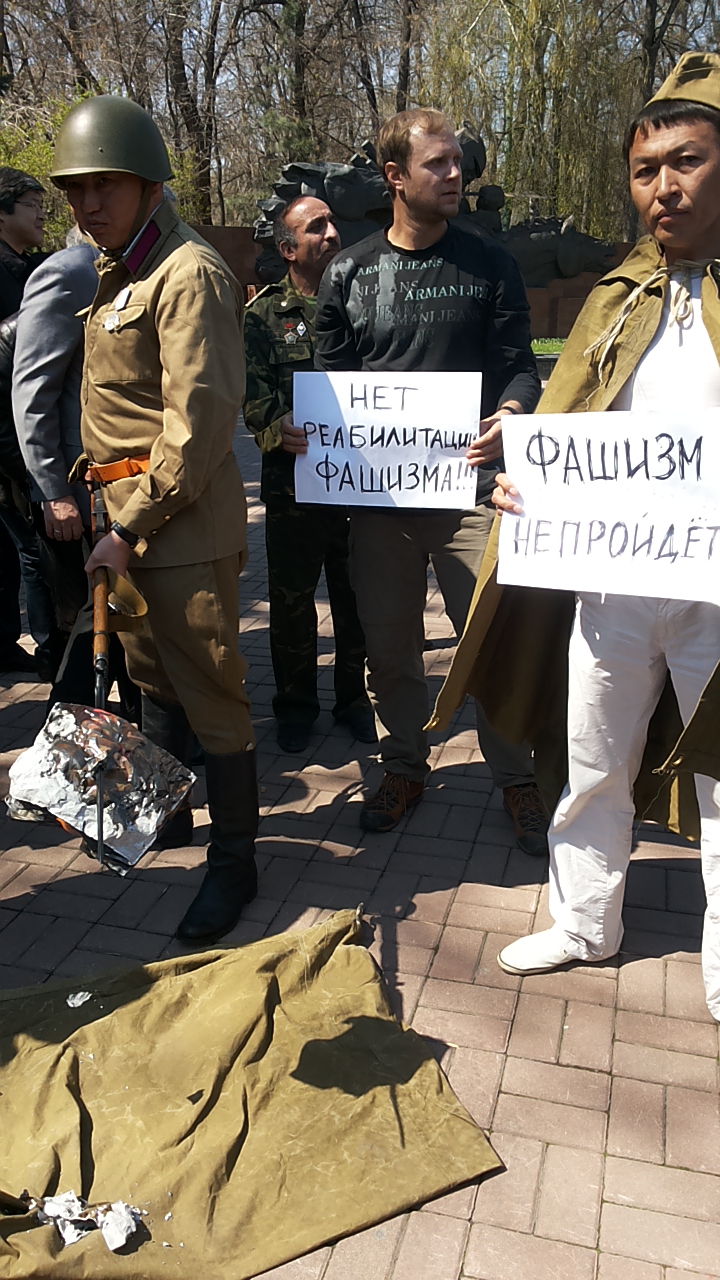 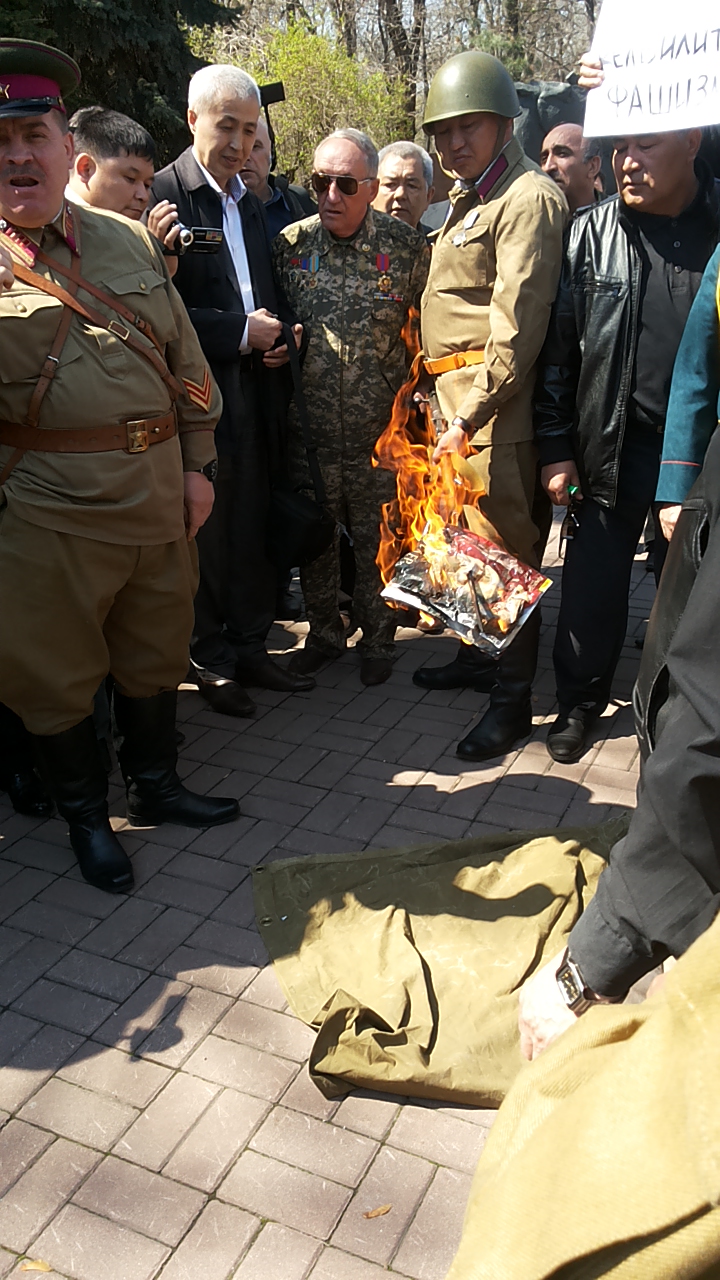 The latest issue of the Kazakh-language magazine Anyz Adam was entirely devoted to the 125th anniversary of Adolf Hitler. The magazine describes him as a strong personality who fought for the rights of his people. One writer compares Hitler with Putin, albeit noting that the actions of the Russian president can hardly lead to similar consequences as in the WWII.

The Russian Embassy in Astana was swift to react and on April 18 sent a note to the Foreign Ministry of Kazakhstan in connection with the April issue of the magazine. This was also reported on the official website of the Russian Ministry. "On the eve of the 69th anniversary of our common victory in the Great Patriotic War that claimed lives of millions of people, both Russian and Kazakh, the emergence of this kind of a “prop book” [propaganda material] is doubly blasphemous,” the official statement from the Russian Foreign Ministry said. “We noted that Kazakhstan's  Agency for Communication and Information promptly commented on this issue of the magazine. Its content had signs of violation of the Constitution and laws of this country. We hope that comprehensive measures will be taken in this regard.”

In fact, the press service of the Agency for Communication and Information of Kazakhstan commented on the issue by saying that the "content of the magazine has signs of violation of the Constitution and laws of the Republic of Kazakhstan in terms of incitement of social, national, ethnic, racial or religious hatred (article 164 of the Criminal Code).” If charged Kalybai, the chief editor of the magazine, may face up to 12 years of imprisonment for this crime.

To counter the charges leveled against him Kalybai spoke at a press conference this Monday, where he claimed that the allegations were baseless. He pointed out that the magazine did not glorify Hitler but, on the contrary, depicted him as an evil personality. He said that only one author – Nagashybai Yesmyrza – gave his personal opinion that Hitler was not a fascist, which does not reflect the opinion of the editorial staff of the magazine. Kalybai also called onto those who consider the content of the magazine inappropriate to translate the text [into Russian] and make an expertise, which, in his words, will show that there was nothing resembling fascism in the maganize. He added that there were issues of the magazine that were devoted to Kazakh heroes, including Panfilov.

Moreover, there were issues depicting other controversial personalities, such as Stalin and Goloshchekin [first secretary of Kazakh SSR from 1925 to 1933; he was actively pursuing sedentarization of nomadic Kazakhs, which led to enormous loss of life]. These issues, in Kalybai's words, 'surprisingly did not create any public discontent.