Porsche Cayenne ran over a girl near the site of a traffic accident involving a police officer in Almaty01 июня 2011, 14:41 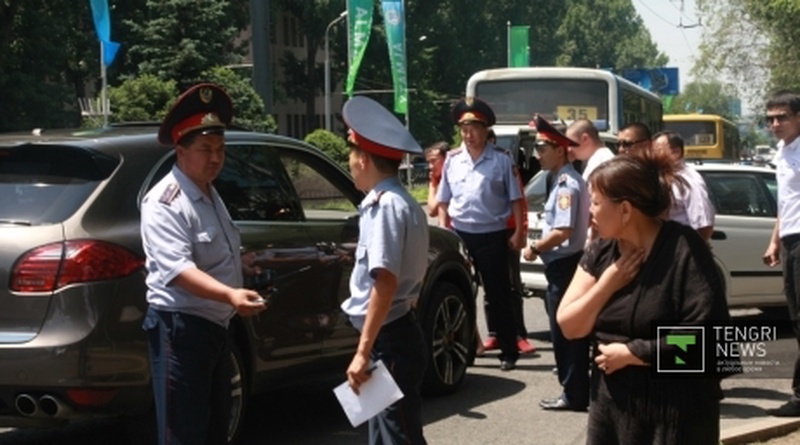 At the accident site. Photo by Chingiz Dzhumagulov©
A Porsche Cayenne ran over a girl not far from the site of a traffic accident injuring a road police officer in Almaty , Tengrinews.kz reports. The incident happened on Abai street between Furmanov and Dostyk streets. After the accident the driver helped the girl inside his car. After that he drove to policemen standing at the place of the previous car accident and told them what happened. The girl was hospitalized. The driver was led off by policemen. As per the Porsche Cayenne driver, the girl was running across the busy road in the wrong place. There is no information of the girl's condition yet. Police refuses to comment the incident. The accident involving a police officer at the crossing of Abai and Furmanov streets happened a little over an hour before the accident with the girl. As per the initial information, the police car was hit by a bus. The bus driver's mother who arrived to the scene shortly after the accident insists that her son is not guilty. According to the mother, the police officer who was regulating the traffic flows on the street crossing is the one to be blamed for the accident. First he gave a signal to the bus driver to keep moving, but then he abrubtly changed his mind and signalled to the police car to go through first. This caused the accident with the bus crashing into the police car injuring one of the policemen. The exact causes of the accident are being investigated.