Kazakhstan’s Ambassador to Iran hands in credentials to Ahmadinejad 17 марта 2011, 16:02 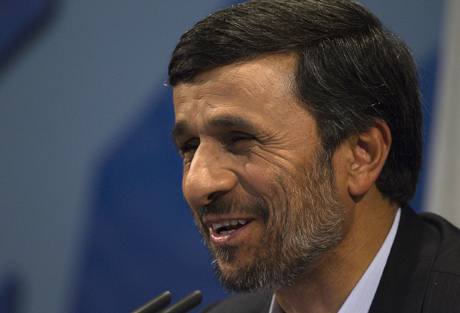 Kazakhstan’s Ambassador to Iran hands in credentials to Ahmadinejad
Kazakhstan’s Ambassador to Iran Bagdat Amreev has handed in credentials to Iran's president Mahmoud Ahmadinejad, Intefax-Kazakhstan reports. The sides agreed that the two nations had reached a high level of cooperation within Conference on Interaction and Confidence-building Measures in Asia (CICMA), Organisation of the Islamic Conference (OIC), Economic Cooperation Organization (ECO) and Shanghai Cooperation Organization (SCO). The Kazakh Ambassador stressed that the major issues in bilateral cooperation are to define the legal status of the Caspian Sea and to launch within reasonably shortest time the Uzen-Gyzylgai – Bereket – Etrek railway running from Kazakhstan to Iran across Turkmenistan. He also suggested establishing sworn brotherhood ties between the two nations. The Ambassador believes this will accelerate economic and culture projects between Kazakhstan’s oblasts and Iran’s provinces. Iran’s President expressed his readiness to facilitate resolving all issues in bilateral and multilateral frameworks. Earlier Vesti.kz reported that in November 2010 heads of the five littoral states – Azerbaijan, Iran, Kazakhstan, Russia and Turkmenistan – convened for a summit. The main issue on the agenda was to define the legal status of the Caspian Sea. The nations agreed on introducing a moratorium sturgeon catches in the Caspian.