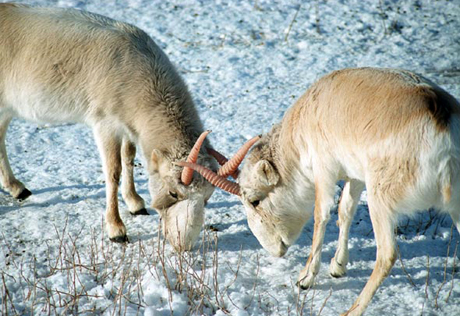 Kazakhstan to launch saiga antelope protection campaign
Kazakhstan’s Ministry of Agriculture believes a campaign to raise environmental awareness of the local population with regards to saiga antelope, an endangered species, will help to maintain population of the rare animal. March 12, Kazakhstan is launching a wide-scaled campaign to encourage Kazakhstan residents, especially those living close to natural habitats of the saiga antelope, to appreciate this endangered species. A raft of photo and video materials will be used to educate children and adults on environmental issues to help conserve the animals. Journalists are also welcome to contribute to the effort. The saiga (Saiga tatarica) is an antelope which originally inhabited a vast area of the Eurasian steppe zone from the foothils of the Carpathians and Caucasus into Dzungaria and Mongolia. They also lived in North America during the Pleistocene. Today they are found only in a few areas in Kalmykia (Russia), Kazakhstan, and western Mongolia. The saiga is classified as critically endangered by the IUCN. There is an estimated total number of 50,000 Saigas today, which live in Kalmykia, three areas of Kazakhstan and in two isolated areas of Mongolia. Another small population in the Pre-Caspian region of Russia, remains under extreme threat. Kazakhstan in November 2010 reaffirmed a ban on hunting saiga antelopes, and extended this ban until 2021, as the Central Asian nation seeks to save the endangered species.