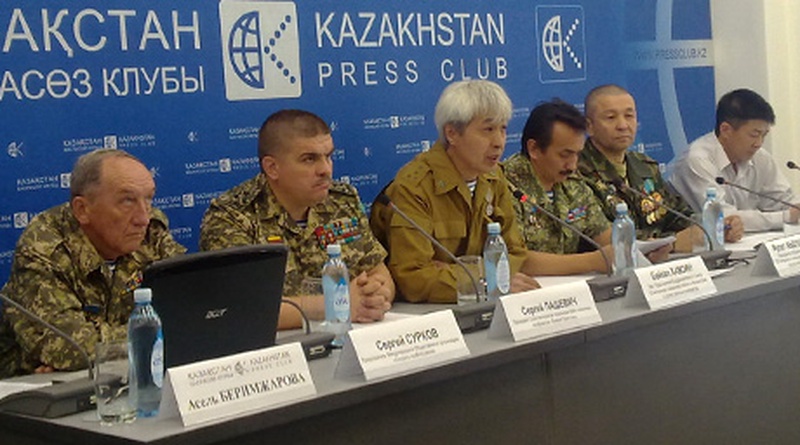 Press-conference of public associations of veterans and disabled of Afghanistan war. ©Galima Gabdullina
112 thousand signatures were collected in Kazakhstan against sending Kazakh officers to Afghanistan during 12 days of campaign. 4,500 of them were collected in Almaty, Tengrinews.kz reports. The first stage of campaign completed on June 22. Information on the second stage is kept secret. “If Kazakhstan decided to do this, we will bear the responsibility. Neither the state, nor the people of Afghanistan asked for our help! NATO applied to us. They constantly want war. We are not against the parliament, we are against thoughtless actions,” emphasized professor of Kazakhstan MIA (Ministry of Internal Affairs) Academy and police major-general Murat Kalmatayev. Chairman of the Union of Afghanistan war veterans of Bostandyk region Ali Davilbekov said that if Kazakhstan decides to send military troops to Afghanistan, this will effect every resident of the country. Earlier Tengrinews.kz English reported that the Lower Chamber of the Kazakhstan Parliament approved the draft law to send Kazkahstan experts to Afghanistan. It triggered a reaction from Taliban. It warned Kazakhstan that its decision to deploy troops to support NATO in Afghanistan will have grave consequences. Later official representative of Foreign Affairs Ministry said that only four Kazakhstan officers will go to Afghanistan. At the same time veterans and disabled of Afghanistan war demanded resignation of Kazakhstan Parliament. Later Kazakhstan Senate dismissed the draft law On ratification of the agreement in the form of notes exchange between Kazakhstan and North Atlantic Treaty Organization on participation in activities of the international security assistance forces in Afghanistan. By Irina Mikhailova