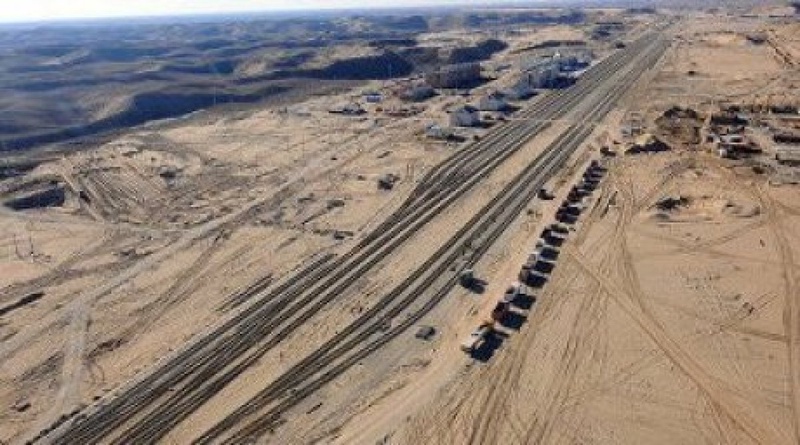 ©RIA Novosti
Presidents of Kazakhstan and Turkmenistan Nursultan Nazarbayev and Gurbanguly Berdymukhamedov have inaugurated the direct railway link between the countries: Bolashak (Kazakhstan) – Serkhetyaka (Turkmenistan) section in Mangistau oblast, Tengrinews.kz reports citing the press-service of Kazakhstan Temir Zholy national railway company. This corridor allows to run direct freight traffic between the countries along the shortest route and lower the travel time of transit trains headed to Turkmenistan via Kazakhstan and back, the press-service writes. According to the presidential press-service, the presidents met with railroad workers and public representatives of the region during the opening ceremony. Nazarbayev greeted the citizens of the region and said that Mangistau oblast had a special meaning for the country. “This is a historical event for the oblast. The new railroad will not only simplify export of our goods but will also service transit freights. And all this means new companies and new jobs for Mangistau residents. The government is implementing major projects to create conditions for development of each region so that everyone is able to apply his or her skills and unleash the potential. We have a clear long-term Actions Strategy. By consistently implementing it we will improve the life of every family, every city and village,” the Kazakhstan President stressed. Nazarbayev noted that this project has become even more important in the last years. “The focus of the global trade, as well as production, is moving to Asia, enhancing the importance of access to Asian markets. Kazakhstan and Turkmenistan economies has demonstrated a stable growth over the recent years. But neither Kazakhstan nor Turkmenistan have a direct access to the ocean. The accumulated industrial potential called for searching for new markets and new applications,” he said. The President also stressed that implementation of the project was an indicator of economic stability of both countries. “It proves that we are capable of performing difficult technical, investment and organizations tasks. Today, when many countries are still overcoming the consequences of the financial crisis, we have managed to complete such a large-scale transport project,” the President said. Gurbanguly Berdymukhamedov noted that laying the foundation of the new economic space called to join the countries of Central Asia and the Caspian region with the Black Sea region and Transcaucasus countries would provide access to the countries of Northern Europe at later dates. “Our project is a step in joining the transport infrastructure in the Eastern direction with further access to the economic centers of global development like China, India and Asian-Pacific region. That means a more large-scaled cooperation from geoeconomic point of view, as well as a forward-looking vision of strategic prospects of development of our countries,” he said. Bolashak-Serkhetyaka section is a part of the future transnational railway corridor that will connect Kazakhstan, Turkmenistan and Iran and will set up a freights link between ground routes and sea routes in the Persian Gulf. According to the existing agreement between three countries, the interstate project is currently at the completion stage. The freight flow along the newly opened railway crossing is expected to involve mainly grain, oil and oil products. The new corridor will significantly increase Kazakhstan’s transit potential and open a path for locally-produced goods to new markets. Construction of Kazakhstan part of the corridor, Uzen-Bolashak 146km section, started on September 30, 2009. Nursultan Nazarbayev launched the construction process. The new line is a modern railroad with advanced infrastructure. The road has two new stations with gridiron and 5 interstations. The line is equipped with communications, alarm, centralization and blocking systems. Fiber-optic communication line was laid at Mangyshlak-Uzen-Bolashak section. All stations and junctions have power supplies. Auxiliary buildings and facilities were built at Uzen and Bopai stations and all junctions. The cost of construction made 65 billion tenge ($433 million). Kazakhstan content made 80 percent in the project. Over 2 thousand jobs were created during the construction period. Over 800 Kazakhstan citizens will receive jobs and housing at the new railroad after its launch.