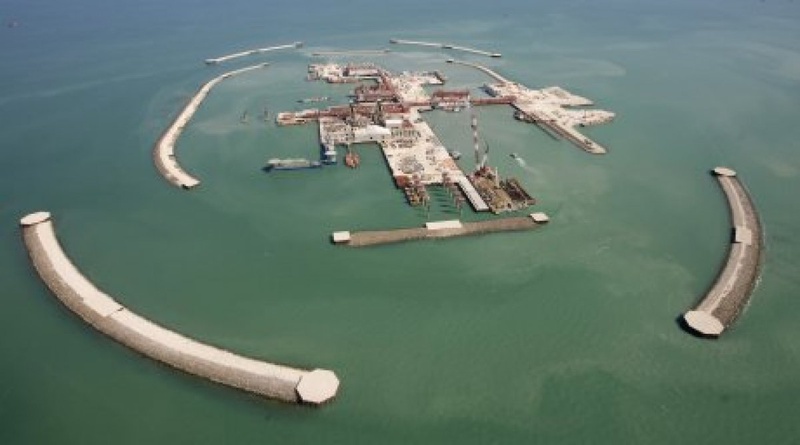 Kashagan oil and gas field. ©REUTERS
CNN Money has tagged gigantic Kashagan oil and gas field in Kazakhstan the most expensive energy project in the world. Its development has already absorbed $116 billion, which makes the project one of the most expensive discoveries of the last 40 years. The field is located in Kazakhstan close to Atyrau city in the northern part of the Caspian Sea which makes oil transportation challenging. The logistics of the land locked area requires a network of railroad lines, pipelines and sea routes. Local sharp continental climate makes it a problem as well. The northern part of the Caspian Sea is covered with ice for almost 6 months of the year and because of shallow waters oil production requires construction of artificial islands. Temperatures in the area fluctuate from -40 degrees Centigrade in winter to 40 decrees Centigrade in summer. Ice drifts and ice scouring place heavy constraints on construction activities. High pressure in the oil bearing layers and high content of highly toxic and corrosive hydrogen sulphide (H2S) make extraction extremely complicated and technologically demanding. Earlier Tengrinews.kz English reported that ConocoPhillips was intending to sell its stake in Kashagan project to Indian ONGC Videsh Limited. However, Kazakhstan Oil and Gas Minister Sauat Mynbayev declared that ConocoPhillips did not officially notify the Kazakhstan’s Government about this deal. Kazakhstan independent oil analyst Olzhas Baidildinov believes that ONGC’s entry into the project is unlikely and the announcement is going to prompt China into action: “I believe that considering the escalation of conflict between China and India, ONGC is like a “red flag” to Chinese state corporations. I think that seeing ONGC’s offer, Chinese CNPC and CNOOC will be ready to overpay for this asset or will more willingly make concessions. Entry of Chinese state corporation into this project is more beneficial for Kazakhstan. Commercial production at Kashagan is expected to start in December 2012-June 2013. Phase 1 of this project provides for production of around 370 thousand barrels of oil a day with a possible increase to 450 thousand barrels a day. Phase 2 will increase the production to 375 thousand barrels a day and keep it flat for at least 3 years. The field was discovered in 2000 and was one of the larger discoveries in that decade. The field's commercial reserves are estimated to made from 9 billion barrels to 16 billion barrels of oil. The total geological reserves are estimated at 35 million barrels. The natural gas reserves are estimated at over 1 trillion cubic meters. The consortium developing the field comprises Eni, Shell, ExxonMobil, Total and KazMunaiGaz (with a 16.81% stake each) as well as ConocoPhillips (8.4%) and Japan's Inpex (7.56%). Here is the top 10 rating of the world's most expensive energy projects made by CNN Money: 1. Kashagan, Kazakhstan ($116 billion) 2. Gorgon, Australia ($57 billion) 3. Ichthys, Australia ($43 billion) 4. Bovanenkovskoye, Russia ($41 billion) 5. Australia Pacific LNG, Australia ($37 billion) 6. Wheatstone, Australia ($35 billion) 7. Queensland Curtis LNG, Australia ($34 billion) 8. Kearl, Canada ($33 billion) 9. GLNG, Australia ($30 billion) 10. Three Gorges Dam, China ($28 billion)