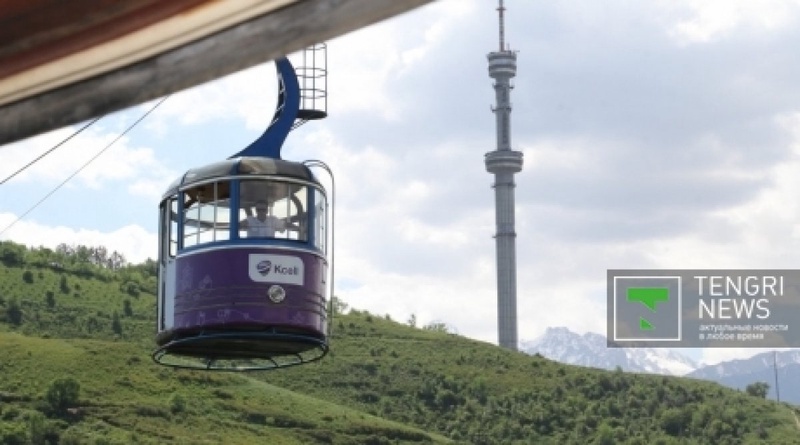 A new gondola cableway is going to be built in Almaty by spring 2015. The new cableway will be built by a French company POMA that has already signed a memorandum with the Koktobe directorate, Tengrinews reports.

The cableway to Koktobe Hill was last reconstructed nine years ago. According to the site's directorate it still meets the technical requirements, but has became somewhat obsolete. "Passengers are carried by two cablecars: a blue one and a red one. They arrive every 15 minutes. The visitors have to wait. There are long queues,” said the CEO of Koktobe Park Nurlan Kaziyev. The cableway the way it exists now, simply cannot adequately service 2000 people a day, he said.

The price of the ticket will remain the same – 2000 Tenge ($11), but with the increased number of those using the cableway, the expenditures to reconstructed the cableway will be recovered in 5 years, he said.

During the reconstruction, all other facilities of the park will operate as usual, including the park itself, the zoo, the playgrounds and restaurants.

According to Fabien Felli, Export Director of Poma, there will be 17 cable cars cruising between Almaty city and Koktobe Hill after the first phase of the project is completed. The number of cars will be brought to 24 at the later stage. "This cableway is out transport artery between the city and Koktobe, the tourist route to a resort area of the city. We would like to bring the gondola cableway to a new technological level. We are planning other projects [in Kazakhstan] in the future,” he said.

The length of the gondola cableway will make 1,727 meters. At the speed of 6.2 meters per second it will be covered by cable cars in 6 minutes. Each cabin will have ten comfortable seats. The maximum elevation above the ground will be approximately 80 meters.

However, not everybody is excited about the new project. Vyacheslav Rybkin, a local tourist guide, believes that the existing retro-style gondola cableway added to the city’s charm. Now, the red and blue cabins will become showpieces in the hill park.

The reconstruction will start in September this year.