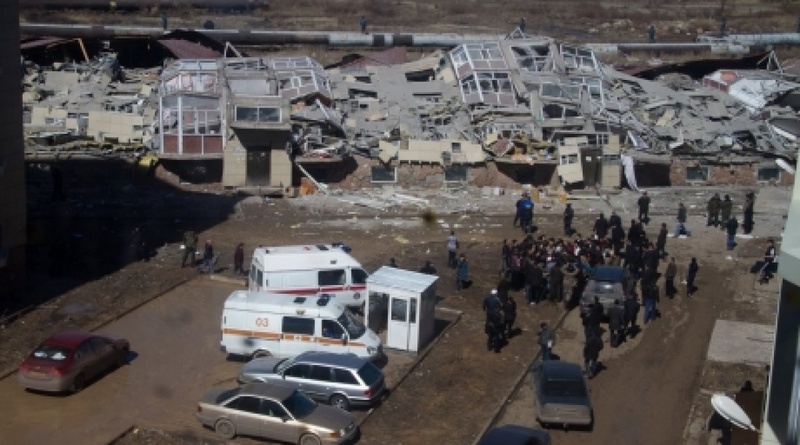 Photo by Aleksandr Yermolenok©
According to the Department of Emergency Situations of Karaganda oblast, building No.7 of Bessoba region collapsed at 10:55 a.m.
Continuation
1.
Another 5-storey Bessoba building collapsing in Karaganda
2.
Bessoba residential complex will be demolished: Karaganda Mayor
The 5-storied building had 8 entrances, four of them collapsed. The total number of apartments in the building is 120, Tengrinews.kz reports. According to the preliminary information, 65 apartments collapsed. Residents had moved in into 38 of them, the 27 were still unoccupied. 17 apartments in the collapsed building were awarded as part of the state housing program. Where as many of the mortgages were issued by Eurasian Bank. According to Karaganda Emergency Situations Department, 100-percent of people had been evacuated from the building. Property had been moved out from these 120 apartments before the collapse. The total of 111 people were evacuated. Before the collapse the building was tilting to one side for several days. Starting with a small crack the inadmissible deviation of the building's corners reached 720 mm between April 1 and April 5. Bessoba. Exclusive video from the accident site Photo by Gulya Bagaudinova Tengrinews.kz reports from the accident site that the building is laying in ruins, cordons are around the site. Police officers, National Security Department officers and Emergency Situations Department's experts are near the building, checking that there are no victims. The building's residents are gathering around the building. Authorities are arriving as well. The experts are waiting for special vehicles. One of the residents felt bad and was provided with the required medical aid. "Special prosecutor of Karaganda oblast has initiated a criminal case on the fact of the building collapse under article 307, part 4 of Kazakhstan Criminal Code, i.e. misuse of authorities," press-secretary of Karaganda oblast Prosecutor's office Yerlan Zhanpeissov said. Commenting the accident, Karaganda oblast Emergency Situations Department stated: "The collapse of section No.2 of the building did not damage section No.1 of the building (entrances 1, 2, 3 and 4) or the neighboring buildings. There are no secondary damage factors (fire, power shocks, flooding). Photo by Aleksandr Yermolenok Construction officials have checked the neighboring section of the building and concluded that there was no threat of it collapsing as well. In several hours residents of the neighboring buildings will be allowed back into their apartments. Neighboring buildings will be additionally inspected in the nearest two weeks. Additional police forces have been brought to the site and double cordoning has been arranged. The dog handlers are working at the site. Karaganda Akim (Mayor) said that residents have been provided an office in the city administration building, where they can gather together to discuss compensations payment. The city administration will pay the residents a compensation of 300 million tenge ($2 million). There will also be an option to receive an apartment in new buildings in different regions of the city. Tengrinews.kz reports from the accident site that the Akim (Mayor) arrived to the accident site. He promised compensation to the residents for their loss. He also promised to protect the building from pillage. "The investigation has revealed that Servispromsnab company constructed this Bessoba residential complex as an equity construction project (the construction was partly funded from the money prepaid by the future residents). In 2007-2010 the company received the money from the future owners, but the Mr. Malyanov, director of the company, disappeared with part of the money even before construction of some of the company's projects was fully completed," press-secretary of Karaganda oblast financial police department Gulzhan Suleimenova said. Andrey Malyanov has been on the international wanted list since last summer. His company is over 300 million tenge ($2 million) in debt to banks on loan repayments. Earlier Tengrinews.kz reported that Bessoba residential complex in Karaganda was expected to collapsed any moment. The state of the bearing structures of the building were rated as "emergency condition" and the threat of collapse was officially acknowledged. The multi-apartment residential building, constructed at the cost of the interest participants (future owners), was put into operation in 2009. The building started cracking because of displacement of the main structures. A state of emergency was introduced in the building. The residents were evacuated.