Sirens blaring, blood on the roads, weeping relatives: nightmare scenes played out on the streets of Paris on Friday night as at least 120 people were killed in simultaneous attacks.
14 ноября 2015, 12:38
Новостью поделились: человек
©Reuters

Sirens blaring, blood on the roads, weeping relatives: nightmare scenes played out on the streets of Paris on Friday night as at least 120 people were killed in simultaneous attacks, AFP reports.

Pierre Montfort lives close to a Cambodian restaurant on Rue Bichat, where one of seven attacks took place in a night of bloodshed not seen in decades.

"We heard the sound of guns, 30-second bursts. It was endless. We thought it was fireworks," he said.

Another witness described the scene: "For a moment, we could only see the flames from the gun. We were scared, how did we know he wasn't going to shoot the windows?"

Florence said she arrived by scooter a minute or so after.

Police officers and rescue workers are seen at the Petit Cambodge restaurant after a shooting in Paris. ©AFP

"It was very calm -- people didn't understand what was going on. A young girl was being carried in the arms of a young man. She seemed to be dead."

Forensic police search for evidences outside the La Belle Equipe cafe, rue de Charonne, at the site of an attack. ©AFP

A man said he heard shots ring out, in sharp bursts, for two or three minutes.

"I saw several bloody bodies on the ground. I don't know if they were dead," he said.

"There was blood everywhere," said another witness.

Outside the Saint-Louis Hospital in the north of the capital a police cordon had been set up.

Standing nearby, a tearful man said his sister had been killed. At his side, his mother burst into tears and collapsed into his arms.

"They won't let us pass," he said, pointing at the intersection 50 metres (yards) away.

Further east, near the Bataclan concert hall and not far from the scene of another deadly attack in January on the offices of satirical French magazine Charlie Hebdo, the area was on lock down.

Police say around 100 people were killed at the music venue, with reports saying armed attackers shot dead people attending a rock concert one by one before police stormed the building.

A victim lies on the ground covered by a white sheet following an attack at rue Bichat, in central Paris. ©AFP

"My wife was in Bataclan, it's a catastrophe," said one man as he tried to run into the site but was blocked by the police cordon.

"All I can tell you is that it's worse than Charlie Hebdo," said a security officer.

In the north of Paris, near the Stade de France stadium, three explosions left at least five dead as France were playing a friendly football match against Germany. 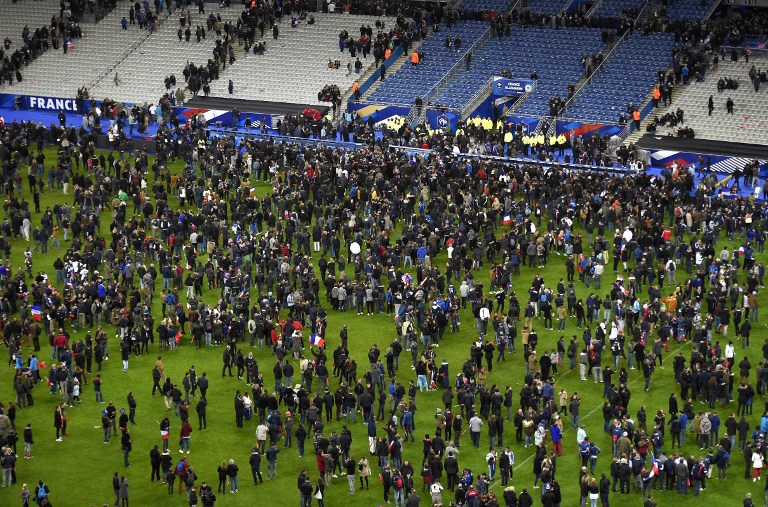 Football fans gather in the field as they wait for security clearance to leave the Stade de France in Saint-Denis. ©AFP

"We heard explosions 25 minutes after the start of the match. It continued as normal. I thought it was a joke," said Ludovic Klein, 37, who came from Limoges to watch the match with his 10-year-old son.