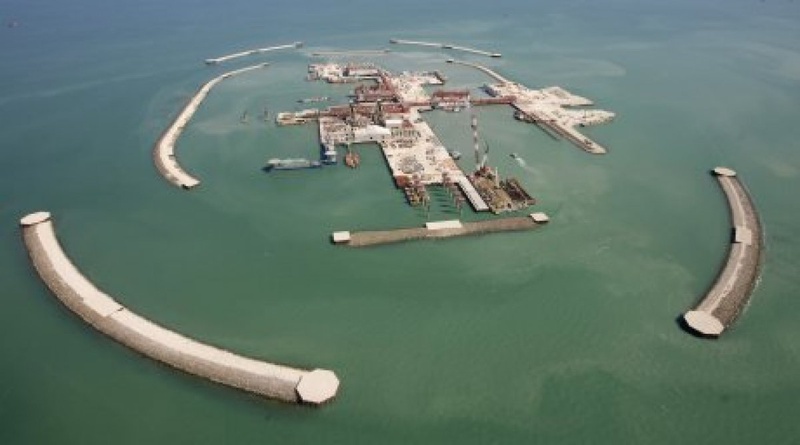 Kashagan oil and gas field. ©REUTERS
Kazakhstan is to take a decision on whether to exercise its preemptive right to purchase the СonocoPhillips’s stake in the consortium developing the giant Kashagan oilfield before May 25, 2015, Newskaz.ru reports, citing Kurmangazy Iskaziyev, Vice Chairman of the Board [responsible for geological exploration and prospective projects] at KazMunaiGas National O&G Company. According to the СonocoPhillips’s press-release as of late November 2012, the deal to sell the stake to India’s ONGC Videsh Limited was expected to be finalized in the H1 2013. ConocoPhillips’s proceedings from the sale are expected to reach $5 billion. The deal is to be approved of by the Kazakhstan’s Government. “Sure enough, journalists are dying to learn the details; the negotiations are under way, and the Government still has time before May 25 (…) as far as I understand that’s the date when there will be a certainty”, Mr. Iskaziyev said. He emphasized that “an interagency committee will be responsible for the final decision”. The Kashagan field, named after a 19th century Kazakh poet from Mangistau, is located in the Kazakhstan sector of the Caspian Sea and extends over a surface area of approximately 75 kilometers by 45 kilometers. The reservoir lies some 4,200 meters below the shallow waters of the northern part of the Caspian Sea and is highly pressured (770 bar of initial pressure). The crude oil that it contains has high ‘sour gas’ content. The development of Kashagan, in the harsh offshore environment of the northern part of the Caspian Sea, represents a unique combination of technical and supply chain complexity. The combined safety, engineering, logistical and environmental challenges make it one of the largest and most complex industrial projects currently being developed anywhere in the world. According to Kazakhstan geologists, geological reserves of Kashagan are estimated at 4.8 billion tons of oil. According to the project’s operator, the oilfield’s reserves are estimated at 38 billion barrels, with 10 billion barrels being recoverable. Besides, natural gas reserves are estimated at over 1 trillion cubic meters. The consortium developing the field comprises Eni, Shell, ExxonMobil, Total and KazMunaiGaz (all with a 16.81% stake) as well as ConocoPhillips (8.4%) and Japan's Inpex (7.56%). Tengrinews.kz reported late May 2012 that Kazakhstan and NCOC companies had signed an agreement to start commercial production at the giant Kashagan oilfield in the period from December 2012 to June 2013. NCOC, a consortium developing the giant Kashagan oilfield, plans to produce 75 000 barrels of oil per day at the initial production stage, Tengrinews.kz reported mid-May 2012, citing NCOC Vice Managing Director Zhakyp Marabayev as saying on the sidelines of a CIS summit on oil and gas. According to him, plans are there to bring the production figure up to 350 000 barrels a day or even up to 450 000 barrels a day at the first stage of the oilfield development. “The current facilities enable to produce up to 350 000 barrels a day (…) Should the gas injection capacities be expanded, we could produce up to 450 000 barrels a day”, he said at that time. Early October 2012 Tengrinews.kz reported, citing Kazakhstan’s Oil and Gas Minister Sauat Mynbayev as saying October 2 on the sidelines of the KazEnergy Oil Conference held in Astana, that ConocoPhillips might exit the project. “They have an intention of selling their stake (…) The Government enjoys the preemptive right to purchase. Then all the consortium member companies do have such a right. Each of the above mentioned may exercise the right (…) We don’t know anything yet”, Mr. Mynbayev said at the time. When asked if any of the member companies want to purchase the stake, he answered that “there have been such intentions (…) However, such a decision depends on long-term plans. I cannot provide any comments”, adding that “the intention to sell is just at the speculations stage”. The Minister said that should ConocoPhillips exit the project, the Product Sharing Agreement would remain unchanged. “Only the stakes may change hands, but contract obligations of both the government and the consortium should remain unchanged”, the Minister commented.