Apple profit falls for first time in nearly a decade 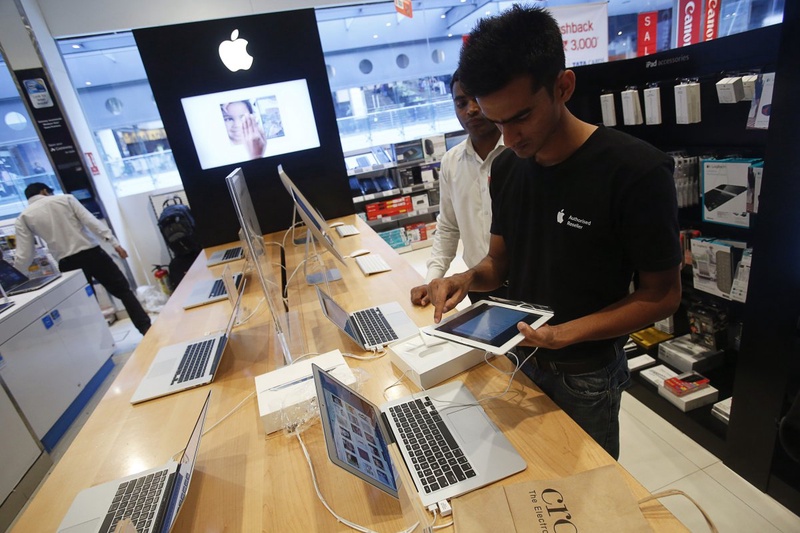 ©REUTERS/Vivek Prakash
Apple reported Tuesday that its quarterly profit dipped for the first time in nearly a decade as it squeezed less money from its champions in the competitive smartphone and tablet markets, AFP reports. The maker of iPhones, iPads, iPods, and Macintosh computers stepped in to bolster its stock price by announcing a plan to more than double to $100 billion the amount it will spend to buy back its stock and pay out dividends. Apple raised a coming stock dividend by 15 percent to $3.05 per common share. While Apple coffers bulged with $144.7 billion, the company said most of that money is offshore and it will be shrewder to borrow cash to implement the stock buy-back plan. "We will fund the capital return program from operations and borrowing," said Peter Oppenheimer, Apple's chief financial officer. Apple shares jumped briefly on the news in after-hours trades but slid back down to $403.95, about two dollars below where it was at the close of the Nasdaq. "They bought themselves some extra time," Silicon Valley analyst Rob Enderle said of Apple tapping into its cash reserves to pay off investors. "They are basically selling off Apple's future to prop up Apple's stock price in the short term." The move veers from the way late Apple co-founder Steve Jobs fiercely guarded cash reserves. Apple shares jumped briefly on the news in after-hours trades but slid back down to $403.95, about two dollars less than at the close of the Nasdaq. The California-based company posted a profit of $9.5 billion on revenue of $43.6 billion in the first three months of this year, compared to a profit of $11.6 billion on $39.2 billion in the same quarter in 2012. It said its gross margin, or the amount of money it makes in profit from its devices, shrank to 37.5 percent from 47.5 percent. The number of iPhones sold in the quarter rose to 37.4 million from 35.1 million during the same quarter last year. The number of iPads sold surged to 19.5 million from 11.8 million a year earlier. Meanwhile, sales of iPod MP3 players dropped by more than a million to 5.6 million and Macintosh computers sales slipped about two percent to just below four million, according to Oppenheimer. The Apple board raised the overall stock repurchase target to $60 billion from $10 billion. Apple chief executive Tim Cook said that the decline in Apple stock in recent quarters has been "very frustrating for all of us." Shares in Apple are well below their 52-week peak above $700 in September as the tech giant faces tougher competition from South Korea's Samsung and others. "Although we've achieved incredible results, we acknowledge our growth rate has slowed," Cook said during an earnings call with financial analysts. "We will continue to focus on the long term and we remain very optimistic about our future." Cook remained adamant that Apple was well-positioned in the booming smartphone and tablet markets. "We have a lot more innovations in the works," Cook said, promising "some really great stuff coming in the Fall and across all of 2014." "For the size company it is, Apple is plugging along very nicely," said Forrester analyst Frank Gillett. "The question we are asking ourselves is whether they can bust out a new category. My hunch is there are a bunch of new things brewing." Revenue in Greater China was up 11 percent to $8.8 billion, with iPad sales more than doubling despite Apple reporting that growth had slowed there. China served as an example of an Apple strategy to win over smartphone buyers with affordable prices on iPhone and iPad models, letting margins shrink in order to build ranks of loyal customers. "China has an unusually large number of potential first-time smartphone buyers and that is not lost on us," Cook said. He cited data showing that Apple ranks impressively when it comes to customer loyalty and the willingness of users of its gadgets to spend money on digital songs, music and apps at the iTunes store. "We do want to grow faster, but we don't look at it as the only measure of our health," Cook said. The iTunes shop pulled in more than $4 billion in revenue in the first three months of the year, setting a new record, according to Oppenheimer.